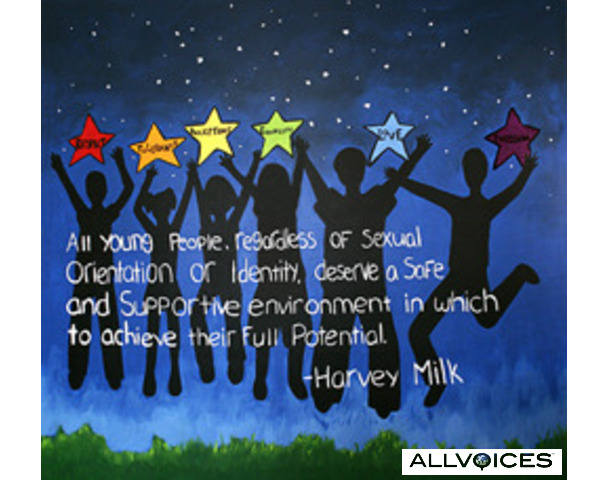 Young gay men are more apt to commit suicide than those from any other demographic group. The “why” of this is not that difficult to determine. Even in these so-called enlightened days, we still live in a world that is judgmental and homophobic. If one is a resident of the United States, then that homophobia is particularly virulent, and the judgmental attitude permeates all aspects of daily life. The influences of the various religions is particularly strong, and it seems to be the business of the churches to concern themselves with the sex lives not only of their adherents, but of all people living within the country’s borders. Many of the more vocal so-called religious people are also fixated on the belief that the bible is literally, not figuratively the word of god. They delight in quoting certain passages from Leviticus. Strangely though, the only references they seem to want to live by are those that are taken to condemn homosexuality. What makes the condemnation of so many of these zealots so hard to take is that there is a very pointed selectivity about the sins condemned. Christians do not generally hold to the dietary restrictions outlined in that book of the bible, nor do they adhere to the holy encouragement to kill your children or sell your daughter into slavery should they misbehave or show disrespect to you. This is the appalling thing: The people who preach the proscription against homosexuality do not seem to understand that the proscription was against any sexual activity that could not produce a child. This includes not only homosexual activity, but also the use of birth control, coitus interruptus or the spilling of one’s seed upon the ground (God smote Onan for this one) and, of course, Masturbation. These were laws given to a tribe of wandering people, who had a very high neonatal death rate. It was to ensure that the tribe would survive.

Whatever the reasons for that selectivity, we see it as being used by not only the religious fundamentalists, but also by the Political Right in the United States. The common instigating factor that can be laid to both of these groups is financial greed. They have demonized all gay people to generate fear, and to encourage cash flowing to them as the agents that could protect their members and, indeed the country, from the rampant homosexual menace.

It seems that there was no thought given to the ramifications of their virulent finger pointing. There was no thought given to the horror these self-righteous ranters were inflicting on youngsters who were recognizing their own gayness. The action of the church people and the politicians has been more than uncaring and because of refusing to see the ramifications of what they are doing, their actions are down-right negligent. They are criminal.

In the mind’s eye they see gay people as less than human, and since they are less than human they can be used and abused for any reason, and it can be done by these groups in “good conscience.”

Because this American society is one in which the influence of religion and politics is far greater than either actually warrants, the influence of both on the daily lives of many individuals is powerful and far-reaching. A child who begins to recognize he may be queer has to not only deal with changes within his own body, but also has to deal with the reproaches of the prejudice inculcated by the self-righteous pronouncements of the Fundies and by the Religious Right. The prejudices are far reaching, in that many families have swallowed the line fed to them by their churchmen and women. Too often the child enters into his own sexuality with a family that believes that being gay is worse than being a murderer. The child has been taught that living in a society where he is not a first class citizen is what he can expect. In most states, he does not have the right to marry, in Florida he does not have the right to adopt children, he does not have the right to serve in his country’s Armed Forces, he is not allowed to give blood, (this although HIV/AIDS also effects the heterosexual population, and all blood is tested for the virus before it is deemed to be safe to administer,) he does not have the right to hold his lovers hand in some areas of this country, he is told that the love that elevates him will lead him to hell, he is told that he cannot be gay and a Christian at the same time, he is told that the only reward his love can bring him is disease and an early death. He may be told all of this covertly, or more likely and more often overtly. He is demonized by his church and by representatives of his government. Too often there is little or no support from a family made conflicted by these same forces.

Suicide. To repeat, young gay men are more apt to commit suicide than those from any other demographic group. When you are constantly barraged with the message that you are less than human, when you are repeatedly told that you are bad and are not what god and country expect you to be, when you are castigated in the Congress and in the church, you internalize the conflict and you may even begin to believe it all. Sometimes the belief is that there is no other course and that you are not worthy to live. Abject aloneness can lead to self destruction. Self-destructive behavior can result in alcoholism and drug dependency, both of which have a high incidence in the gay community. It can also result in the immediate death of the homosexual youngster through homophobic gay bashing or more tragically, from his own hand.

Since the start of the academic year, we have seen too many of our young fall into the pit that is aloneness, depression, fear and despair, and results in the killing of the self. The ages of those who have sought peace in this way make it an all the more tragic choice: 13, 15 and 19 are the ages of three that have been publicized and therefore come to mind. The deaths of these youths can be laid at the doorstep of every preacher, every politician and every person who has preached hate and perpetuated the hate that has kept these kids closeted and therefore isolated. These people are every bit as guilty as if they had pushed a boy off the bridge, kicked away the chair under the hangman’s noose or fired the gun that ended the lives and the promise of a hurt and still hurting youngster. They can deny it, they can hide behind archaic writings but the guilt is theirs. They have harmed our children and their own children. They have caused a life to be ripped out, a life that was a part of the future.

Dan Savage the writer and “out” gay man has started a program using You Tube. He calls it the “It Gets Better Project” It provides a forum for gay people to offer encouragement to young people who are admitting their sexuality to themselves and maybe to others, and are experiencing some of the hate. It provides this forum so that those who have lived through the turmoil can speak about the battle and the rewards. We can all do the same in our own lives with those who we may know. We can speak frankly and honestly when we are questioned, and most importantly we can send the message that no one is fighting by themselves. We can join and support PFLAG (Parents and Friends of Lesbians and Gays.) We can give support to starting or maintaining a GSA (Gay Straight Alliance) in the local high school. We can recognize and live the fact that we are all in this together.

There are already those who have decided the way to answer Mr. Savage is with biblical rants and the threat of hell-fire for him and for all gay people. The ratchet and the rhetoric are turned up. These people are of the “god hates fags” ilk, and in truth, are to be pitied. Their life is consumed with hatred of the homosexual and a desire that he be eradicated from the earth. How frustrating for them that homosexuality has been there since the dawn of time, and will be there until the end of history.

For suicide statistics and help lines consider the following links:

The David: Growing concerns about fear mongering and resultant bullying behavior should not be ignored nor taken lightly. “Even in these so-called enlightened days, we still live in a world that is judgmental and homophobic…”