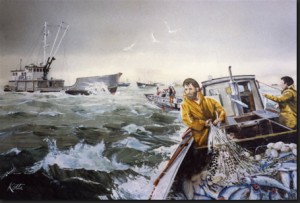 Northern Dynasty has not yet applied for permits, but their current proposal involves both a large open pit and an underground mine, as well as removal of the water from the headwaters of Upper Talarik Creek and the Koktuli River ( important fish habitats). The site sits at the headwaters of two major Bristol Bay drainages ( Nushagak and Kvichak), and potentially poses a large threat to the region’s water and salmon. This proposal has become a  major political issue in Alaska, pitting pro-mining forces against local native villages and commercial and sport fishermen.

It’s beginning to appear that one hundred million dollars to persuade the Alaskan people as to the worthiness of this colossal endeavor is not going to be enough.  Their most formidable foe is back woods flight engineer and businessman named Bob Gillam, who has allied conservationists, sportsmen, commercial fishermen and Natives to challenge an international mining consortium and Alaska’s pro-development establishment. For the mining companies in this fight, the stakes are high—billions of dollars. For Gillam and his allies, what is at stake is the future of the fish, forests and rivers of Alaska’s Bristol Bay region, which they believe are in imminent danger of destruction.
Gillam is the president of McKinley Capital Management, an international investment firm he founded in 1990. Its success has earned Gillam, who grew up in Anchorage, Fairbanks and Juneau, the title of Alaska’s richest man.  With 1/10th the amount of money to launch his own campaign, which includes 80,000 bumper stickers, some television spots and a web site, his following has caused enough controversy for the Pebbles advocates to complain that Gillam isn’t fighting fairly.  An anonymous site, claiming to be affiliated with the Juneau branch of the Miner’s Association asks this question, “Can one very rich man use his money to subvert Alaska’s political and regulatory processes, wound its economy, and hurt Native people throughout the state just to protect his vacation home?” The answer depends on the Alaska Public Offices commission, a state agency that oversees election laws. 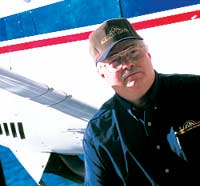 Northern Dynasty filed a court complaint against Gillam, stating he had failed to disclose the amount he’d spent on anti-Pebbles advertising.  Says Gillam, ““No fines have been levied against me.  Of the eight charges against me, all but two have been dropped. These two are still pending, but five-figure fines have been proposed against a group of foreign mining companies who support the Pebble Mine Project for failure to report almost $4 million spent on Ballot Measure 4 on time.”

Ballot 4 was a measure put to the vote of the Alaskan people that would place stricter regulations on large scale mining through the Clean Water Act.  Although pre-election polls had shown support for the bill, it was defeated 57 to 43%.  Gillam proponents blamed then- Gov. Sarah Palin who, a week before the election, declared that she was “taking off her governor’s hat” to say that she would be voting no. “It’s not a level playing field,” Gillam said. “There are very few people who can oppose them.” 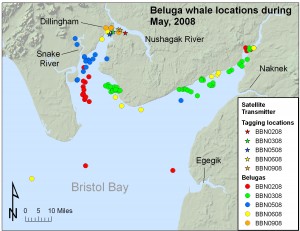 Fortified by their success against the measure, Northern Dynasty extended its mining claims.  On July 12, 2010, it purchased an additional 23 square miles  to their roughly 163 miles of mining claims on state land to the northwest of the Pebble claims. The claims had previously been held by a much smaller mineral exploration company, Liberty Star Uranium & Metals Corp. of Arizona.

Northern Dynasty officials said they aren’t currently interested in exploring the 23 miles that they have acquired from Liberty Star.  “The interest is in consolidating the Pebble land package,” said Sean Magee, a spokesman for Northern Dynasty, based in Vancouver, British Columbia. His company is the smaller of the two companies that have joined together in the effort to develop Pebble.

Pebbles mining interests propose that development of the of the project, which would be located on the east and left flanks of Mt. Iliamna, an active volcano in the range that rings the Bristol Bay, would be beneficial to the economic prosperity of Alaska.  Opponents say this isn’t true.  While the mine would create four to five hundred new jobs for some of the inhabitants, it would destroy the watershed that is the spawning ground for one of the last remaining areas for harvesting wild salmon.  According to a 2007 University of Montana study on the economics of wild salmon watersheds, nearly 7,000 jobs depend on the salmon fishery, worth nearly $300 million per year. 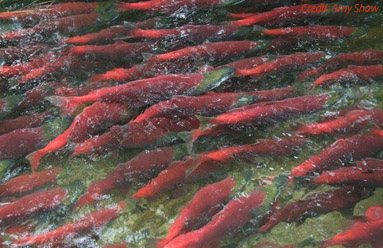 Recently,  the Environmental Protection Agency held a public meeting to listen to all sides of the argument concerning the development of Pebble’s Mine.  Representatives of a dozen Southwest communities came forward to testify as to the threat they felt the massive project would impose on their way of life.

“If you take away who we are, our natural resources, that would be terminating us as a people,” Mary Ann Johnson from the tribal council of Portage Creek told EPA Administrator Lisa Jackson last week, during a listening session at Dillingham High School.

“The salmon have saved people from starvation,” said Dennis Andrew, of the village of New Stuyahok, noting the importance of the Bristol Bay watershed’s abundance to both people and wildlife. “It is so important that they continue to spawn in our waters.”

Among the speakers were Yu’Pik and Inuit’s whose families had inhabited the region for thousands of years.  Their subsistence life styles are dependent of the fish and sea mammals in the waters of Bristol Bay and a land bountiful in wildlife and berries.

“We lead a very rich lifestyle in a resource-rich area,” said Tom Tilden, first chief of the Curyung Tribal Council in Dillingham. “We can continue to live in this area as long as the resources are protected.”

Although the EPA listed the event as a listening device on the massive copper, gold, silver and molybdenum deposit that could be mined at the headwaters of the Bristol Bay watershed,    no proponents of the Pebbles Mine project showed up. 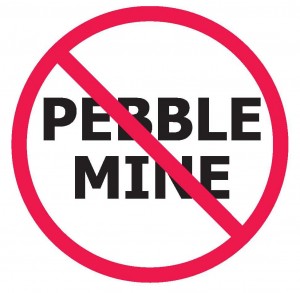 In an interview with Michael Pollan, author of the book, “Four Fish: The Future of Last Wild Food,” Leslie Cole of “The Oregonian” asked the question, “A lot of consumers are interested in the issues surrounding wild and farmed seafood. What’s one thing most people don’t know about that they should be paying attention to?”

Pollan answered, “a much ignored problem in the lower 48 is the proposed Pebble Mine on Bristol Bay in southwest Alaska. I find it incredible that on the one hand we’re trying to speed a transgenic salmon (one that carries genes from other species) through the FDA to boost (farmed) salmon production, and on the other wing of government we’ve got support for this huge copper and gold mine project … in a seismic area. And if that berm breaks, you’ve ruined probably the most productive wild salmon grounds in the world.”

The opening of Pebbles Mine should not just be considered a US issue, but a global one.  The ability to sustain a crowded population with healthy, natural foods has been limited by pollution, over-farming and industrial waste.  While there are currently few options for weaning an energy hungry world away from the consumption of oil, we must question the need for mass scale development of minerals in an area more abundant with wildlife than the ANWR reserve, and more integrally a part of the ocean’s ability to sustain life.

The mining companies from England and Canada say 40 million ounces of gold and 42 billion pounds of copper wait, making it one of one of the largest copper deposits on Earth. Developing the massive gold deposits will not help the smaller mines.  Gold prices have risen over the last year through demand, allowing many of the small miners to enjoy a bit of prosperity.  An abundance of gold would only devalue the price.  The mine’s arsenic, mercury, acid drainage and copper tailings could destroy salmon habitat,  and the dam proposed to contain it in the earthquake-prone region is not enough protection.

Although Northern Dynasty insists that it is taking every precaution to create a low environmental impact, the residents of the Bristol Bay area claim they are already feeling the effects of the Pebbles exploration.  They testified that activities, which include frequent helicopter flights and the presence of heavy equipment, as well as testing tools,  are damaging king salmon runs and causing many animals in the Mulchatna caribou herd to migrate elsewhere.

Northern Dynasty has pledged an up to $73 million in Alaska this year as part of its ongoing effort to advance the project, according to the Pebble Partnership.  Despite an active advertising campaign, the inhabitants of the Bristol Bay area have said “no”.  Said EPA administrator, after  listening to members of the tribal Council who protested the opening of Pebbles, “there is no such thing as a choice between a job and clean water. You are entitled to both.”

The world is entitled to both, but it will have nothing if the decimation of our last renewable natural resources continue.  Once we defile the pristine beauty of the Bristol Bay, we can never bring it back, we can never preserve it for future generations.  Once we have disrupted the cycle of life in one of the world’s largest oceanic bread baskets, we will have destroyed all hope of being able to restore the oceans ability to create a healthy eco-system.  The Alaskan people have made a choice.  One hundred million in advertising is not going to change it, although the campaign continues.  They are entitled to make their desires known, for this is their land, their future, their children.  More importantly, the world is entitled to a place where earth can continue its natural cycles without the disruptions of modern technology weakening the overall health of our oceans.  It is entitled to a chance to recover.  The benefits of additional stores of copper, gold and silver by what are already the wealthiest mineral companies on the planet is not going to offset the loss of clean water and natural, healthy foods.

By: Karla Fetrow- The opening of Pebbles Mine should not just be considered a US issue, but a global one as we strive to sustain an over-populated planet with healthy foods.