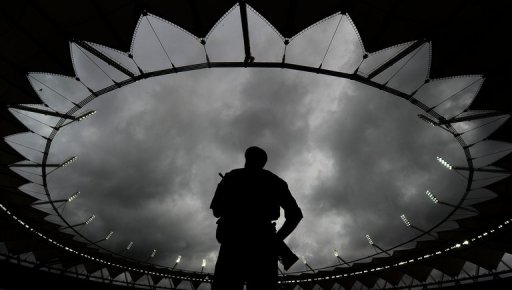 Sometimes I’m so glad that I’m a self-confessed, unashamed, card-carrying traitor, because I can find fun and humour in situations where ultranationalist ultra patriots would either foam at the mouth or want to crawl away and die

I suppose most of you are at least vaguely aware that there exists something called the British Commonwealth (the “British” is tacitly omitted these days, but it’s still there, never fear), an association of ex-British colonies which for some reason want to keep telling themselves that since they were once ruled (and usually looted and wrecked) by the Brits, they should remain, however notionally, tied to the Union Jack.

Well, this Commonwealth thingie has its own Games, which come around every four years, just like your regular Olympics and – if you’re Asian, as your favourite smartass Bill the Butcher is – the Asian Games, or Asiad. And India having, for whatever reason, bid for it away back in time, it’s due to be held in Delhi – in October. Exactly 36 days from now.

So is Delhi all ready for the games? Yes, of course it is; ready to make as much money as possible, as fast as possible [1]. The amount of corruption involved is so gigantic that the cost of these Games has risen 114 times since they were first allotted to Delhi, from 500 million (in US dollars) to an estimated 7.3 billion [2]. Money has been made out of everything from toilet paper (allegedly bought at a cost of $80 per roll; what are they made of, gold?) to treadmills (rented at a higher cost than it would have taken to buy them outright); money has been made out of everything money can be made from.

And so, how is Delhi suited for these games, just over a month before they are due to begin?

* Well, the beggars and homeless people have been arrested, moved away from the city, and dumped to fend for themselves [3]. Beggars and suchlike are out of place in a happening nation with a booing, I mean booming, economy, you know.

* The stadiums, roads and housing for the athletes and officials, not to speak of the expected tourists and so on, are still so far away from completion that there’s not a way in hell they can be finished in time, let alone clearing the mountains of rubble off Delhi’s streets and filling in the holes.

* The British queen, as the permanent head of the Commonwealth (never forget that it’s the British Commonwealth) has decided, “In a cold fury”, not to attend the opening ceremony, and good thing too. [5]

* And now, as the crowning touch, rain has fallen. You know, those drops of water that tend to tumble out of the sky around this time every year in North India. Who knew that could happen? Well, actually, just about everyone…except the organizers of these Common Stealth Gains, I mean, Commonwealth Games.

So what’s the significance of the rains? Well, it means that, this being that up-and-coming booming economy and global powerhouse, India, everything stops when it rains, since the choked drains and broken roads mean everything gets flooded. I am actually grinning with delight as I write this. Some superpower in the making, we are!

And what’s the response of the government of Delhi, in the person of its Chief Minister, Sheila Dikshit (known as one of India’s better administrators, no less) to the mess? Oh, you’re going to love this.

While extending the deadline for the last acceptable date for completing all the work for the fifth time, to 15 September (an utterly obese chance if there ever was one) this is what she had to say [6]:

“Aisa lagta hai ke Indra devta humse kuch naraaz hain (It seems the rain god is unhappy with us). I will appeal to him to him bring some sunshine so that work can be completed.’’

Ah, so her office must be busy drafting applications to the rain god, Indra. If they run out of ideas on how to word the application, they can always come to me.

And these are the clowns who were (are?) planning to bid for the 2020 Olympics. My absolute dog.

As a card-carrying traitor, I’m waiting eagerly for the Games to begin on 3rd October.

The whole thing should be a wonderfully fascinating mess.

By: Bill the Butcher-The amount of corruption involved is so gigantic that the cost of these Games has risen 114 times since they were first allotted to Delhi, from 500 million (in US dollars) to an estimated 7.3 billion.