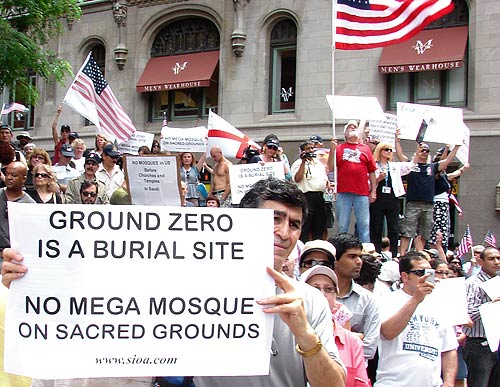 “Applying contemporary standards of tolerance to medieval Muslim history and policy does a disservice to the prospects of reconciliation in our times. The assumption by some that an inherent medieval Islamic intolerance prevailed and that it underlies present-day Muslim terrorism is a distortion of reality. On the other side, the self-ascribed mission of the small minority of “card-carrying” Islamist fundamentalists to revive the pristine Islam of the Qur’an is itself a distortion that conveniently overlooks the pluralism of medieval Islam and the promise of freedom of religion embedded in the Qur’an and in other foundational Islamic texts. Until non-Muslims begin to understand Islam in all its facets, we will be destined to live in ignorance of the “real” Islam and to act out of fear. The presence of Muslims in our midst and of mosques like the one planned near Ground Zero, which will be an educational center as well as a place of prayer, is one good way of transcending this ignorance.”- Mark R. Cohen

I’ve been thinking a lot lately about the hullabaloo surrounding plans to build a Mosque two blocks away from the site of “ground zero” of the World Trade Center at 45-47 Park Place in Lower Manhattan.

The property is privately owned and the project is being managed by Sharif El-Gamal, chief executive of SoHo Properties.  The group funding the project: The Cordoba Initiative has been under fire and found itself a political target with people up for election on both sides of the fence calling for investigation into their funding.  As if a 15 storey recreation and education center which also houses a house of worship were somehow going to unravel the fabric of America.

But this is apparently just what Rick A. Lazio, a Republican candidate for governor, appeared at the vote, in an auditorium at Pace University near City Hall, to oppose the project, was thinking.  Calling on his rival Attorney General Andrew M. Cuomo, to (ask for) “transparency,” Mr. Lazio said. “If they’re foreign governments, we ought to know about it. If they’re radical organizations, we ought to know about it.”

He added, “This is not about religion. It’s about this particular mosque.”

This seems like it is less and less about religion or this particular mosque which in fact is much more than a mosque, it will be modeled after other cultural centers throughout cities all over the United States as a refuge, a place of learning and a place to come and understand one another.  It really shouldn’t be an issue given that the building currently occupying the space is already an Islamic place of prayer and worship.   It is only the reconstruction and political posturing that has made it stand out so starkly to people who feed off the evening news.

People are firing up their blogs and painting their placards claiming shock, disgust and downright hatred toward Muslims who would build a house of worship in a place that Christian America has claimed for itself as sacred…to Christians that is.

The planned structure which has already been approved is to be called Cordoba House, named for the Spanish city where Muslims, Jews, and Christians together created one of the most fertile and creative civilizations in the world. And just in case that in itself is in question let’s remember the Byzantine era is often described as the “Golden Age” of learning in which Muslims, Christians and Jews lived together in relative peace.  Enough peace that the building of libraries and Academies became more important than the building of defensive structures.  Literature, poetry, mathematics and science flourished during this time.

Daisy Khan and Imam Feisal the husband and wife duo who envisioned this community center meant it to be a place where people can come and learn about Islam.  Daisy Khan expressed concern that critics of the Islamic cultural center have misunderstood its creators’ purpose.  The center will not function primarily as a mosque; New York City is already home to more than 200 mosques. Instead it is modeled on other religiously based establishments like YMCAs and Jewish Community Centers.  The Islamic center will serve the larger community to become an institution for learning, collaborating, and sharing knowledge across faiths and cultures.

New York City Mayor Michael Bloomberg shares his concerns.  He backs the project and also states that “Government should never – never – be in the business of telling people how they should pray, or where they can pray.”

Many people in blogs, on the air and television have stated that a mosque at ground zero would serve as a sort of “trophy” to Muslims everywhere.” This thought process misses the point of a community center.  Muslims as a whole are as appalled by the actions of a few radicals.  They are Americans, They want to connect with their country and give back as well.  Undoubtedly people of the Muslim faith lost lives in the 9/11 attack as well.

A blog comment posted by someone identified as @mr9376 states: “Nobody’s got exclusive rights to Ground Zero? Wrong. We’ve got exclusive rights. The loved ones of the victims-nice to meet you. Our loved ones paid for those exclusive rights when they died. When all is said and done, it’s the victims’ families and friends who’re gonna have to live for the rest of their lives with the question I have to live with. Did… die quick or did she have to jump to avoid being burned alive? There is no answer to that question as there are no graves, just the Ground Zero site. It’s a cemetery, friends, and I hope you all have enough sense to respect that.”

Lest the impression is given that only right wingers are behind the blocking this statement came recently from the Anti-Defamation League : “building an Islamic Center in the shadow of the World Trade Center will cause some victims more pain – unnecessarily – and that is not right.”

But then we should not be surprised by seemingly nice religious folks taking sides.  We’ve seen a lot of it lately.  It has become a matter of course, our Gods all seem to be angry and all seem to be intolerant. Perhaps we do need to begin thinking in directions of behaving better than these ancestors of the Goode Book. (s)

Should the voices of Muslims who lost their lives in this attack be silenced simply because some fringe elements took it upon themselves to stage an act of terrorism?

There is a president for this mistreatment and we would do well to remember it.  During WWII thousands of Japanese Americans were interned in camps for the “safety” of our nation.  Their land was taken, their lives disrupted and it wasn’t until the 1989 when then President Bush issued a formal recognition along with apology from the United States Government. Do we really want to go there again?

It seems to me that an Islamic community center is exactly what is needed at this time.  Many Americans are still greatly misunderstanding the message and teachings of Islam one blog commenter posted the following:

“Do you know that Muslims are allowed to lie to infidels so they can spread the cause of Islam? It is a doctrine called Taqqiya and is to be spread in lands that do not have a Muslim majority like the USA.

Compare Muhammad and Jesus. One advised that you give the other cheek and even forgave his crucifiers. The other beheaded people and was a pedophile. Is there a religion more foolish than Islam?

Also wherever Islam has been victorious, it has decimated the most important religious sites of other religions. Cordoba? Do you know about the jizziya tax? That is what Christians and Jews had to pay for living in Cordoba as infidels. The Hindus had to do the same in India.

There may be moderate Muslims but there is no moderate Islam. Islam teaches hate about infidels. Instructs its followers to kill them. Of course there is violence in other religions but no other religion challenges Western values like Islam does. Freedom of speech, freedom of women, freedom of religion are all ‘haram’ under Islam. It is a hateful ideology. Please open your eyes before it is too late.” [@brian_geo]

This sort of antilocution reminds one of, well…every fear based propaganda that human kind has disseminated throughout history in order to sway weak minded people to their sides.

This argument has not been limited to the Tri-State area, as everyone knows the political glitz brought out former Governor of Alaska Sarah Palin who upped an already raucous debate when on Twitter she called on “peaceful” Muslims to “refudiate” the plan, calling it “a stab in the heart” for America.

“Ground Zero Mosque supporters: doesn’t it stab you in the heart, as it does ours throughout the heartland? Peaceful Muslims, pls refudiate,” Palin said via Twitter.

She subsequently deleted her “tweet” and published a new message, which did not include the made-up word “refudiate”: “Peaceful New Yorkers, pls refute the Ground Zero mosque plan if you believe catastrophic pain caused @ Twin Towers site is too raw, too real.”

What we need as a nation is to heal. We need to leave the political grandstanding behind for a moment and think about the realness of the people involved on both sides.  We really haven’t dealt with our feelings on a deeper and spiritual level.  Yes we have gone to war against the “bad guys” and yes we see rants galore regarding immigrants, supposed security risks and darker folks in general.  But we have not taken the opportunity to allow for those Americans who are Muslims to feel their pain.  Christian America seems to think they have a corner on Pain Avenue.  To disregard the feelings and sorrow of our Islamic brethren is to disenfranchise a portion of our own people.  And isn’t it disenfranchisement that causes such problems to begin with?

American citizens could take this opportunity to begin healing themselves and the land around ground zero by accepting the sacred nature of a mosque set up at the site.  A mosque is less about a trophy as some westerners seem to see the setting up of religious structures and more about a place to sanctify the spirit and the land together as one.

By: Grainne Rhuad- “Applying contemporary standards of tolerance to medieval Muslim history and policy does a disservice to the prospects of reconciliation in our times. The assumption by some that an inherent medieval Islamic intolerance prevailed and that it underlies present-day Muslim terrorism is a distortion of reality.”