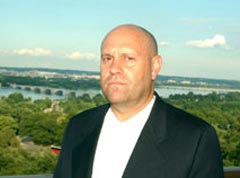 “Get out. Out! Ok, thanks, nice knowing you, I got work to do.” Mikey Weinstein is huddled over his computer in his den, typing feverishly as he orders us away. His girls scurry out of his office and I follow close behind. We mill around in the living room of the Weinstein house, which sits at the foot of the Sandia Mountains in Albuquerque, New Mexico.

A minute passes. “Hey come here guys! Come look at this one. These motherfuckers!”

I trot back in on command, eager to get a glimpse into the inner workings of the Military Religious Freedom Foundation. Mikey points at his screen. The latest email calls him a “Christian-hating, Muslim-loving, Jew bastard”. Not much different than a lot of the “criticism” that gets sent to the foundation.

“It’s no coincidence that most of these are the same”, Mikey comments. “These fundamentalist fuckers give the same talking points to all their people and they all just vomit them to me over email.” The message is rife with misspellings, poor grammar, and accusations of misuse of taxpayer dollars, despite the MRFF’s total funding through private donors. The facts never seem to constrain Weinstein’s critics.

Mikey chuckles, and then we all chuckle. And then a pause. “Ok you guys, really, that’s enough. Can’t you see I’m working here? Go on, get out, I’m busy”, Weinstein barks as he turns back to his computer screen.

While all this hate mail can be a great source of pleasure and amusement, we all know, even as we laugh, that it can’t be taken too lightly. Weinstein and his family have become accustomed to receiving death threats on a regular basis from “good Christians”. They’ve had their home vandalized on more than one occasion, prompting Weinstein to hire on security professionals. I got the chance to meet one of them– a very serious Marine veteran who volunteered out of respect for the job Weinstein does to protect soldiers from religious coercion within the ranks. I would not want to fuck with him.

This process of calling us in and out of the office gets repeated several more times as Weinstein stumbles onto other gems of fundamentalist buffoonery and ignorance so astounding he feels compelled to share them with us. These sinister emails are a constant for the Weinsteins, but they’re really rolling in on this day. That’s actually a good thing—it means the MRFF has struck a nerve with its most recent victory.

The Pentagon acquiesced to Weinstein’s foundation and decided to pull Franklin Graham from a National Day of Prayer appearance at the Pentagon. The MRFF took action after receiving complaints from Muslim military personnel in the Pentagon, who felt more than a little betrayed that a man who called Islam an “evil” and “false” religion had been given an official invitation by the Pentagon to speak in the heart of the DOD. An official invitation to this fundamentalist hate-monger was a direct slap in the face to America’s Muslims, but that didn’t seem to concern the Pentagon brass. It did concern Mikey Weinstein.

In a letter to Robert Gates, the MRFF asserted,

“Given the heinously hurtful, bigoted, and very public continual statements of Mr. Graham against the entirety of the religion of Islam, and his position as the honorary chairman of the NDPTF, the Military Religious Freedom Foundation hereby demands that the Pentagon Chaplains Office immediately rescind its invitation to Mr. Graham…”

The rest of the letter is worth reading, as it details the toxic relationship between the Pentagon Chaplain’s office and the National Day of Prayer Task Force (a private organization headed by the wife of Jim Dobson, a man I’ve written about previously).

As a former Air Force officer I was shocked to hear that such a man had been invited to the Pentagon. Graham, who has repeatedly and publicly referred to the whole of Islam as “false, “evil”, “wicked”, and “violent”, also had this to say:

What a kind and generous Christian Graham is, offering the world’s Muslims an ultimatum to embrace Jesus Christ, as an alternative to the apparently ‘Islamic’ practice of blowing themselves up.

Even in my limited positions of authority as a company grade officer, I would have never dreamed of abusing that authority over my troops by telling them one religion or another was false. I have strong personal feelings regarding religion, but I keep them to myself in the workplace. Officers have a special responsibility to maintain unit cohesion by respecting their troops, and not endorsing one particular world-view over another. Telling your troops their religion is “evil” is harmful to the mission. And it’s also a dickheaded thing to do. Calling in an outside speaker to do this dirty work strikes me as a particularly chickenshit way of trying to shirk command responsibility.

Someone in the Army must have realized this as well, because when Weinstein came out swinging they backed down almost immediately. Like the Jesus Rifle case the MRFF took on recently, this was a clear violation of the establishment clause of the First Amendment. Hell, even Bill O’Reilly could see that the Pentagon was out of bounds. In one of those fortunate coincidences that only seems to come by accident, this monumental victory for the Military Religious Freedom Foundation came just days before their annual Thomas Jefferson Awards were held.

The Thomas Jefferson awards are open to the public, and are intended to honor those who take up the job of protecting the United States Constitution by building the wall of separation between church and state. Through my friendship with his son, Curtis (his reason for starting the MRFF), I got to know Mikey Weinstein. I had the great pleasure of helping to prepare for the awards ceremony, and attending it (it says much about the humility of Weinstein, a man who has given much of his life to the MRFF, that he thanked me endlessly for my minor contributions to this event). The ceremony was opened by a very talented and beautiful singer/songwriter known simply as Celia, who was so inspired by the MRFF’s mission that she penned a song for the organization in one night. Thomas Jefferson honors went to journalist Jeff Sharlet, whose book, The Family, exposed a strange and cultish Christian organization operating at the very heart of power in Washington—for the last 70 years! I advise you to pick this book up, or at least watch one of Sharlet’s interviews on it– you will see the very serious danger that creeping, covert Christian fundamentalism poses to our democracy. Due to some last minute medical concerns, Sharlet wasn’t able to make the awards ceremony, so it was accepted on his behalf by Elizabeth Sholes, a self-described “kind of ‘social justice’ Christian that Glenn Beck warned you about.” As the Director of Public Policy for the California Council of Churches, she represents over 6 million California Christians.

Ed Asner, star of the recent Disney movie Up, also received honors. Call me ignorant, but I was completely unaware that Asner, in addition to being a talented thespian, is also an inspiring and articulate social activist. He warned of the dangers that religious extremism, in all its forms, poses to democracy. Particularly insightful was his warning of the “religion of Americanism”, which inspires a zealous citizenry to blindly support all actions of the US government, regardless of the cost to others. His warning echoes Orwell’s warnings on the dangers of nationalism.

The music was graceful, the speakers moving, the food delicious, the booze free-flowing, and the two hundred attendees were diverse and erudite. Good times were had by all, and the fifth annual Thomas Jefferson Awards were a smashing success.
It wasn’t until the next day that I found out a man milling around the outside of the awards ceremony with a gun had been arrested (my thanks to the Albuquerque Police Department). I was more than a little taken aback when Weinstein relayed this news to me, in his usual matter-of-fact way.

“Yeah some guy was hanging around outside with a gun, so they arrested him. We’re waiting to hear more from the FBI.”

His way of dealing with such news was not what I would call nonchalant— Weinstein cares deeply for the safety of his family and supporters. Rather, he acts with the cool and detached manner of a person who has grown used to dealing with danger. Security concerns are a part of daily life for Weinstein and others associated with the MRFF, who refuse to be deterred from their mission. Mikey Weinstein is a man possessed with a purpose that is greater than any one person. A man who is doggedly and fearlessly carrying out the oath he took to “support and defend the Constitution of the United States.” Like many other military personnel, I have looked on nervously as the wall of separation between church and state has been eroding within the military. I’ve seen commanders send emails to their troops coercing them to come to Officers Christian Fellowship meetings. As a cadet at the Air Force Academy I saw the administration endorse “The Passion of the Christ”, and I was not allowed to put “agnostic” on my first set of dog tags. The formation of the Military Religious Freedom Foundation was a welcome relief to myself, and the 17,500 other military personnel who came to them for help.

Some Christian military personnel scoff at Weinstein’s efforts. They think he is simply waging a one man war on Christianity, not knowing that 96% of Weinstein’s clients have been Christians (just not the “right kind” of Christian). Failing that, others feel his methods are too bold, his dialogue too brash, his manner too impolite. That’s fine. They can rest well knowing that if they are ever the subject of discrimination for their beliefs (or non-beliefs), and their chain of command fails them, Weinstein will jump to their aid like an attack dog, foaming at the mouth. He will fight, and he will bite, and he will not let go until his client receives justice.

People the world over owe a deep debt of gratitude to civil rights fighters like Mikey Weinstein. Men and women who have such an acute sense of justice that they simply cannot stand by while the little people get trampled— instead, as if by reflex, they will drain their bank accounts and brave daily threats to be a voice for the voiceless. 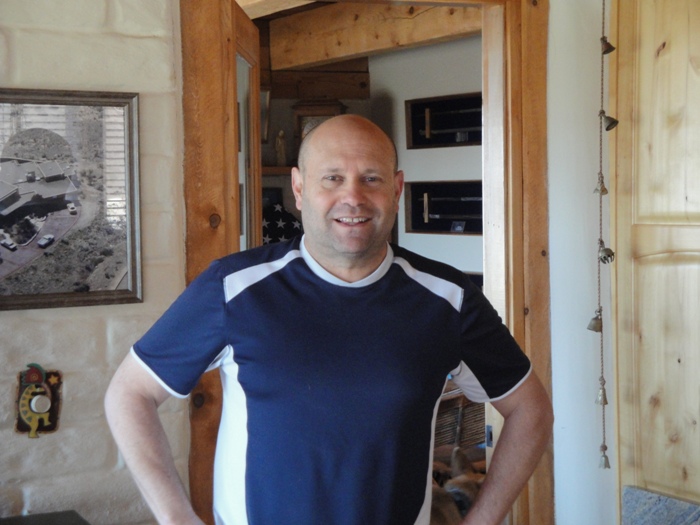 Chris
“I left the Air Force at the end of five years of service after graduating from the US Air Force Academy. I now spend my time doing my favorite things: travelling, writing, playing rugby and soccer, meeting new people, and helping a few of the many who need it.”

By: Chris- Officers have a special responsibility to maintain unit cohesion by respecting their troops, and not endorsing one particular world-view over another

Anti-smoking lobbyist: What a bunch of Ash-holes

Argentina; A Beacon from the South