Argentina; A Beacon from the South 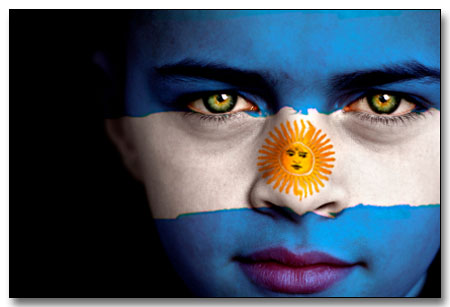 Argentina!  The President of Argentina made a campaign promise.  She promised that the Civil Rights of gay and lesbian persons living in her country would be brought into line with the heterosexual majority.  She promised, should she be elected, this would be a priority.

Earlier this week, the news from Buenos Aries brought word that historic legislation was passed and Argentina, Roman Catholic Argentina, became the first Latin American country to legalize same-sex marriage. In so doing, the Argentinean legislature conferred upon its homosexual minority all of the rights and responsibilities enjoyed by the heterosexual majority.

President Cristina Fernandez did not have an easy road to the passage of this legislation. There were barriers that needed to be overcome, including the opposition of members of her own coalition. The Roman Catholic church, the Fundamentalist Evangelical branches of Christianity and the Conservative politicians were vociferous in their opposition to granting same sex couples the right to marry, There were alternate proposals for “Civil Unions” that would have prevented same-sex couples from adopting children and also would have kept Lesbians from legally undergoing in vitro fertilization as a means toward conception. President Fernandez’s government rejected these, and went with a law that would be in accord with the promises made during her campaign for office.

The President of Argentina took on the challenge and went with it. Her political courage resulted in a law that makes Argentina a shining example of how to actualize the promises made during political campaigns. Argentina stands alone in South America, and joins Canada as the only Countries in the Americas that have seen fit to make ALL citizens equal under the law.

During the last political campaign here at home, several promises were made to the GLBTI community. Among those promises were an end to the odious “Don’t Ask, Don’t Tell,” and the repeal of the equally despicable, so-called “Defense of Marriage Act.” Both of these promises have yet to be kept. President Obama and his government appear to be well-intentioned, but there seems to be a shortage of real courage.

Even the measurement of progress toward fulfillment of these promises is dependent on how “progress” might be defined. The flushing of “Don’t Ask, Don’t Tell” into the toilet bowl reserved for bad legislation is being held up while a questionnaire is devised, sent-out to military families, returned and the results compiled and dissected. The questionnaire is at worst, many say, homophobic in its content. At its best it is a delaying tactic. The fact is, the whole concept of a questionnaire sent to what is basically a heterosexual majority with its own innate biases, is an example of unfair and unnecessary foot-dragging on the part of the military and the government. We have before us the examples of the many countries that have done away with any law that prevented gay men and lesbians from serving openly in their military. All we need do is look at Canada, the United Kingdom, Israel and many other countries to see that such integration can and should be seamless.

The Defense of Marriage Act, or “D.O.M.A.” has not begun to be addressed and the process for repeal is still only a device for hollow rhetoric. Any move toward real action does not seem to have begun. It would seem that except in occasional political speeches before the right audience, this promise to the GLBTI Community has been forgotten. It is true that there is vocal opposition from the Christian Fundamentalist Churches, from the Roman Catholic hierarchy and from the Conservative, right wing branch of the Republican Party. Tea Baggers (don’t you love that name?) also are vocal in their opposition. Such opposing voices must not be allowed to intimidate and carry the day.

The question is, what is the real threat? Is the threat to the Obama Presidency and the Democratic Party any stronger than what has been experienced in other countries that have had the courage to overcome the opposition that presented itself and move forward with the conviction that for all citizens equality must prevail, and discrimination, especially discrimination that has been enshrined into the laws of the land must end.

Time alone will tell whether any of the promises made to the GLBTI Community will be kept. Time alone will tell whether President Obama has the courage and the political acumen to keep his campaign promises, and to guide these United States into that place where the guarantees of our Constitution can be fulfilled for all its citizens and not just for those moneyed few who shout with the loudest voices against the progress that will truly be just.

By: The David- By legalizing same-sex marriage, the Argentinean legislature conferred upon its homosexual minority all the rights and responsibilities enjoyed by the heterosexual majority.

The Best and the Brightest: Another Adventure with Mikey Weinstein