The Case of the Three Little Pigs 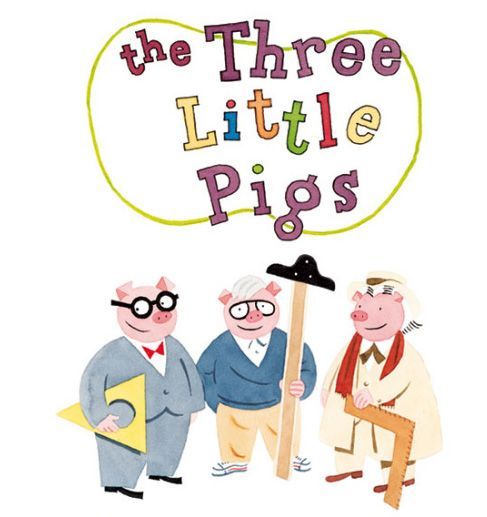 Good morning, your honour. Before I set out the case in my defense, I should like to introduce myself.

My name is B. B. Wolf. You may have heard of me referred to as Big Bad Wolf; but that, I assure you, is a canard, your honour. The initials stand for Brave Brother Wolf. I have my birth certificate to prove it.

What’s that, your honour? You’d like me to get on with it? Of course.

Your honour, these are the “facts” that the prosecution alleges: That I, in an act of wanton aggression, attacked the trio of delinquents known as the Three Little Pigs, destroyed their houses, and cruelly killed and consumed them. It’s a lie, your honour, and I shall prove it.

Your honour, these are the facts, which I would like to set before you:

There were these three little pigs, dirty little swine, who came to my forest. Here, your honour is the first exhibit: a photograph of the three pigs. You can see them: the first little pig, the second little pig, and the third little pig. See how evil they look, with those round noses and those obese little bellies. Look at their evil little eyes, your honour.

Now, your honour, these three little pigs turned up on my land, and began to build there; despite there clearly being a signboard prohibiting any such action. Here is a photo of that signboard, your honour: exhibit two. NO TRESPASSING – PRIVATE PROPERTY – VILATORS WILL BE EATEN. Please excuse the misspelling of “violators,” your honour. It was a blunder on the part of the stupid sign-painter I employed. Rest assured that he will make no such mistake, ever again.

Anyway, these three swine…excuse me; your honour…these three porcine gentlemen then proceeded to trespass on my property, and then added insult to injury. Here, your honour, is what they did: exhibit three is this photo showing the First Little Pig raiding one of my haystacks and stealing hay, which he then proceeded to make a hut with…completely without building permission, and on my land at that, your honour.

Then, here you have the next exhibit, a photograph of the Second Little Pig chopping down a plantation of valuable saplings, your honour: saplings which would have grown into mighty trees and reversed the usual trend of deforestation. Your honour, I choke to think of the woods that this…pig…destroyed in order to make himself a house of sticks. And on my land, too.

Then, another photograph. This makes exhibit number…number…uh. Anyway, it shows the Third Little Pig running an illegal brick kiln on my land! Can you imagine the environmental damage the grunting little piece of ambulatory bacon had perpetrated? And what about vicarious liability, your honour? Would I not have been held responsible had I not taken action?

So, your honour, these exhibits prove that, first, these three pigs were trespassing on my property despite warnings being clearly posted; second, that these three pigs were doing me material damage with their activities and, third, that I might have found myself in legal complications if I had not attempted to remove said pigs from my land.

So, what did I do your honour? The prosecution alleges that I went and blew down the houses of the first and second little pigs and gobbled them up. That is simply not true, your honour, and I can prove it.

First, your honour, I tried to persuade the First Little Pig to meet me for a face to face discussion. I went to his house and asked him clearly, “Little pig, little pig, let me in.” Instead of responding to this entirely civilized and honestly articulated desire for negotiations, the First Little Pig insulted me by refusing to let me in – and that, in the name of the hair on his chinnychinchin. I have no idea what a chinnychinchin is, your honour; certainly it is not a chin, for no pig ever possessed such an anatomical feature. I can only conjecture that it is a term for some obscene part of the porcine anatomy.

Then, the prosecution alleges I without provocation blew down the house of straw and gobbled down the pig. Here is a certificate from my family physician, attesting to the fact that I have been a lifelong sufferer from asthma. Can you imagine how much provocation it took for me to risk an attack in order to blow the hut down, especially with all the allergens floating around? I was indeed sorely provoked, your honour.

And after that, I should specify that I did not “gobble up” the First Little Pig alive and screaming, as the prosecution alleges. Raw meat isn’t safe, and raw pork is all too likely to contain tapeworm cysts. No, your honour, I very humanely slaughtered the First Little Pig and ate him roasted, with an apple in his mouth, and with coriander sprinkled over him. The recipe? You’ll get it.

Then, I decided that I should give the Second Little Pig the benefit of the doubt. Instead of launching eviction procedures, as I was surely entitled to do, I approached his door and asked him, very politely, to let me in. But instead of doing so, the wretched criminal proceeded to insult me in exactly the same terms as the First Little Pig.

I ate him, your honour, steamed with wild rice, with a dressing of olive oil and lemon sauce. I’d be very happy to give you the recipe too, your honour. Yes, directly after the trial. Of course.

Now, your honour, I am a fair wolf. I do not judge people by the actions of their peers. Therefore, even though the First and Second Little Pigs had so cruelly insulted me, I still chose to ask the Third Little Pig to talk to me. I wanted a modus vivendi with him. Your honour, I was prepared to negotiate his withdrawal from my land. But he, too, refused to open his door to me, and bombarded me with abuse.

Now, your honour, you understand that I could have taken drastic measures. After all, this was a criminal who had insulted me, who had refused to vacate my property, who had set up an illegal brick kiln and then built himself a brick house…all on my land, your honour. I could have dynamited his house; I could have starved him out. Did I do any of these things? No. I was still trying to reason with him. I wanted to talk to him face to face and persuade him of the wrongness of his position, your honour. Since he would not open his door to me, I tried my best to get inside to talk to him. At considerable risk to life and limb, I climbed on to the roof and went in through the chimney, so that I could sit down with him and talk to him calmly and reasonably. And what did I find?

Why, your honour, the evil little swine had actually built a fire in the hearth and was attempting to boil a big pot of water there, in an obvious attempt to kill me by scalding me alive! I barely escaped with my life, your honour, only because the water wasn’t yet hot. Can you imagine the depths of depravity in the heart of the murderous little beast?

Therefore, obviously, I was only acting in self-defense when I thrust him into the pot and boiled him alive, your honour. I’m sure you see that, don’t you? And he wasn’t even tasty boiled like that. I’m not even sure I managed to destroy any tapeworms he was carrying. I’ve put my life and health on the line, your honour, and still the prosecution alleges I’m the villain.

Not guilty, your honour? Why, what a pleasant surprise. Thank you so much. Will you come for dinner tonight to my farmhouse?

The menu? Why, the finest pork dishes of course.

By: Bill the Butcher- My name is B.B.Wolf; that stands for Brave Brother Wolf.

The 10 Most Likely Ways You Will Die