Those Who Speak For God 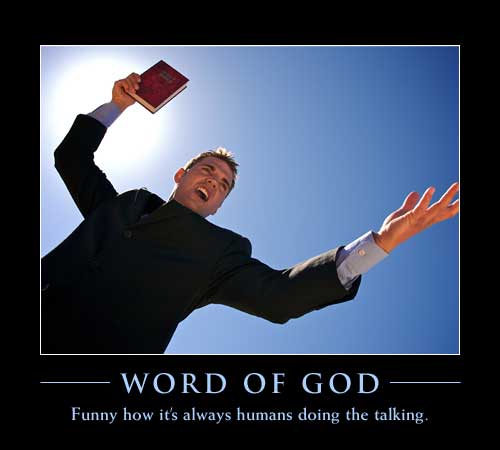 It’s risky business to me to leave the New York City area, which a colleague of mine did this past week. Out there in America they’ve gone loopy over God. The political right has usurped more than the Republican Party; they have God in their clutches, claiming His sponsorship in their Tea Bag journey. Stories about protestors suggest that many in the U.S. are furious, in revolt against government and all incumbents. It appears that God is the one constant in their politically partisan crusade.

The Tea Baggers insist that they are not racists, but their anti-Obama thumping can only be explained by their collective paranoia of a Black man in the White House. They don’t even recognize their racial fears for it’s so solidly entrenched in their psyches, so they justify their well veiled racial priorities with that familiar cry of God as their leader, the head of their ticket.

My colleague brought me back a newspaper this week from the Southland, a county edition of a free weekly called The Good News. The page one headline screamed, “Taxed Enough? The Journey of America’s Tea Party.” The article described the Tea Baggers as America’s most vibrant political force. Naturally I turned to the editorial page to gain an insight on who was behind this sheet, and there it was, a box listed the people responsible for the publication – and at top it states “Editor-in-Chief: God, Our Father.” Makes it sort of tough to argue with a publication and their political slant when God is the editor. I’m tempted to suggest that God is the blog manager here, hoping it might help to get new readers to this page; a dollar for this commentary is a dollar for God. Sounds good to me.

The newspaper, The Good News, is a member of the Evangelical Press Association, self described as a Christian community newspaper showing what Christ is doing in the world. Most of the articles were political with a strong right wing leaning, and their editor God was always in evidence. That old axiom “God is everywhere” is certainly true.

Then there’s The Jewish Voice, an ultra conservative monthly out of New Jersey. Their May issue boasts a lead story with a headline, “Jewish Americans for Sarah Palin.” The anti-Obama, that’s the headline. The article reports that they celebrated Israel Independence Day by launching a website “Jews for Sarah.” That’s how they celebrated Israel Independence. They’re linking Israel Independence with Sarah’s political aspirations. They call themselves “The Kosher Tea Party.” Published in the United States of America, it’s an anti-American magazine, and features a series of ferociously anti-Obama ads in every issue, which strikes me as anti-American since he’s our elected leader. I keep wondering why it’s acceptable to be critical of U.S. policy and leadership, but any criticism of Israel’s Knesset prompts cries of anti-Semitism. If you’re anti-incumbent it shouldn’t stop at the Israel border.

In Pompano Beach, Florida, recently, a Muslim clerics’ prayer at the outset of a commission meeting at City Hall, provoked uproar. Critics faulted officials for allowing a prayer in a foreign language whose “religion and culture differ from priorities of other faiths.” The English translation of the Imam’s invocation sounded startlingly familiar to me when I read it. He called on “God in this hour. We are humbling asking God for your guidance.” Apparently religion to some is acceptable only in English, which would mean that the original text of the Bible would be unacceptable, even subversive. By the way, at that same City Hall on that day a group of hand holders gathered to celebrate National Day of Prayer. It took a strong conservative columnist, Cal Thomas, to put it in his proper perspective. He recently wrote, “Many Christian leaders spend more time bashing than they do praying,” and he quotes Jesus, who apparently once said at a press conference, “Do not be like the hypocrites, for they love to pray in a synagogue and on the street corners to be seen. But when you pray go into your room and close the door and pray to your Father who is unseen.” Jesus took the words right out of my mouth.

Spiritual leaders have always been at the forefront of advocating social change. Gandhi and Martin Luther King, Jr., however, were not political partisans. Rather they were advocates for social justice and inclusion; which is a direct contrast to the current religious zeal which is politically partisan, impervious to social justice and exclusionary to the Nth Degree. I’ve never been enamored by organized religion, finding it often sanctimonious, judgmental, imperious, often gets in the way of my faith. I’m as curious as the next person about the mystery of creation, the autumn leaves, and the ocean’s tides. A powerful force beyond my comprehension; some undefined unknown, which many have chosen to call God.

But I haven’t seen a single clue that would suggest this enigma was supporting Ron Paul’s little boy in his pursuit of a Senate seat in Kentucky. God has been reduced to being a useful political tool stripped of any mystery that inspires on one hand and creates serenity on the other. How to rise above this religious crusade, this enormous sham that has all the spiritual authenticity of a cross burning without the sheets.

I’d like to call on you right now to join me in prayer, since prayer has become the new national sport; I’m praying that the Yankees and Mets win today, that this blog site remains open for business, and that some bucks are found to bring life back to St. Vincent’s Hospital in New York. And I think I can make the argument that God likes incumbents, government regulation of banks, coal mining, and oil digging. I think it’s so, because I said so. Amen and Hallelujah!

I’m Troy J., out on an ecclesiastical limb.

By: Troy J.-Apparently religion to some is acceptable only in English, which would mean that the original text of the Bible would be unacceptable, even subversive.

The Nature of Freedom