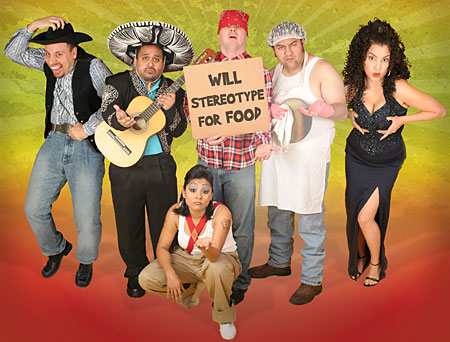 Very recently I was reading the local newspaper and saw the Florida County in which I live was being referred to as “the reddest county in the United States.” This, of course, was a reference to the very Conservative politics of those living here. Many of those living here are so Republican they make Dick Cheney seem like a pinko Commie tool. This area is also known for the deeply Fundamentalist bent their version of Christianity has taken. The area is densely populated with Fundamentalist and Evangelical Christian Churches.

Still, last week, after the Post Office drive for non-perishable food items, several people were front and center on the local news red faced and livid, declaiming the food drive and swearing that they will never give to that drive again after what was done with a portion of the food. And what, you might ask, was the sin committed by those who administered the Drive? It’s quite simple really. It seems a portion of the food-stuffs went to a local social service group that administers to the poor without checking for citizenship. It seems that this group has given food to people who had none, even if these people did not hold a green card. I am sorry to say that they might have given some food to hungry people who are, in the vernacular of the day, “illegals…”

I guess when Christ admonished his followers to feed the hungry he had a hidden meaning, or there were words that didn’t get transcribed. I think what Christ meant to say was “Feed the hungry as long as they have their papers making them legal residents, and should they not have those papers… let them and their children starve.” Yes, I am sure that is what he meant to say.

This is the second time in recent weeks that I have become angry and dismayed at what I hear. I had this same feeling when some of the same people fought the recent Health Care Legislation, and the reason I heard was that health care would then be available to these “illegals.” Oh my… can you believe for a moment that MY MONEY WILL BE USED TO PROVIDE MEDICAL CARE FOR THESE AWFUL PEOPLE WHO HAVE INVADED OUR COUNTRY?” Well, I have news for those who have that fear. The provision of emergency health care paid for by the state has long been in place for those who seek care in our hospital emergency rooms. The alternative would be to let them die in the gutter outside of the hospitals. I would ask everyone in favor of that alternative to raise their hands, and to show up with their shovels so we can bury them and their children. What is wrong with this society? When have we become so selfish that we cannot see the contradiction between what we profess to believe, and how we behave?

Immigrants. Illegals. We, a nation of immigrants have vilified both of these words and made them these people objects of fear and for some of loathing. Whenever a group is held up to ridicule and made scapegoat for situations in society over which they have no control it can lead to violence being perpetrated against its members, and witch hunts perpetrated against those who might have a kind word for them.

During the Second World War, we saw what happened top Japanese Americans, then, after the war the demagogue who was Senator Joseph McCarthy painted anyone whom he disliked and anyone who disagreed with him as a “Red” and in so doing he ruined careers, families, caused suicides and left untold damage in his wake. When he was finally subdued, the Communist Menace was still the monster and it was to fight this monster that the Ultra Right Wing and the Fundamentalist Religions raised their monies. “Fight the Menace.” The problem is, when Communism fell, a new monster was needed to keep the cash flowing in.

That new monster came to The Jerry Falwells, the Pat Robertson’s, The Family Research Council and the conservative branch of the Republican Party in the guise of the gay and lesbian population that seemed to be alive and well in most regions of the country. The plea from the money grabbers still resounds with “Send us your money so we can stop these queers from coming in and stealing your children and seducing them into their lives of depravity. We all know they cannot reproduce their kind, so how else will they grow?” People fell for that one hook, line and sinker, and so screaming about the gays among us became the cash cow for these groups.

Now gay people have been joined by immigrants and “illegals.” The thing is, all the arguments used to justify the enmity against this new group are just as full of holes as those used against any group that came before them: They are causing the crime rate to increase. Studies have proven otherwise; They are taking jobs away from good Americans. How many “good” Americans are in line for the lowest paying food industry jobs or for the lowest paying menial labor out there? How many “good” Americans are looking for less than minimum wages to work in the home of a wealthy person and live with the fear of discovery, or of being reported if they step out of line? How many? This scapegoated group also has to worry about losing their children, as there is a drive among “good” Americans to separate children who are citizens from their parents who are not. There is also a drive from another group to revoke the citizenship of children who legally hold it so that they can be sent to where? Anywhere but here. Where is compassion and where is the justice?

Whenever I see a new group being scapegoated, I look to see what is behind it. Groups are blamed for economic woes when they have no power at all to alter such circumstances either way. They are blamed for catastrophic political events. Gay men and Lesbians as well as Feminists were blamed for the awful events of 9/11 by “religious leaders,” and gay men and lesbians have been blamed for tornados and hurricanes. Now, I know this isn’t true, because I am a gay man, and please excuse me but I know I do not have such power. This does show, however, how very ridiculous the thinking becomes when we use any group for our own political, financial or religious purposes.

By: The David-Scapegoating is fast becoming the nation’s favored pass-time.

Those Who Speak For God