For The Love of Buskers 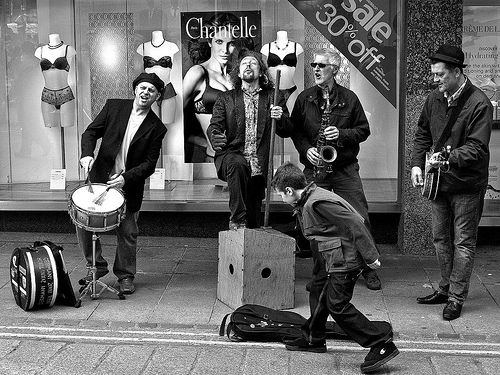 Most Saturdays you will find me at our local farmer’s market.  I love the sights, the smells, the people who come out, wrapped up in winter, on bikes in spring and summer, in order to get their vegetables and crafts.  It’s fun to run into old friends and get caught up which invariably happens. Behind it all is the lovely sounds; student violinists as well as accomplished fiddlers, choral groups, banjos, guitars and drummers, we even have a permanent market band that plays the didgeridoo mixed with space age tempos.   The Buskers or Street Musicians are an integral part of this experience.  They are the soundtrack that accompanies all these delights, that is if you are not plugged in at the moment to your favorite ITunes.  Don’t get me wrong I love MP3 technology and would use it too, but not here; not where there is LIVE music all around.

On a recent Saturday I had an experience that I have been thinking about.  My Shopping companion and I were leaving and I asked for the change which came to a couple of dollars to give to the banjo player who was the only Busker there that day.  He is often there and is a good player.  My companion did not want to give up their “hard earned money” to a bum.  What?

“This is not a bum, he is working with his skill, and quite well” I answered.

“He should get a real job.” was my companion’s answer.

Long story short, I got the money, a pleasant thank you riff from the Busker and my companion got a dirty look.  Now I was confused, just a week earlier I had watched this person praise the street mariachis in Mexico who went from restaurant to bar, trying to find a place to play.  This person pointed out that they were hard workers and willing to do what Americans are not, which is to spend their day doing whatever they know how to make money.  This companion of mine even paid a lovely old man $5.00 to play a song which was sweet and I’m sure much appreciated but not particularly good.

Here is what I don’t understand, what is it that makes it honorable in Mexico and dishonorable in America?  Is it because you cannot ignore the poverty as easily there?  Is it because the Buskers here look more like us and for some reason strike a chord?  (No pun intended)  My hypothesis is that somewhere in some of us, we are unhappy with the way our society has progressed, and we resent those who step outside of it and are content to sing for their supper.  “Where do they get off taking money from hard working people?” seems to be the reigning thought.

Buskers are hard working people. They are not expecting a hand out they are giving us something free, and ask only that we appreciate them as we seem appropriate. This seems to me a good bargain.  I would much rather pay a Busker who had played well than be forced into all those obligatory tips that we get tacked on to our bills at service establishments when maybe the service sucked.

Maybe we forget that Busking is an anciently honorable tradition.  The best seat at the fire and the best food would be given to travelling troubadours and storytellers.  They were the historians, actors, entertainers, messengers and babysitters all rolled up in one.  Before we had means of electronic entertainment, this is how the world got its news.  This is still how some of the world gets its news.

Benjamin Franklin was a Busker of sorts. He composed songs and poetry about the political situation of his era and performed them in public. He would also sell printed copies of his work. His father discouraged busking by convincing him that the stigmas some people attach to busking were not worth it. This experience helped Benjamin Franklin form his belief in free speech and is documented in his journals.

Also think where we would be musically without busking.  Struggling musicians would not have a way to make ends meet while they waited for their next gig. It is also the place where many established artists hone new material.  Would it be shocking to find that even today well known recording artists hit the streets to test their newest music, or more often to play just for the love of it?  Something about the music industry takes a lot of the fun out of music.  For this reason if you keep your eyes peeled now and again you will find the famous to semi-famous artists on the street playing music just to remind themselves and the world why they love it. 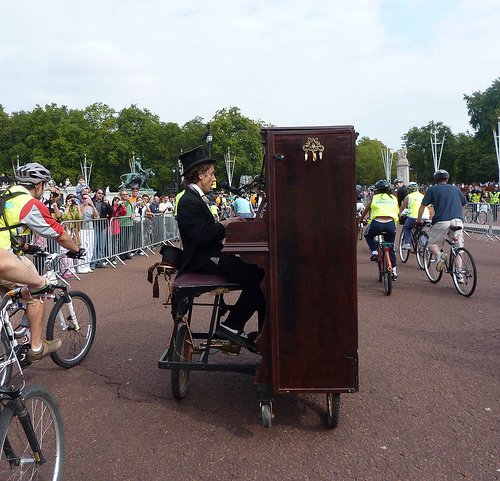 This trend is being noticed by many.  The HBO network has just begun a series called Treme based on the traditionally musical neighborhood destroyed by hurricane Katrina.  In it we get snapshots of musicians taking their music to the streets for all sorts of reasons from tourist dollars to traditional funerals.  At the heart of the Hollywood story however is the real life tale of generations of musicians in the New Orleans area who have made street performing their life’s work and love.

Buskers in America like everyone else are using the internet to organize and keep this years old tradition in place.  Sites like Buskerworld keep performers informed on areas to busk, etiquette, get- togethers, what’s happening with whom.  In many countries there are great Busker festivals, this too is kept up to date on such sites.   It is even legal in other countries and considered a legitimate form of taxable income, and maybe this will change soon here in the States where in most areas a permit is necessary, although thankfully overlooked some of the time.

Americans by and large seem to try not to notice our Buskers, but this is changing.  There is a new generation of musicians who actually prefer to take their music to the streets rather than be burdened by record company deals.  Recoding companies by the way are taking note and are coming to the streets looking for them.

From Classical to Punk Rock to Kazoo, if you enjoy it chances are there is a Busker somewhere playing it.  So if you haven’t paid notice to your local Buskers lately, please do.  Slow down, sip your beverage of choice, request a song and show your appreciation.  The world would be less musically diverse without them.