Greed Without Shame – Big Oil Vs. The Tax Man 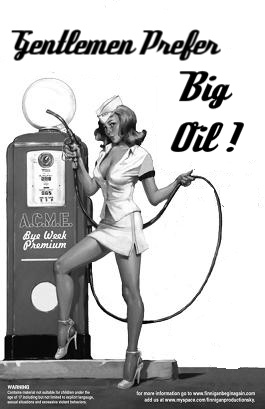 I sit here and I wonder why I was surprised or taken aback by the commercial I heard this morning.  I guess it was the audacity of it…… that any company or group of companies would have the nerve in these times when everyone with a conscience is vowing to do their part to lessen the suffering that the economic situation has brought about.  At first I couldn’t believe my ears, but, yes… there it was, loud and clear.  An association of oil producers was trying to rally the public to their side.  The argument they are using is almost beyond belief.

Their argument is quite simple.   They should not have to pay any increased taxes. These companies have just come off two years when their profits have smashed every record imaginable, these profits that were considered obscene by so many.  Under the oil-friendly Bush administration the petroleum companies enjoyed a climate where, in the eyes of the government, they could do no wrong.  They were under regulated and price increases were never questioned by the powers in Washington.  So the person who depended on oil for heat or for transportation found their pocket-books shaken and wrung dry to increase the wealth of the oil companies.  Now, as incredible as it might seem, these same companies are crying poor because the present Administration is going to attempt to even the terrain.

This commercial that I found to be so offensive featured a man and a woman using very modulated tones discussing all of the evils that will happen to the country if the oil companies have to pay any additional taxes.  The method used in these ads reminded me very much of the tone used by the Insurance Companies when the Clintons attempted to rein in the cost of Health Insurance.

There are other commercials being paid for by the Big Oil Billionaires and in their own way they are equally offensive but what struck me about the radio commercial was its absolute brazenness and the attempt to use scare tactics to get the very people they are gouging to rally to their support.

The commercial states that if taxes are increased for Big OIL Billionaire Companies they will not be able to afford to explore for new oil deposits.  Remember, these companies posted billions in income and unprecedented profits.

If taxes are increased for Big Oil it will result in persons losing their jobs and new jobs not being created.  This just points to the selfishness and lack of commitment by Big Oil. Remember, these companies posted billions in income and unprecedented profits.

If taxes are increased for Big Oil it will result in small business failures all over the United States.  This made me wonder if they are talking about the small independent service station owners who are being squeezed out by the Big Oil owned super service stations;  The next time we see a station closed, perhaps we can remember that the Big Oil companies posted billions in income and unprecedented profits.

If taxes are increased on Big Oil we will see State and local taxes lost as a result.  Are they saying they are worried about selling less of their product?  They profited from never before seen gasoline and oil prices and knew that they have a customer base that needs their products.  They didn’t worry about their sales then, and remember, Big Oil Companies posted billions in income and unprecedented profits.

We live in such very bad times; it seems to me that it is time for Big Oil to become a part of the solution rather than attempting to paint themselves as victims of taxation.

Their attempt is, to say the very least, unbelievably shameful.

The David-
It is past time that large corporations begin to pitch in. Too bad they didn’t get the memo.

The Rise in Fundamentalism