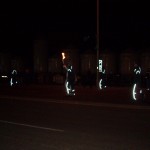 The projected time on the ceiling read 5:52 as my eyes snapped open; wildly brought upon by the sensation of being watched. The aroma of “Cocoa Rice Krispies” drifted lazily into my nostrils as I focused from the ugly red numbers above me to the small face a mere inch from my own as he leaned over from the side of the bed. Before I could croak out the loving words, “you had better be bleeding profusely” the face, worry lines etched around hopeful sugar dilated eyes asked, “Is it time yet?”

I rolled over and snuggled deeply into my pillow as a curt sign of dismissal.  One of the biggest complaints women have about men is that we are seemingly oblivious to subtly.  There would have been a time that I would have argued that this was the result of penile protective defensive actions against the assault of feminine social engineering, code named, “does this make my ass look big?” Due to my recent experiences however I would have to retract this theory and accept that this is a genetically manufactured feature in the male characteristic; further evidenced by the fact that the face did not retreat back into the darkness but multiplied three fold.  Thanks to a less than priggish past, the feeling of multiple breaths causing the hairs on my back to act similar to an ebb tide along the coast of a Costa Rican beach is not an alien sensation to me; the fact they were emanating from three boys from six to nine wearing “Kung-Fu Panda” pajamas rather than decidedly over eighteen year old  naked women with their names felt penned on their breasts for identification purposes later was. The ceiling mercilessly shone out 5:55 as second voice echoed the first’s query.

I once again replied in the negative with a firmer voice than the previous time, though because of the sound dynamics of my bedroom, it may have been construed as sobbing. It was Saturday, January 16th.  The Olympic Torch Run was coming through town that very morning.  Thanks to their teachers, who I suspect palled around with Caligula in one of their collective past lives, had made sure that the boys knew that this event was something that they should not miss, there were three boys expecting to watch this historical occasion.  Earlier on in the week I had agreed to see this desire realized.  It wouldn’t be until that Friday that I would discover that the torch would be coming through at 7:25 in the morning when even the sun had enough sense not to rise yet. But it was the Olympic Torch Run on its way through our little town to Vancouver and the glorious opening ceremonies that would apex with the lighting of the large Olympic torch cauldron on February 12th.

In a way I am offended by the Olympic Committee’s media representation of the torch run across Canada.  It is not really a run but like a tour of many of the towns and cities of this nation.  What this should have been called is “The Olympic drive to the outskirts of a town, get out, have a person run 200 yards with the torch before switching to someone else.  Then at the other side of town, jump in the RV to drive to the next town’s outskirts leaving the citizens to listen to an hour’s worth of local politicians patting themselves on the back for having the run come through their town”. I may be a might jaded but I believe that organizations when advertising an event should have full disclosure of what said event is in actuality. It’s like spending all night at the bar wooing a woman, exerting energy to convince her to go back to your place, purchasing $80 worth of off sales only to discover that in the transition from the glow of the 5 watt bar lights to the glaring 40 watt kitchen lights she has developed an Adam’s apple.  What are you supposed to do at that point?

Should you become an ungracious host because you failed to see the target of your lustful intent, who now sits at your kitchen table scratching at something that you have a sinking feeling is larger than yours, has contents that were not advertised succinctly enough on the outer packaging? There is the issue of off sales, one may be a lonely number but after the second mickey of rum, your clock shaped like a cat with its moving eyes becomes quite the impressive debater.

On the other hand, the “friends” that you were talking to about what they thought your chances were with said target, and who had rather large smiles on their faces when urging you to “go for it, stud”,  will opine for the next two years that you went for it whether or not you did or did not. There is also the consideration that the last time you bought off sales that asshole of a cat on the wall wouldn’t look you straight in the eye and that for the past several hours your underwear has been sticking uncomfortably to the front part of your body.  It is at this point your cerebellum, that has been frantically bilging out the dingy of consciousness to stay afloat in the raging ocean of alcohol while the squawking magpies of query constantly dive at its bald spot to peck small pieces of flesh from it, throws up its arms, screams, “Fuck it” and throws itself into the churning eddies surrounding the dingy.

You sit in your kitchen chair with no call to action, hoping that the sliding pressure against your calf is the dog humping your leg over your guest playing footsie with you.  This stagnation could potentially go on for hours…if it weren’t for the male back up brain located in a protected secondary area for such occasions when the primary brain becomes entrenched in silly notions such as rationalization. Unfortunately this fail-safe system is under the guidance of the hypothalamus which to this day still thinks that urinating on an electric fence sounded like a good idea when you were ten.  You feel a tap on your pelvic bone from the secondary brain that politely asks if the cerebellum’s comment of “fuck it” was an affirmation of action or a stand down request. You calmly respond that you can’t answer that for it is not your department to which begins a twenty minute conversation with your groin on the hierarchy of the male anatomy.  When a decision is made it becomes moot as in the time that you sat there with your head looking down, yelling at your crotch, your guest quietly sidled from the kitchen and out the front door. But I digress.

The Canadian Olympic committee deserve credit for their efforts on this torch relay trek across Canada – they could have planned a run that would have made a linear path coast to coast but they took it upon themselves to ensure that this event was a Canadian experience. The torch relay started on October 30th, making its 105 day jaunt around Canada the longest relay of the torch in Olympic history. The torch’s journey across the nation first made its way up to the northern territories and it has continued to jut across each province in order to ‘hit’ as many communities as it can on its way back to Vancouver allowing as many Canadians to feel a part of the Olympic experience. For months it has been impossible to watch the evening news without at least three times a week seeing children and adults alike gushing about the thrill of being witness to the Olympic Torch relay.  The boys were not the only ones excited about the torch coming to town; the town had decided that rather than make the torch an event it would make the day an occasion.  From the free pancake breakfast after the relay had departed to free swimming at the indoor pool to skiing at our modest hill to the theatre showing “Cool Runnings” the day was about community. The 16th was to our town’s turn to be part of that experience.

We arrived at our chosen viewing site, the edge of town, in the darkness of 7:20. Only a few people were scattered on either side of main street though a quick look down a couple of blocks down I could see that there was a throng of people lining the street closer to where the politicians would be waiting to hook themselves up with some positive PR associated with the Olympics. We had lucked out, the weather had been mild for the middle of January and it had continued that morning with a balmy minus 5- cold enough to keep the ice solid but warm enough that one did not have to worry about any mucus icicles.

At exactly 7:25 from the overpass came the first in the procession of the Olympic Torch Relay; the “Coca Cola” van, lit up with the Olympic Rings, pounding out from its speakers a rock n roll beat and an overly happy sounding DJ announcing the torch’s arrival in town followed by less lit Royal Bank van.  We watched as a woman stepped out of a RV with the torch and began her jog towards the center of town. By 7:27 all that we could see of the relay were the back lights of the police car.

It was not something that I would consider memorable; but then again I am not one for sports that I am not engaged in but this wasn’t for me, it was for the kids.   The kids, one of whom had found that rearranging the loose rocks in the mound of ice while the other two were facing the opposite direction of the road looking where a fire truck had been testing its lights as an escort the relay caravan to the next town.  I had to know what they thought of the relay, had it been what they had hoped it would be?

The eight year old boy looked at me, his eyes agleam, and answered, “Cool!”

With that simple one word response a sense of renewed faith in the purity of a child’s enthusiastic amazement being able to infect an adult cascaded down up me. Perhaps I do place too much emphasis on the little things that stall the unfettered intake of the joy that surrounds me; maybe I should simply accept some things as they are, to revel in that moment – perhaps I should stop being such an adult.  I have no doubt that the emotional revelation I was showering myself that morning I would still be lounging in this very day…but my young guru of simple glee, instead of leaving his pronouncement as a singular entity, chose to heed the warning that one is a lonely number, added, “I didn’t know MacDonald’s was open for breakfast – can we go there?” Sometimes the most vivid Olympic memories are not the ones manufactured to be so….

By Neonorth — The projected time on the ceiling read 5:52 as my eyes snapped open; wildly brought upon by the sensation of being watched.

New Girl in Town from the True Stories of Trapper Jim