Live from Argentina: Sarah Palin is no Evita! 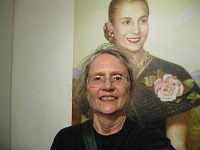 Live from Argentina: Sarah Palin is no Evita!
By Jane Stillwater http://jpstillwater.blogspot.com

“Do you have any Evita T-shirts?” I recently asked a docent at Buenos Aires’ Evita museum.  I wanted a T-shirt with a picture of Evita Peron on the front.  Is that too much to ask for?  Apparently so.

Here in Argentina, Evita is either worshiped as a saint or vilified as the devil incarnate.  In either case, no one here wants to wear her image on a T-shirt.  Rats.

Even finding the Evita museum was a whole bunch of work and involved at least two subway transfers and a whole bunch of “Donde esta….”  It’s located out in the Palermo district, sort of like the Beverly Hills of Buenos Aires — and there’s a reason for that too, which I will explain later.

I suppose in some ways you could think of Evita Peron as Argentina’s Sarah Palin.  After all, our Evita did have a passion for designer clothes.  Plus both Sarah and Evita cherished the limelight.  But the similarities between Evita and Sarah stop there.

Back in the 1950s, before it was even stylish and WAY before grassroots bloggers like myself took up the cause of America’s economic underdogs, Evita Peron seemed to be obsessed with offering help to the poverty-stricken underclasses of Argentina — and her main goal in life appeared to be to narrow the huge gap between the very rich in Argentina and the very poor.  Sarah Palin’s life goal, however, appears only to try to make herself wealthy too — while using America’s discontented poor as a stepladder, climbing up to the top on their backs.

I think it is fair to say that Evita Peron changed Argentina forever — from a feudal society of barrios, peasants and overlords to a much more economically democratic mix.  And the few rich people who controlled Argentina at that time hated her.  But do rich people today hate Sarah Palin?  I think not. 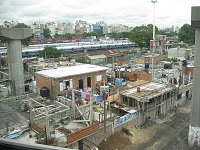 In America today, like in 1950s Argentina, the goals of the rich seem to be to create cheap labor and to use government money for themselves.  And the rich in America appear to be achieving these two goals easily — by dividing us lower and working class types into two different camps and then encouraging us go at each others’ throats so that we won’t be noticing so much as our wealthiest 1% clean out the till.

And with regard to splitting America’s lower and working classes into two warring factions, Sarah Palin has been a really big help.

I myself find Palin to be rather tedious and a media-hog.  On the other hand, however, I find Evita Peron to be endlessly fascinating.  Evita walked the walk.  She built orphanages, schools and hospitals for the poor, supported labor unions, championed healthcare, etc.  And when she died, the line of people who came to pay respects at her coffin stretched out for 35 blocks in the rain during the two long weeks before her body was finally taken off display.  Eat your heart out, Sarah!

While in Buenos Aires, I also had the good fortune to visit Evita’s tomb —   They buried her in the rich people’s cemetery, apparently as a final insult to her love of the common man.  But this move by the elite has backfired and there are still flowers being left on Evita’s tomb by her “shirtless ones” — and by all of us tourists as well.

Recently I was lucky enough to run into Dawn Makinson, a Canadian journalist covering her newspaper’s South American desk.  “Got any hot Evita Peron stories for me?” I asked her.

“I do.”  Then she told me about the time that Evita went out and talked to supplicants outside the Casa Rosa, Argentina’s “Pink House”.

“According to one of her drivers, Evita loved to curse.  And when she saw a woman in tears standing outside the Pink House, she said, ‘What the blankety-blank are you crying about?’  And the tearful woman replied that a bank had just foreclosed on her home.  So Evita stuffed the woman into the presidential limo and drove her off to the bank, whereupon Evita then cursed the bank manager out and saved the woman’s home.”

Can you even imagine anyone in the Bush-Obama administration — or even Sarah Palin — cursing out a banker?  No.

“But what about the orphanages that Evita founded?” I asked.  “Were they real or just for show?”

“No, actually I happen to know a surgeon who grew up in one.  According to him, that orphanage saved his life.”

Meanwhile, back at the Evita museum:  Apparently it used to be a home for poor widows at one time, and the wealthy had been really pissed off to wake up one morning and find “los pobres” living right down the block. 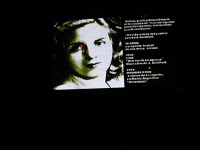 I loved the Evita museum.  It not only displayed many of her dreamy 1950s outfits but also several film clips from her old movies.  She was the Lana Turner of Argentina.  The museum was well worth the trip.

So.  We’ve explored the Evita myth and we’ve visited her tomb and her museum, which is still going strong even though Evita herself died back in 1953 or something.  Do you think that we will be having such a popular Sarah Palin museum in the year 2066 also?  Probably not.  And here’s even better news.  I actually finally found an Evita T-shirt!

Che Guevara also comes from Argentina.  And, like Evita, he devoted his entire life to trying to eliminate misery and degradation among South America’s poor.  And guess what?  Our Sarah Palin is no Che Guevara either!

Becoming America’s Che Guevara and fighting for the rights of America’s downtrodden is apparently not what Palin had in mind when she declared that she was “Going Rogue”.  While we are still on the subject of various famous “going rogue” legends in South America who have spoken out for the Common Man, let me remind you that Sarah Palin is no Salvadore Allende either.

When I was in Chile, someone there told me that Allende had first been a doctor who had been forced to complete his internship by doing autopsies.  “He performed over 1,000 of them — on people who had died from poverty, violence and abuse.  And after this horrifying experience, he decided to become a politician so that he could improve the situation of poor people in Chile.  And once elected president, Allende supported the lower and working classes and said that he wanted to make education affordable and make people healthy — and that he would put an end to economic speculation.”  And the rest is history.  The CIA hated it when he did that.  So they nailed him.

Palin will never have to worry about that happening to her!

Please sign my petition to stop Congressional lobbyists from owning our country:

It’s time for lobbyists to stop owning our government.

We can do this!
http://www.thepetitionsite.com/2/constitutional-amendment-to-stop-lobbyists
_______

According to the wisdom of world traveler, Jane Stillwater, the only resemblance between Sarah Palin and Evita is their fondness for fashionable clothing.

Katmai Bears: the Pinup Stars of the Cook Inlet