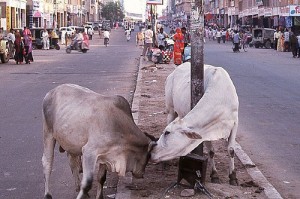 It’s one of the commonest sights on Indian streets, so much that it’s a staple in caricatures of street scenes: a cow, usually chewing the cud, standing in the middle of traffic or on the pavement, people and cars respectfully giving the animal a wide berth. It’s well-known that the cow is a holy and worshipped animal in India; so well-known, in fact, that one would hardly choose to wonder why.

In fact, remarkably few Indians even choose to think about why – in a nation of over a billion people, with one of the worst standards of living in the world, and with one of every two children suffering from malnutrition, for instance – millions of cows can be allowed to wander the streets, eating what they will, dropping their dung on pavement and street with complete impartiality, and aggressively attacking people who get too close. I can vouch for the latter myself, having been repeatedly attacked and twice injured, once potentially lethally, by cattle on the streets.

One must point out that these animals aren’t valuable milk or breeding animals in any sense of the term. They are, without exception, mongrels with various degrees of Zebu blood (the Zebu is the humped bovine of South Asia and Africa, usually fairly disease resistant but of exceptionally poor dairy ability), and almost all are well past their peak in terms of either milk production or breeding ability. In fact, in their younger days they were probably kept as dairy stock and then pushed out on the streets when past their productive years; this is why there are virtually no young street cattle.

These cows don’t live happily, you understand. They may be “holy” and “sacred”, and once in a while superstitious people might feed them a lettuce or a handful of hay and imagine that they’re booking a ticket to heaven by that act, but by and large they subsist by raiding garbage dumps and patches of scrubby grass. They are chronically starving, riddled by disease and parasites, frequently so thin that they are little more than ambulatory bags of skin and bone, hoof and horn, and few survive more than a year or two.

So – the question arises – why are these animals suffered to live? Why are they allowed to go on polluting the cities and killing and injuring people, when they could so easily be converted into beef to feed the starving millions? Isn’t it a crime to deprive these poor and underfed people of this plentifully available food? Isn’t it a crime to deprive city-dwellers of the right to cow-free, clean, safe streets?

What, one might ask, is the “holiness” of these “holy cows” all about?

I’m fortunate to live in one of the few areas of India which is cow-free; all cattle in these parts are either confined to their owners’ respective dairy sheds or are hanging from butcher’s hooks. The reason is that this is one of the parts of India with a predominantly non-Hindu, and therefore cow-eating, population. It’s kept the stray cattle off the streets (they’d be converted into steaks otherwise), and it’s also provided me with a reasonably objective view of the “holy cow” phenomenon.

Besides, I might as well record my bias: I detest cows. Cows are the one animal, apart from humans, whose extinction I would positively cheer. I hated them since before I was attacked and hurt by them; that merely cemented my dislike. And I eat beef, not because I like it particularly, but for revenge.

To get back to the point: ask an average Hindu precisely why he worships cows, and he’s liable to blink in confusion. It’s one of the things that are taken for granted, so much so that sometimes a cow’s miserable, starving, disease-ridden life on the streets is held to be more valuable than that of a human. The average Hindu calls a cow Go-mata, Mother Cow, and never stops to wonder why.

The fact is that once upon a time, about 2500 years BCE, Hindus ate cows. That was the time when the Aryans reached India from West-Central Asia. These Aryans, the proto-Hindus of the time, were pastoral nomads, and like pastoral nomads everywhere to this day they depended on their cattle to provide them everything from milk to drink and dung to convert into fuel to leather for their tents and clothing and sinew for their bowstrings to – you guessed it – beef for their cooking pots. It’s quite certain that beef was eaten by the proto-Hindus of India; it was, in fact, the best dish one could serve an honored guest.

Then something happened. At some point, a decision was taken to settle down in one place and farm for a living instead of wandering around. Farming (to this day, in the absence of mechanization) requires draught animals for plowing and drawing carts. An increasing population also needed more food. This food could either come predominantly from meat raising – or from raising grain. It could not come from both.

Northern India was, and still is, relatively arid and provides poor grazing. It could only support a limited cattle population. The proto-Hindus had a choice; they could either raise those cows to be turned into sizzling, succulent steaks, or they could raise them to provide milk and pull ploughs. They couldn’t, they decided, do both.

So a consensus was reached, probably over a span of some hundred years; the cow became – from a useful animal which could be butchered when required – something to be treasured and protected. Because it was obvious that, especially in times of scarcity, the temptation to eat the creatures (so freely available right to hand) would be overwhelming, the strongest taboos were imposed on the society of the time. The cow was equated with the mother. The bull was associated with one of the three main deities of the Hindu religion, Shiva. Eating cow flesh was equated with cannibalism. Even the castes which skinned the dead cattle and turned the skin into leather were shunned by society…even though they had no compunction about using that leather once it was tanned and ready for turning into shoes, bags or whatever.

Of course, it was possible to use the cattle to the end of their productive lives and then kill and eat them, and a logical society would have made that decision. But if one allowed the killing and eating of cows at all, how could one ensure that healthy, young animals weren’t eaten on the sly? One couldn’t. The only answer, if you were to ban cow eating at all, was to ban all cow eating, forever and ever, amen.

Therefore, it’s a misnomer to call the cow a “holy” animal. It isn’t. It’s an animal that was given its status only for socioeconomic reasons and nothing more. This little fact is something the Hindu fascist movement of today goes to great length to hide for reasons best known to itself.

(I’ve always found it interesting that other cattle owning societies in arid areas, like the Maasai of East Africa, escaped this particular road to perdition. I wonder why. The Maasai even bleed their cattle regularly and use the blood for food.)

Today, of course, the old verities no longer hold. Cows are no longer essential draught animals. The tractor has taken over the plowing and the pulling, and the water buffalo, which gives more and much better milk than the scrawny mongrel Zebu, is the animal of choice for the dairy industry (interestingly, buffalos are eaten; there’s no taboo about them). More people eat meat than before, and in larger amounts. And – in feed per kilogram meat – it takes less feed to raise a large meat animal like a cow than the equivalent in goats and sheep.

Unfortunately, there are two problems in achieving that undoubtedly worthwhile goal.

First is the fact that the exalted position of the cow is so deeply ingrained in Hindu consciousness that it will take centuries to get rid of it…if ever. Clear-headed individuals may decide on their own to consume beef, but unless they live in one of the beef-eating parts of the nation (like me) they’ll probably never get to even see cow flesh on sale, let alone get the chance to swallow a piece.

The second is the fact that the Hindu Right – the Hindunazis as I call them – have adopted “cow protection” as a political platform. This is because they, being typical fascists, need a national enemy and have chosen the Muslims as the national enemy. Muslims eat beef. Ergo, cows need to be protected from the evil Muslim, who is bent on reducing the “cattle wealth” of the country. The non-Hindunazi parties will never risk ceding political ground to the Hindunazis and will therefore never take any steps to dilute the cow’s protected status. I suppose we’re lucky that we can still kill and eat cows in our part of the country. It might be a freedom that won’t last too long.

The irony is, of course, the status of the cherished Hindu Mother Cow. Any bovine in a beef-eating nation, even if a meat animal on a factory farm, lives healthier and better than the starving Indian street cow. If the Hindu sees the irony, though, he takes care to hide it – even from himself.

It’s a tragedy of its own making.

By: Bill the Butcher
It’s one of the commonest sights on Indian streets, so much that it’s a staple in caricatures of street scenes: a cow, usually chewing the cud, standing in the middle of traffic or on the pavement, people and cars respectfully giving the animal a wide berth.

Searching for the Soul of New Orleans

Live from Argentina: Sarah Palin is no Evita!