Australia… Land of the Great Firewall 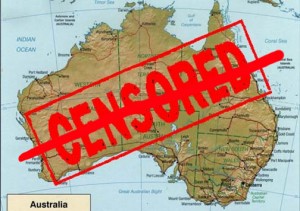 By Malice in Wonderland

As the world celebrates the start of the new year, the Australian government is planning to mandate ISP filtering.

In an unprecedented move for a democratic county, the Australian Federal Government is now about to legislate its plan for internet censorship on this continent. The decision was justified through emotive language and stated that its main aim was to “protect our children” from “inappropriate” content. Such was the wording that anyone seen to oppose it was deemed as being pro child pornography and thereby an unconscionable reprobate.

However, while the government claims to care so much for the well being and welfare of our children, it’s actually cut funding to those very agencies which ensure their safety. The Department of Child Protection has a backlog of cases where children are in real danger from very real abuse and are working with a skeleton crew due to lack of funds. Likewise, the Australian Federal Police which has in recent years been very successful in breaking up a number of pedophile rings operating from within this country have had their funding cut. Surely, if real protection were the issue here, it makes more sense to fund those agencies already in place whose specific job it is to protect our children rather than starve them of funds and put in place an internet filter which not only will not work, but will cost billions and infringe on the civil liberties of ordinary law abiding citizens.

The proposed system will operate by a mandatory monitoring and screening of all internet connections through ISPs in Australia, both public and private, and then routing blacklisted addresses through a secondary system. And if that doesn’t give you pause… the most alarming feature of this is that the blacklist itself is secret, and all of the data about attempts to reach blacklisted sites is secret. Why isn’t the list being made public?

So who decides the blacklist, which the government says provides cyber-safety for families from material such as child sex abuse, sexual violence and instructions on crime and or drug use? It would be compiled using a public complaints mechanism, Government censors and URLs provided by international agencies.

So exactly what will be blocked and who will decide? We don’t know, as the list will be secret and the reasons for any ban will be secret. Not only are the URLs censored, but the list of censored URLs is itself censored. So much for an open Australia.

The Rudd Government’s rhetoric about cyberspace is that it is protecting us from pedophiles, stopping terrorists, and all that blacklisted bad stuff on the big bad internet. Since internet filtering is about what information may or may not flow through the public internet, it’s heavy Nanny state foot enters freedom of speech and individual freedom territory.

Of major concern, too, is the fact that the RC classification is a category that doesn’t just deal with abhorrent material like child pornography, bestiality and active incitement to violence. Given the current broad terms under which material is slotted into the category it would also potentially embrace sites where people talked therapeutically about child sex abuse experiences, accessed information about safe sex and drug injecting practices, or engaged in serious political dialogue about what motivates terrorist groups.

Hence, it can (and will) block social advocacy sites that are not pornographic. The vocal minority has always known that censorship quells robust dissenting speech by projecting doubt and fear of prosecution onto the fringes of legality. Our classification system is so broad that it cannot help but hoover-up political expression on the margins, and it inevitably influences and shapes political debate in this country. So it is a freedom of expression issue. Is it the role of the government to decide what people can see and do on the Internet? Or are these personal decisions that should be made by individuals and their families?

This is also about control… specifically government control… and the internet is one area western governments have thankfully had little control over. There is far more at stake here than “child protection” and as some have already speculated, Australia may be being used as a “test case” for a global filtering system and the implementation of the Australian Federal Government’s ISP-level filtering could spark worldwide adoption of Internet content filtering.

Are we ready for that kind of censorship?

By Malice in Wonderland – Australia sets the stage for Internet censorship. The question is, how far it will go and will it herald an end to free speech?