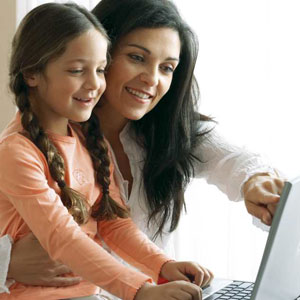 Home-schooling; the wave of the future; the practical design that allows you to prepare your child’s education within the modern world by the standards long cherished and protected as family values.  Taken up in the 1960’s as a counter cultural movement toward early levels of higher education, the practice has caught on with the basic appeal of choosing your own environmental settings and allowing the child to explore academic potentials at his or her own pace.  On March 17th., 2009, a custodial decision by Judge Ned Mangum of Raleigh, North Carolina suddenly turned media attention to the home-school community.

The case involved Venessa and Thomas Mills, a recently divorced couple.  According to the father, Venessa has been home-schooling her children for four years, under the guide lines of the Sound Doctrine Church, which provides the educational material and spiritual guidance for its members.  He states he originally agreed to home schooling, although only as a temporary structure, however it was her ties to the Church that had initiated their divorce.  He stated that, “She became unrecognizable as the person I married, and, in the name of her religion, she distanced herself from me.”

During this estrangement, he admitted having an affair.  “Venessa Mills expressed appropriate concern for his transgressions,” the court order stated.

Venessa Mills asked the court to order that her husband have no decision-making authority related to the children’s education or religion.  The judge ruled that the three children should be placed immediately into public education and that both parents should have the opportunity to influence the children’s religious development.

The Sound Doctrine Church is one of the larger and more successful of the religiously based home school educational programs.  1.9 to 2.4 million children are home-schooled, up from just 300,000 in 1990. According to the US government’s National Center for Education Statistics (NCES), 72 per cent of home-schooling parents interviewed said that they were motivated by the desire to provide religious and moral instruction.

The Home School Legal Defense Association, which now counts 81,000 families each paying about $100 a year in dues, was founded in 1983 by Mr. Farris, a lawyer who had been a protégé of Tim LaHaye, the conservative Christian political organizer and best-selling author. Mr. Farris and his wife home-schooled their own 10 children. Like Mr. LaHaye, Mr. Farris is a novelist. He has written three legal thrillers involving conservative Christian issues. His latest, ”Forbid Them Not,” begins with a Democratic landslide in the 2004 elections that leads to a nightmare of laws blocking parents from spanking their children, teaching their children fundamental Christianity or schooling them at home.

Mr. Farris was a novelist with a dream.  In 1997, he decided there needed to be a college for his Christian homeschooled students to attend.  One of the first and most significant contributors to sign on was Dr. James Leininger, a Texas physician, home-schooling parent and part-owner of the San Antonio Spurs. Dr. Leininger had made a fortune as controlling shareholder of the medical-bed manufacturer Kinetic Concepts Inc. He also owned a conservative political consulting and direct-mail business, and he had already become one of the biggest political contributors in Texas. He became known for backing Christian conservative candidates to the state’s influential school board. And, as a board member of Children First America, he was also a major patron of the push for school tuition vouchers.

Thanks to the generosity of its donors, Patrick Henry operates with no debt, eschews federal financial support and charges about $15,000 per student a year for tuition, about $10,000 less than some comparable small colleges. The average SAT score is about 1320, roughly comparable to Notre Dame or the University of Virginia. 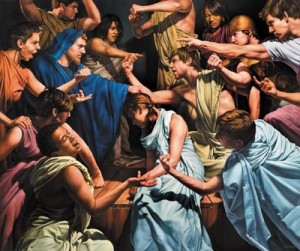 Of the one hundred interns groomed for working in the White House this semester, seven are from the roughly 240 students enrolled in the four-year-old Patrick Henry College, in Purcellville, near Washington D.C.   An eighth intern worked for the former president’s re-election campaign. A former Patrick Henry intern  worked on the paid staff of ex- president Bush’s top political adviser, Karl Rove. Over the last four years, 22 conservative members of Congress have employed one or more Patrick Henry interns in their offices or on their campaigns, according to the school’s records.

The necessity to separate Church from State is self-evident.  Discriminatory laws attacking blacks and Native Americans, and which continue to be an issue today among those who successfully evaded the Civil Rights campaigns of the 1960’s, are founded on a Christian dogma that claims these racial distinctions are punishment of a vengeful God for past sins.  The Monroe Doctrine; the biggest stain on American Democracy; sought to expand its Christian ideology through territorial invasion and forced religious education.  The abortion platform has degenerated into one of religion versus science, instead of one that deals directly with the mental and physical well-being of the mother who ultimately must be bear the brunt of any decision concerning her unborn child.  The religion motivated anti-abortionists say they will give no quarter.  A woman’s body is no longer her own once it houses a child.  The unborn rights supercede hers.

The issue of whether creationism should be taught in the schools is an old one.  After the Scopes Trial (Tennessee, 1925) the theory of evolution gained much public support. However, this did not translate into evolution being taught widely in the public schools of America.

State creationism laws were passed during the 1980’s in Arkansas and Louisiana, to force the teaching of creationism in place of evolution. In a 1987 case, Edwards v. Aquillard, the U.S. Supreme Court ruled that these laws were unconstitutional because they violated the establishment clause of the 1st Amendment of the U.S. constitution. Creation science was seen to be a expression of religious belief. It was judged to be not a true science because it could never be falsified — i.e., it was firmly held as a religious belief by its adherents that no amount of contradictory physical evidence could change.

A board of Ontario Consultants on Religious Tolerance concurred that creationism could be taught alongside evolution as an illustration of particular religious beliefs, but it could not be taught as a science.  Creationism versus evolution is not a conflict among many Christian organizations. 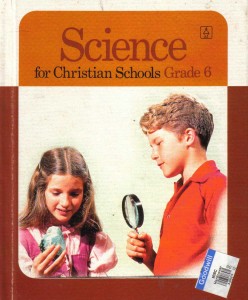 A minority of conservative Protestants, most liberal Protestants, the Roman Catholic Church, and most scientists accept either Theistic Evolution or Naturalistic Evolution. Both accept that evolution of the species has happened, and that the earth is over 4 billion years of age — some 500,000 times older than young-earth creationists believe.

Over 95% of scientists generally, and over 99% of scientists in the fields of biology and earth sciences, accept the theory of evolution. These beliefs estimate the earth to be about 4.5 billions of years old.

Creation science based on the biblical book of Genesis cannot constitutionally be discussed in isolation. The beliefs of other religions, and of secular movements would have to be taught along with the Judeo-Christian-Muslim belief. Otherwise, Judaism, Christianity, and Islam would be seen as being promoted by the school as superior to other religions and to a secular lifestyle.

General acceptance of creation science would mean that the entire foundational structure and inter-relationships of many sciences (geology, biology, astronomy, nuclear science, etc.) would become meaningless, and would have to be abandoned. It would also directly conflict with one of the basic principles in the Bill of Rights concerning religious freedom.  At a time when it is necessary to compromise and regain the perspective that one is a science based on religion, the other a science based on mathematics and earth studies, we hear a battle cry of there can be no compromise.

America is not alone in its struggles to keep a religious belief from becoming the government legislated academic base.    David Modell of the UK  Telegraph recently covered the aspects of a growing fundamentalist movement that currently operates fifty schools within the United Kingdom.  Yet, according to Modell, Yet these schools are not operating outside the education system. Carmel is a government-endorsed faith school, complete with an Ofsted report that describes the teaching as “satisfactory”.

Modell reports visiting a class room where the six year old children were instructed to recite the lines, “The Lord has not dealt with us according to our sins nor punished us according to our iniquities.”  The teacher then went on to explain that, “Before Jesus came, people who disobeyed God got turned to a pillar of salt. So thank God for Jesus because we can say ‘Jesus, I’m sorry’ and we don’t have to fear getting turned into a pillar of salt, which really happened in the Old Testament.”

The lessons were centered primarily around “original sins”, with one child praying for another when it was discovered there would be a science test.  The prayer consisted of hoping the other girl would not make any spelling errors.

Modell states that this uncompromising dogma was imported from the United States It is called Accelerated Christian Education; the motto of the Florida-based company who produce it is: “Reaching the world for Christ, one child at a time.” It is an outreach that claims there will be no retreats.

The inscription on the Statue of Liberty reads, “Give me your tired, your poor,
Your huddled masses yearning to breathe free,”… and they came with their yearnings and dreams.  They came in droves, filling the shore with waves of immigrants,  the exodus of the uprooted, the religiously persecuted.  The diversity of their voices created an awareness and rapid exchange of intellectual ideas, resulting in a progressive Nation.  In order for this diversity to continue, there can be no established religion within the government.  There can be no Christian crusades.  Religious instruction within academic studies should be optional and apart from formal State approved formal education.  Home schooling, which broke ground as an alternative to public education by producing college accredited students, should not be crippled by a political agenda based on religious motivations.

The world has suffered much under the hands of those who had no regrets.  It has suffered elitism, exploitation and tyranny.  Our moral dignity has suffered under lies and deceptions.  Religious power, when placed in the hands of governing officials, is a club that annihilates all other basic human rights.  We must keep religion and science separate within our academic studies for it’s only through these separations that we can maintain an objective view and fully explore the potential of both science and religion.  It’s only through these separations that we can safeguard against religiously motivated decisions in our legislative body.  We must keep the distinctions clear, whether we are Christian, Jewish, Islamic, Matriarch inclined or atheist, for only then are we truly guaranteed the freedom of religion.

Without secular academics, we have an abolition of science, free religious expression and free speech – By Karla Fetrow

Australia… Land of the Great Firewall