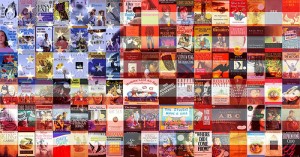 Books! Nothing else speaks louder than the written word. Nothing else initiates use of the intellectual skills like a book that stretches the imagination and challenges our thoughts to move beyond the parameters of our own culture, and our own mind. Nothing else has the power to stir, excite and bring us the color and the sweep of adventures in hitherto unknown lands. Nothing else gives us a passport to time travel, introducing us to the saints and sinners of history, putting us in intimate contact with them, and allowing us to come to know them and their ideas as well as we know our own family. Nothing else. Books!

There is also an intense loyalty that can be generated in the book-lover. This is a love that requires that a book be held in one’s hand, and barring a medical reason, not read to us over another medium such as a CD or a cassette. Holding the book and perusing the page is a part of the true reader’s ritual. It is a part of the pleasure of reading.

Since reading inspires such love, and the written word such respect, it also makes sense to me that we do not have to look very far to discover the other side of that coin, and when that shoe drops we can see fear, prejudice, ignorance and bigotry. We see the same emotions that led the Nazi party to burn the books written by Jews and intellectuals . We see it throughout history.

In the United States we tend to deny that we have burned books, but history does prove us wrong on that count. We have burned books and when it happened here it was also motivated by the same fear, prejudice, ignorance and bigotry I am thankful that incidences of book-burning are few and far between, and now belong to the pages of history. Such episodes wreak havoc with our status as a nation that enjoys “free speech” and are therefore frowned upon by most members of this 21st Century society.

Yet, instead of burning books, the modern United States seems to count among its citizens many persons who would see them banned. When one initiates the banning of books, is there a huge difference between that action and the burning of the volume? Except for exactitude of meaning, I would submit that the acts are closely related, since the result is that whether banned or burned, the book is no longer available to the person seeking to read it.

Banning of books is certainly not a new practice. It is probably as old as the written word itself. In the early days of the printing press, books were banned for their ideas, generally political or religious. The reading audience was smaller… many persons, primarily the poor were uneducated and illiterate. But the intellectuals also had to deal with the institutions that attempted to see certain books removed before they could be read and “damage” the reader.
The Roman Catholic Church had its “Coda of Forbidden Books” that was still in force well into the twentieth century, breathing its last in 1966. The Index had been established to secure the faith and morals of Christians according to modern paternalistic interpretation, but actually it was a means of control designed to prevent the stretching of the mind and to also prevent the questioning of the Church.
Many governments have denied their citizens the latitude to choose what books they may read, and they did this generally for political reasons – except in modern theocratic governed countries where book banning is the most rigid and often geared toward the suppression of any idea that questions the religion of choice..

In our own country, although official banning of books is difficult, it is not as rare as we would hope. Librarians constantly find themselves embroiled in controversy because they oppose these censorship efforts. School Boards may be the instigators of censorship efforts, or they may be the target if they have approved a book or books that are objected to by a single parent or a group of parents.
Most often the petitions to ban books have to do with the perceived sexual content of the books, or the perceived “homosexual agenda” of the author or of the librarian(s) who stand against the banning.

What books are regularly attacked? Well, in Vero Beach, Florida, a book called “Am I Blue? Coming Out from the Silence,” by Marion Diane Bauer is one. This book was singled out for attack because three library patrons objected to it being displayed. Other books banned in Vero Beach included “Baby Be-Bop,” “Girl Goddess #9,” “I Was A Teenage Fairy,” ” Weetzie Bat Boy,” “Postcards From No-Man’s Land” and “The Rose and the Beast.” In what might be characterized as over-kill, the banning of these books also prompted the town fathers to pass an ordinance forbidding county government from acknowledging or promoting gay pride and events.

“Am I Blue” was banned in an Arkansas town also, partly because its proceeds were ear-marked for Parents and Friends of Lesbians and Gays. (PFLAG)  The Oklahoma House of Representatives passed a resolution calling for the removal of all children’s books that refer to a gay character or a gay family. This however did not have the force of law .

It isn’t only gay or lesbian content that has raised the ire of those who would seek to censor books. The following list is made up of books that have suffered the same indignity, and the State in which the banning attempt has been made.

“I Know Why the Caged Bird Sings” By Maya Angelou – Kansas
“One Flew Over The Cuckoo’s Nest” by Ken Keysey – Kansas
“To Kill A Mockingbird” by Harper Lee – California (The Play was banned by a High School in Alaska.)
The “Anastasia” series by Lois Lowry – Florida
“All The Pretty Horses” by Cormac McCarthy – Kansas
“Beloved” by Toni Morrison – Kansas, Arkansas
“Harry Potter” series by J.K. Rawling – Michigan
“The Catcher In The Rye” by J. D. Salinger – Maine
“America (The Book)” by Jon Stewart – Mississippi (Wal-Mart also refused to carry the book.)
“Roll of Thunder, Hear Me Cry” by Mildred D. Taylor – Florida
“The Adventures of Huckleberry Finn” by Mark Twain – Washington
“Montana – 1948” by Larry Watson – Oklahoma
“Black Boy” by Richard Wright – Kansas

This is by no means a complete list of those books currently under fire in the United States, and the reasons for their banning are the same as have been the case throughout history. The list above contains several books that have become classic and are revered by the reading public. Yet to the eyes of the would-be censor, a line in a book that they find objectionable means the book should be hidden from the eyes of all readers. We have not yet learned that we cannot censor ideas, all we can do is educate, and education demands that access to these very ideas that engender fear or hatred must be read and discussed and defused. It is through availability and familiarity that we can put aside the rancor that persists in generation after generation, we can be open to discussion and we can put aside the self-appointed censor and become master of our own moral life.

The banning of books by church, school or government is a heinous act of violence perpetrated against the intellect of every reader and every potential reader. If the reader is adult, there should be no limits in literature. If the reader is a child, then age appropriate reading should not be censored, but rather education should be available regarding the intent and interpretation of what is read.

The Demolition of the Babri Masjid