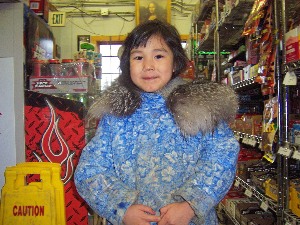 Sarah Palin isn’t a racist. As she pointed out, her husband is one-eighth Yup’ik. Not that he grew up in a Yup’ik village, or has any special concerns for his traditional Native heritage, but he has a sweet, eighty-seven year old grandmother who grew up on the Igushik River in the Bristol Bay region. Lena Andree was pleased when her grandson’s wife ran for governor and pointed out to the villagers the growing success of her grand-daughter in law. A blood tie between Todd Palin and the Yup’ik tribe did not garnish her votes in the Arctic Circle. The Native and rural communities voted against her by nearly a seventy percent margin. Her governorship was attained through the majority vote of Anchorage and small, urbanized Alaskan towns.

This might seem surprising to those who would perceive Palin’s marriage as an asset for gaining a powerful Native voice in State legislation. However, Native Senator Al Kookesh, co-chairman of the Alaska Federation of Natives, claims, “She’s just sort of absent on issues. It’s like an indifference.”. He further observed that Palin’s claims to ties with Native culture through her husband’s family have resulted in “no measurable impact on the Native community.
Rural issues never have been Sarah Palin’s forte. She has lobbied for sports fishing rights over the fishing subsistence rights of low-income communities. She supported a large mining operation that would be detrimental to the waters and wildlife of the Bristol Bay. In her own home town of Wasilla, she failed the agricultural and dairy industry. However, Alaskan rural Native issues have a distinct stamp that require special attention.

Over the last hundred years of exposure to white settlement, most Alaskan Natives have adapted to the introduced progressive technology. From sled dogs to snow machines, from bows to rifles; adaptation to electricity, central heating, televisions, computers, the Native community has grown from subsistence based housing to modern villages. Their industry has largely depended on fishing, hunting, trapping, timber and more recently; oil revenues. Although these industries never generated a great deal of income, it was sufficient to keep them warm and fed. Recent years however have seen changes in the villages’ abilities to be self-sustaining. Fishing, the main source of income for most Arctic rim villages, has been unable to compete with the larger commercial fleets and their prices. Late runs on salmon or lower than expected numbers have further handicapped the village fishermen from earning an adequate income. Other difficulties include sports lodges built close to villages where the well-to-do fly in, fish, hunt and pollute the streams, then fly out again. The funds generated by sports fishing are never seen in village hands, yet they jeopardize the fish and wildlife for village subsistence use.

The villages have been under the effect of rising costs for several years. Lacking a highway system, all goods, foods and fuel are transported by aircraft. Gasoline in the villages is now over ten dollars a gallon. Milk is nine dollars a gallon. Across the board, all products flown into the villages are two to three times higher than the average price paid by the rest of Alaska. These escalated costs have resulted in the discontinuance of electricity during the winter months for two years in a row in some areas, due to the inability of the villages to pay their bills.

Lack of substantial employment coupled with rising costs has begun an exodus from the villages into the city of Anchorage; mostly among the young people. They are ill equipped to deal with city life and are often the victims of exploitation and crime. Their feelings of inadequacy in coping with the transition has led to an epidemic of alcoholism and suicide.

As disturbing as the figures are for village unemployment, displacement and alcoholism, the most troubling aspect is the dissolving family unit. An enormous disparity occurs between the percentage of Native children removed from their biological families and placed under the custody of foster care and other populations. Although 72% of the population is white, white children placed in foster care make up only 36% of the statistics. While Natives make up 18% of the Alaskan population, 45% of the children in state foster care are Native.

The children removed are often from communities so small, they have one building to serve as the grocery store, diner and gas station. They are often placed in white homes in the middle of Anchorage and are overwhelmed with the cultural differences. A number of child welfare workers at the last conference of the Federation of Alaskan Natives, expressed concern over the difficulties of trying to work collaboratively with State Agency workers. They accused workers of not being culturally aware of the Native families and their life styles, criticizing them for being very quick to permanently removing children from the villages and place them in a separate environment. They felt this lack of consideration, which included not being invited to state planning committees was in direct violation of the Indian Child Welfare Act (ICWA).

Governor Palin has chosen not to look at the complaints of the Alaskan Native people, which left unaddressed, will amount to the genocide of a culture. Although her relations with the powerhouse regional Native corporations have been good, meeting with ANCSA Presidents and CEOs, encouraging regional corporation heads to work together, mainly on preparations for a natural gas pipeline, she has turned a deaf ear to rural Alaska’s plea for survival. She threw aside a plan for a connecting road system between the villages without even a preliminary discussion, despite asserting our general funds were bulging with development projects monies. She has withdrawn Native council from important state positions, replacing them with people whose views were more compatible with the dream of urban colonization and natural resource exploitation at the expense of our delicate ecosystem. In the words of Myron Naneng, as quoted by the Anchorage Daily News, equating Palin’s awareness of Native issues with foreign policy knowledge supposedly divined by Alaska’s proximity to Russia: “From her house, is she able to see the Native community and the issues we have to deal with?”

From her house, as Mayor of Wasilla, the paranoia in the Native community was so great, protests were staged for removing Native children from their parents for no better reason than sub-standard income. From her house, she saw satisfied upper middle class matrons strolling around with their cute, brown skinned, rosy cheeked foster children. She didn’t see the unhappy poor. She didn’t see the tear soaked families facing the worst disruption of their culture since the 1960’s policies of removing Native children from the villages to place them in boarding schools. She didn’t see the lives of those whose lives were not absorbed by commercial and oil interests. She didn’t see the differences in cultures, religion and ethical considerations from her back door. She won’t be able to see them in a diverse Nation.

Sarah Palin isn’t a racist. As she pointed out, her husband is one-eighth Yup’ik. Not that he grew up in a Yup’ik village, or has any special concerns for his traditional Native heritage, but he has a sweet, eighty-seven year old grandmother who grew up on the Igushik River in the Bristol Bay region. Lena…