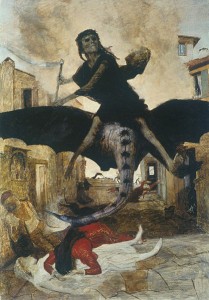 The children are rifling the boxes of old costumes, scouting the thrift shops for ideas and emptying the department stores of make up and accessories. The price of a fully assembled Pirates of the Carribean costume, complete with flowing cape and foil wrapped sword; seventeen dollars. The price of a plastic, cheesy, throw away outfit that looks exactly like what five hundred other kids are wearing; thirty five dollars. I’m not sure if the kids are learning a valuable lesson in economics or if they’ve just finally decided to do something about the saved clutter filling up their bedrooms.

There’s something that has always disturbed me about donning masks. It’s a natural attachment for children. They can pretend to be their favorite heroes. You don’t see scary kids on the streets anymore. They’re all ballerinas, marvel comic re-incarnates, or anime characters. The scary ones are always the grown ups, dressed as ghouls, truer than life witches and evil haunts. Growling and cackling, they nearly knock the pants off the little guys who run sobbing back to their mamas. The mamas laughingly reassure them it was a joke and that’s what Halloween is all about; scaring people.

If that’s the purpose of Halloween, I’ve been thankfully scared. The graduation ceremony from dolls to witches, from knights to beasts as we shuffle into the age of maturity reassures me that using fear as the driving force for success within our society has been a practical endeavor. One night of the year, we willingly join a masquerade that has become as creepy as The Red Death. Ordinary housewives are devil’s in a red dress with cute, pasty horns. Husbands lurch about with bloody axes. If we are to progress the human thought processes from child hood fantasies into adult desires of who we wish to be, I suddenly see a society of sirens and blood thirsty maniacs. All at once, the fascination with nauseating Saw sequels, disgusting Reality engagements and the ongoing illicit adventures of Quintin Tarantino and company evidenced by mainstream audiences becomes clear to me. It’s our duty to instill fear for our ability to scare each other is what brings us joy.

There is more to this enlightenment than merely realizing that by donning a mask once a year, Mrs. Bakes Cookies so Her Kids Can Go to Panama can reveal her true nature as a sex-deprived banshee with an appetite for frightening small children before they get half way to her door step. I’ve realized that the master marauders never do remove their masks. Give to your favorite charities, and under the mask of the receiver, you’ll see a program director raking in seventy grand a year. Spend your money on causes you consider worthy, and a team of lawyers under the guise of environmentalists and pro-development affiliates pile into the court system, tying up proceedings for the next ten years so nothing at all gets done except fatten the pockets of the advocates, attorneys and judges. Express dissent of war, desire a few effective programs for education, housing and medical facilities and you’re accused of hiding behind the mask of liberal socialism by those who hide behind the masks of Investigating Un-American Activities.

I’ve got to admire the new masked men; the inverted Robin Hoods. Give to the rich, so they can give to you the power to keep borrowing money from them a little longer. I wonder how many thrift shops and department stores they rummaged through to assemble that costume. It’s almost as ingenuous as bombing the shit out of a city then screaming we’d better get a little homeland security out here. We’ve all been sufficiently scared. The stock market mask carries the face of a juggler, tossing his balls around, calculating just how many to leave in the air until after the Christmas buying frenzy. Only the financial advisors themselves, disguised as financial advisors, can’t seem to figure into their calculations that in order for the public to buy anything, it has to have money. In the meantime, I change all my fifty state collector quarters into nickels which I throw into empty boy scout popcorn cans and guard with a sawed off shotgun. I’m putting in a garden next spring and placing land mines around it. I lay in bed at night with one eye open in case the wife gets the idea of prying my eight gold molars out of my head while I’m sleeping. The most practical thing to me would be to use what we have before asking for more, but that’s not the purpose of a masquerade ball. The jester swings down from the rafters with his sweeping scythe and he wants us afraid; very, very afraid.

By Sergio Impleton The children are rifling the boxes of old costumes, scouting the thrift shops for ideas and emptying the department stores of make up and accessories. The price of a fully assembled Pirates of the Carribean costume, complete with flowing cape and foil wrapped sword; seventeen dollars. The price of a plastic, cheesy,…