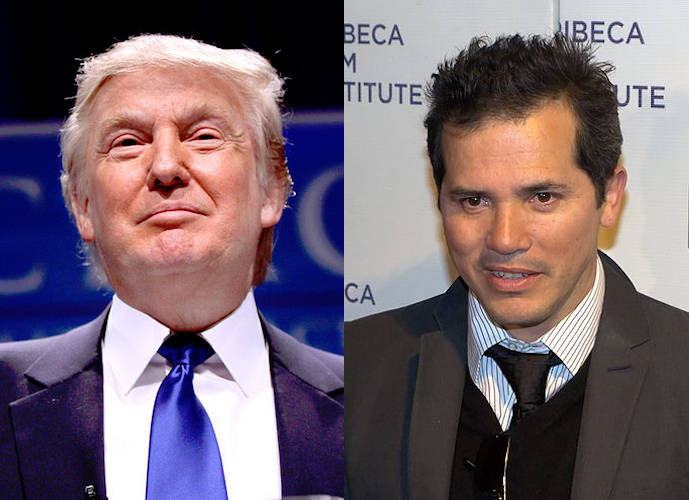 Republican presidential candidate Donald Trump hosted Saturday Night Live last weekend and delivered big ratings as predicted, which is precisely why producer Lorne Michaels brought him back. He did so in spite of a Latino community protest, several advocacy group protests, and even knowing that there were protesters right outside NBC Studios making a scene.

Viewers tuned in Saturday to watch several sketches of very awkward comedy, Trump campaigning for president, and of course, Larry David yelling out “Trump is a racist!” for $5,000 dollars granted from the Deport Racism advocacy group. Naturally, the bit was a joke, even though David did collect $5,000 according to the Deport Racism group, which said “Joke or not…it’s true.”

Next week, SNL will feature another Hollywood star, Elizabeth Banks, and everything will return to normal, right? No, according to some very prominent members of the Latino community who claim that their Saturday Night Live boycott is the real thing and the protest is far from over.

And it’s not just because Donald Trump is trolling the media as he’s been doing all year long. The problem is that for a long time now, Hollywood has been disrespecting the Latino community and Trump’s appearance on the show was the icing on the cake—a cake that went flying right into the face of a lazy-stealing-Mexican-rapist-illegal-immigrant stereotype that Hollywood thinks is hilarious.

What many people misunderstand about the issue is that it’s not a matter of silencing Donald Trump for his blatantly racist views. The problem is that many other members of the Hollywood elite have been blacklisted over the last several years for saying and doing far less than what Trump has said, and it’s a shocking double standard. The Latino Community is tired of letting White Hollywood get away with murder when it comes to allowing slanderous remarks about their people and culture, while still claiming to be a politically correct and non-hostile working environment.

What Saturday Night Live producer Lorne Michaels did was give Donald Trump a huge platform to campaign for president and profited well from it. He certainly didn’t need Donald Trump but sought him out and gave him just what his presidential campaign wanted—more airtime. This was not merely “free speech” but corporately sponsored free speech that literally cost millions to produce.

Is There Anything Wrong with Using Controversy to Generate Publicity for a Show?

The age-old argument that controversy sells has long been retired in Hollywood, at least when it comes to the right kind of people.

Consider other well-known cases in which Hollywood turned on celebrities for their unacceptable opinions, either blacklisting them or even firing them from their shows.

Actually, if you remember the well documented history of Saturday Night Live you would find that many celebrities have been permanently banned from the show for breaking protocol, saying offensive things to the cast, and generally being politically incorrect.

The truth is that Saturday Night Live allowed Donald Trump to campaign for president under the guise of comedy and did so in defiance of the Latino community, who made their protests known. In all likelihood, they orchestrated this event just to provoke Latinos and get them riled up about it, all the while benefitting from huge viewership.

It’s hard to imagine Lorne Michaels supporting an actor or director who publicly or even privately said offensive things about African Americans, gays or lesbians, transgender Americans, Christians or Jews.

Which brings up a certain elephant in the room topic.

Shouldn’t Lorne Michaels as a Jew in Hollywood, and one that has no doubt heard the anti-Semitic remark that “Jews run Hollywood”, know better than to buy into offensive stereotypes or support someone that uses them for profit? It’s very likely that Lorne Michaels’ parents or grandparents faced bigotry when first arriving to North America. When Jewish families first arrived in America and Canada, many lived in ghettoes and faced racist attitudes coming from whites, German sympathizers and other anti-Semites that were definitely anti-immigration.

The circumstances that necessitated the arrival of North American Jews was a chilling parallel of the plight of Latinos today. The Madagascar Plan was proposed by Nazi Germany as a relocation plan for the Jews, which would send these unwanted and “troublesome” people to the now German occupied former French colony.

Before Nazis decided on the Final Solution they encouraged emigration of the Jewish population, then planned for forced deportation. The Final Solution of genocide was just that—a final move after their other strategies proved unfeasible and the estimates of how many Jews could be settled in Madagascar proved to be too challenging for their future plans.

The Madagascar Plan is very similar to what Trump wants to do with Latino undocumented immigrants, in lack of a better solution—ship them all out to Mexico because they are essentially, thugs, drug dealers, rapists and “bad people.” With his construction of a “Wall”, Trump would quite possibly outdo President Obama in the total number of Latino deportations, which would break up countless families, deport legal Latino citizens whose parents were never able to qualify for citizenship, and probably resulting in many deaths, considering the added possibility of police violence against protesters and criminal activity happening in Mexico.

Of all people, Jewish Hollywood—who so boldly stands up for the LGBT community and African American racism—should understand why Trump’s presidential campaigning was not appropriate for an entertainment show like Saturday Night Live.

What was Lorne Michaels excuse? Besides ratings, which we’ve established mean nothing when facing allegations of bigotry that usually gets a person banned?

Some celebrity Latinos have joined the boycott, including John Leguizamo. Director Alejandro Gonzales Inarritu (Birdman) has also spoken against what he calls xenophobic comments.

However, many high-profile stars have done the unthinkable and defended NBC’s decision, as if they had no choice but to accommodate Trump’s “rights”. Latino TV star Eva Longoria said “This is part freedom of speech, freedom of press…Trump has his right…not only that, Lorne Michaels has a right to book whoever he wants.”

Coincidentally, or not so coincidentally, Longoria is also sleeping with the enemy. She has a new show coming out on NBC Telenovela and has everything to lose in upsetting her bosses and other VIPs behind the scenes. All of whom are conspicuously white, Jewish and not Latino.

One could literally count the number of Latino stars that have been part of the cast of Saturday Night Liveover the yearson one hand—two. For that matter, only 19 of the 790 SNL episodes over the past 40 years have had a Latino guest host.

Rather than actually stand behind Latino comedians on the show, Lorne Michaels instead relegates them to digital platforms, including his upcoming digital channel “Broadway Video” where Latinos can produce their own sketches, get popular, and then pay Lorne Michaels extra Internet advertising profit. It’s a great business strategy – invest nothing, keep Latinos off of network television, while letting their sworn enemy campaign on his show, and then profit from the suck-ups who still think they can get famous with a viral video.

This idea of “giving back” to the Latino community in the form of a digital production is not at all reparations for the blatant prejudice that has consistently been shown by Hollywood. It’s vanity producing and predatory to the artist who really thinks these powerful people are doing them a favor by letting them perform on a medium that is already free. It’s clearly a matter of Latinos pandering to Latinos and the answer is a firm “Thanks but no thanks!” from the boycotters.

The Trump–SNL debacle and the Latinos who supported it are more patronizing than any offensive stereotype on a comedy sketch. Whatever great strides or triumphs we thought we had as a united front all seem worthless now.

We’re not fighting for equality if this is what we’re up against. We’re fighting for the right to exist, living in the same territory as our white “superiors” who are “legal”. We continue to be treated as second-class citizens and when push comes to shove we have no power because our own supposed leaders are in bed with the powers that be.

This is why now more than ever the Latino Community needs to stick together and boycott NBC, Telemundo, and all of Saturday Night Live’s sponsors, who never thought that letting a self-admitted xenophobe would be upsetting to us.

How Times Have Changed

A long time ago, now-retired talk show host David Letterman admitted that a certain presidential candidate offered to do comedy sketches on his show. Letterman declined his request because he knew that it wasn’t in the interest of comedy—it was just a political campaign, an advertisement. His show wasn’t going to be a platform for an agenda. Common sense, right?

Have we fallen so far from civility and class that we consider Donald Trump an entertainer? That his contributions to comedy are so important that it’s worth offending millions of Latinos fighting for their very lives?

Or are we only being suckered by Hollywood who doesn’t seem to care about Latino issues, but would rather give airtime to a racist buffoon trolling the media, rather than actually bring on a Latino comic that’s funny?

According to a story from The Huffington Post, in the midst of all the Donald Trump protesting taking place outside NBC Studios, there was one lone protester who held up a sign reading “Google it!!! Jews control Comcast NBC”. He was quickly escorted out of the main protest area by police and taken away from the cameras.

Because of course, that was just plain racist.

#RacismIsntFunny. Freedom of speech means the freedom to boycott SNL and NBC/Telemundo for being sellouts. A united community has the power to make a statement of protest by boycotting the sponsors for Saturday Night Live.

Vanessa Verduga is an actor, writer, singer, director, producer and lawyer committed to examining social issues for their impact on the underprivileged and disenfranchised. She is the creator and star of the popular award-winning web series and comic book Justice Woman, which follows the story of an Assistant District Attorney, by day, who becomes a defender of truth and justice at night. Vanessa also stars and produces H.O.M.E., a feature film that examines the loss of communication told through the immigrant’s perspective, as well as The Hunting for Lost Characters, a sci-fi action short film that follow’s one man’s desperate attempt to save himself from deletion. Most recently, her dark comedy play The Implications of Cohabitaton has been picked up for a New York City off-Broadway production. Vanessa is also a member of the Women in Comics Collective NYC International, an artistic and informative initiative that seeks to educate communities about the role and value of Women working in the comic book profession. For more on Vanessa, visit http://www.VanessaVerduga.com

Donald Trump Hosts Saturday Night Live and Hollywood Says F**k You to Latinos by Vanessa Verduga Republican presidential candidate Donald Trump hosted Saturday Night Live last weekend and delivered big ratings as predicted, which is precisely why producer Lorne Michaels brought him back. He did so in spite of a Latino community protest, several advocacy…