Scare Me- And Win Stuff! 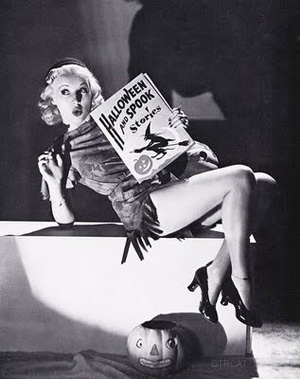 Subversify doesn’t often do giveaways, mostly because we are privately owned and we are writers so…you know light on change.

But, what you may not know about us is collectively autumn and Halloween is our favorite time of year.  Most of us love the darkening nights, the autumn air with the hanging scent of hearth fires started for the first time, wet leaves in piles that you can kick through and most of all Horror.  Horror stories in all forms, literary and film.

What you probably do know about us is we are jaded.  Of course we are, we’re grownups and we have been watching and reading these stories all our lives.  I can remember exhausting the bookmobile’s limited sources of horror by the time I was eleven.  I then started in on occult non-fiction so I could make stories of my own because you know, it was before internet and cable just didn’t happen in the country.

So, with all of our worldly viewing it isn’t very often that we come across gems that just make us smile horrible smiles this time of year.  A lot of what I end up watching I rage watch.  This means I entertain myself by yelling at the characters on the screen which is fun too, but what I really live for is surprise.

The last time I was pleasantly surprised was when The Late Mitchell Warren suggested Trick ‘r Treat-2007 which I had completely passed over thinking it looked hokey.  So challenge me, change my mind.

This will be entirely subjective and judged by me-Grainne, maybe with some input from my cohorts, maybe not.  Sorry, no way around it.  And obviously Subversify staff will be disqualified, but not family members because I hate that rule.

It can be any genre of Horror at all, it doesn’t have to scare the wits out of me but it does need to leave me feeling like I have had fun.  This can be achieved with super creepy mood, Jump factor, psychological brain screwing, poking fun at the genre or complete gross out. Extra consideration will be given to indie films because I learned an important lesson inadvertently from a writer/director.

I had posted via twitter a thumbs down on a film by the name of Madison County I had actually liked the premise but found that it didn’t play well at all.  I still wouldn’t recommend it because it’s predicable and stopped short of what could have been very good.

The writer/director contacted me himself and gave me a razzing and after talking to him a bit I could see that he truly loved the genre, filmmaking and his story.  It’s hard though to make effective horror without cash.  There are many variables like getting good actors to believe in you and act, really act accordingly. (my words not his so you know…Eric England, it’s all good) So there’s that, any student or first time films will be taken into account accordingly.

The movies can be as new or old as you can find, but I can never have seen them before, obviously.  Also I need to be able to find them, so Netflix or if you really want me to see something obscure-send it to me, I’ll send it back I promise. You may also suggest series’ but if there is a build up you may want to let me know that so I don’t discount it.  I probably won’t be able to view a whole series before the end of this.

I feel like I shouldn’t have to say this but I will, no snuff which would actually horrify me but is illegal and I don’t even want to get into that.

Don’t forget not to leave out psychological thrillers and the like because very often they can be more horrifying than films categorized as Horror.  But have fun and know I love Cheeze.  A point which is well documented by my highly esteeming Southland Tales.  But also, I love the original Evil Dead trilogy (And who doesn’t?) exactly because of the unbelievability cheeziness of things like Ash travelling through time to battle ancient evil in ancient wherever it is he battles it.

Also look for films with good soundtracks.  As far as I know only two films have made publicized use of infrasound to make viewers scared: Irréversible-2002 and Paranormal Activity-2006.  But I have a feeling that many others either purposefully or accidentally have infrasound in them messing with viewer perception.

Not to go overboard on infrasound, but in brief it is low frequency sounds that both make people feel uneasy and can cause people to see apparitions.  You can read more about it here: http://en.wikipedia.org/wiki/Infrasound  or if you are short on time and like to be entertained watch this: http://www.cracked.com/video_18458_the-scientific-explanation-people-who-believe-in-ghosts.html

There can be only One! 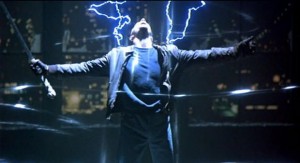 But that one is actually really excellent, Subversify swag of your choice.  You can choose a t-shirt, mug, water bottle, notepad whatever and I guarantee you will be the only one who has it except me…and the random people I give books to during World Book Night because I’m nice like that, they all have Subversify bumper stickers and/or magnets.  (You’re welcome random readers and hobos that I leave books on while you sleep)

You can find all of our products at our store: http://www.cafepress.com/subversifynow

I will make the announcement of the winner and any special mentions on October 25, 2013 so you all have time to watch the winning movie for your All Hallows fest if you so desire.  Of course you will also have a list via the comments of everything everyone else thinks is scary, whether I’ve seen them or end up picking it or not.

Alrighty then, any questions can be posted in comments as well.  Get your scare on people!

Miley and why She Can’t Stop