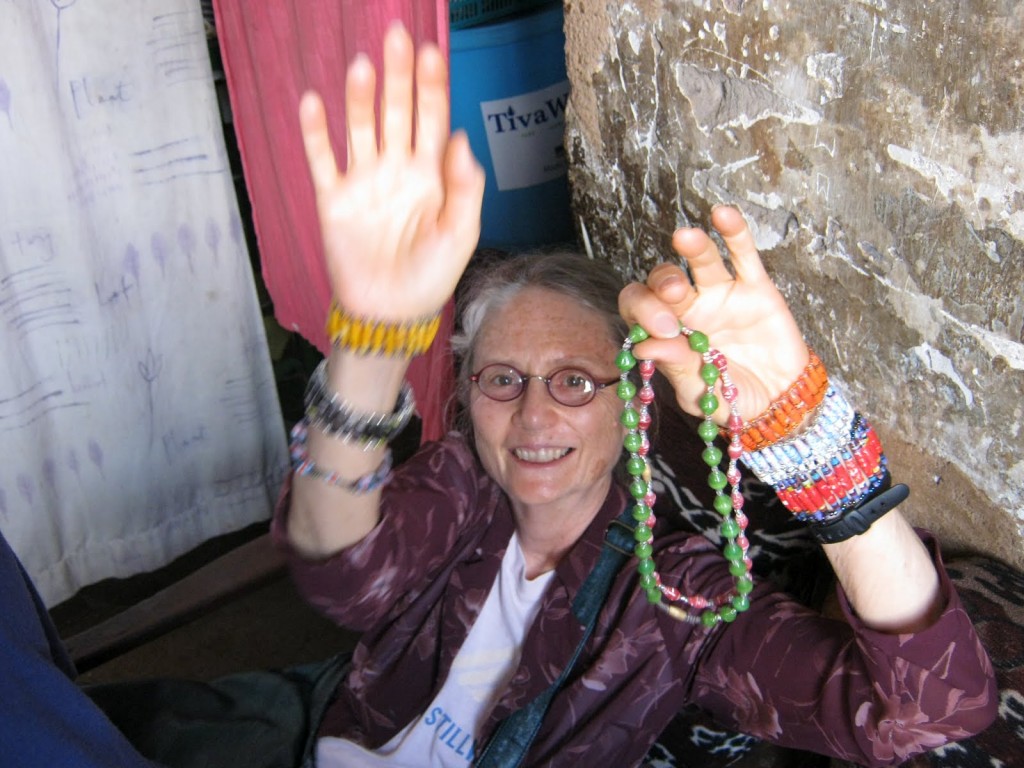 In early July, I left for Uganda on a fact-finding tour sponsored by Global Exchange — and have learned a lot of really amazing stuff since.

First, I learned that taking anti-malaria medication sucks eggs. Your stomach begins to feel nauseous, and then you break out in hives and then get the runs. And yet despite having to endure all this miserable uncomfortableness, there’s apparently still a fair chance that the freaking pills might not even work.http://www.bbc.co.uk/news/10522909.

Next, I learned about a mysterious “nodding disease” that is currently killing children in northern Uganda — where Big Pharma is routinely conducting various human drug trials on the locals.

According to Ugandan journalist Angelo Izamaa, “One of the undesirable facts about Northern Uganda, beyond the [LRA] conflict itself, was the attractiveness of its conditions for disease research.” Further, “Last year the BBC reported that Pandemrix, one of the vaccines [involved in drug trials in northern Uganda], was being investigated by several countries including Finland for the link to ‘nodding disease’ like conditions.”http://angeloizama.com/2012/03/01/invisible-children-response-to-nodding-disease-echoes-the-northern-uganda-war-and-more/

And then I developed a really bad cough. Really, really bad. Bronchitis. “Can you PLEEZE take me to visit a witch doctor?” I begged. But then I found out that, in Uganda witch doctors demand a human sacrifice as part of the cure — preferably a small child with no scars. Good grief. I don’t think even the FDA would approve of that kind of cure. So I took massive amounts of vitamin C instead and that worked.

Next I read an article in Kampala’s leading newspaper which touted the fabulous effectiveness of a new cervical cancer vaccine for female minors — and how every young girl in Uganda should get this wonderful vaccine ASAP.

Hey, isn’t that the very same vaccine that many Americans now refuse to give to their daughters due to the drug’s horrendous side-effects which are way out of proportion to its possible ability to prevent a STD that may give you a form of cancer forty years in the future that is already easily detectable by a Pap smear and thus relatively preventable anyway and may leave you dead at age 15 instead? Yeah. It is.

According to the Washington Post, “A new report (at http:/ / www.cdc.gov/ vaccinesafety/ vaccines/ hpv/ gardasil.html) by the FDA and the Centers for Disease Control and Prevention found that serious complications had occurred [from use of the vaccine, including 20 deaths], although the rate and severity of most side effects appear to be consistent with those of other vaccines.”http://www.washingtonpost.com/wp-dyn/content/article/2010/03/08/AR2010030802331.html

Now that a lot of Americans have stopped allowing Gardasil to be administered to their daughters, are its manufacturers now foisting off their excess inventory onto Uganda’s daughters instead? Anything for a profit, guys. 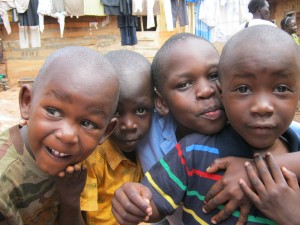 And speaking of vaccines, in Kampala I once again jumped head-first into that old argument over the costs vs. the benefits of giving babies and young children a whole bunch of doses of vaccines before they even reach kindergarten.

“If a vaccine can prevent horrible debilitating diseases like polio, then go for it,” is my point of view. “But as for the rest of the 38 different vaccination encounters recommended for children under the age of six by the American Academy of Pediatrics and being foisted off on our unsuspecting kids these days? 38 different doses administered to our babies in their first very vulnerable years of life? Really?”

“But without vaccines,” the other person responded, “we will run the risk of having measles epidemics and coming down with the mumps and hepatitis and….”

“But even whooping cough can be cured,” I then replied. “And even diphtheria. However, the occurrence of autism in American children has increased approximately 800% since the amount of vaccines given to them has proportionately increased. And now approximately one in every 88 American children suffers from some form of autism. Sure, autism has not been officially linked to vaccines — but what if getting 38 doses of vaccine in a very short time even MIGHT be the cause of it? Why take the chance? Whooping cough can be cured. Autism is forever.”

Still don’t think that autism is linked to vaccines? You are probably right. However, “All About Autism” magazine just featured an article stating that, “Approximately 50,000 adolescents with ASD will turn 18 years old this year in the United States. This is the first wave of children who were identified with autism in the early 90s.” Early nineties? First wave? There WAS a first wave? Right around the time that vaccines were becoming a fetish with Big Pharma? Huh?

Other miscellaneous stuff that I’ve learned here in Uganda? That women in the slums of Kampala cut up old magazines and calendars, turn them magically into beads and sell the beads to support their families. So I bought more bracelets than you can imagine from them — and they in turn gave me a tour of their homes, which were the size of many Americans’ closets. 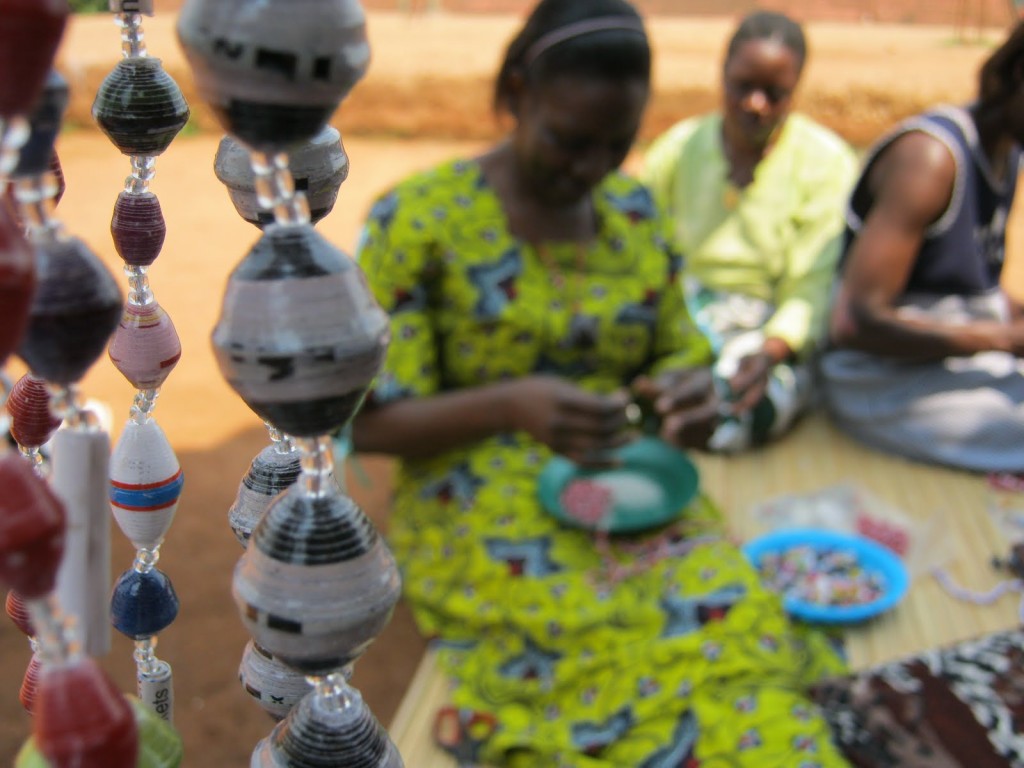 “The more money that I make from the bead business, the more that the landlord raises my rent,” said one woman who lived with two sons and a daughter in a 10×12 shack under a sweltering tin roof. “And he charges me 20 cents every time we use the latrine.” And there is no drainage system, no water pipes, no washing machines, no showers or nothing like that in this slum. And yet these women all emerge from their houses each day immaculately clean. How do they DO that!

After seeing this slum, I was totally amazed that everyone living there hadn’t already come down with cholera. But for them, this life is normal. And life goes on. 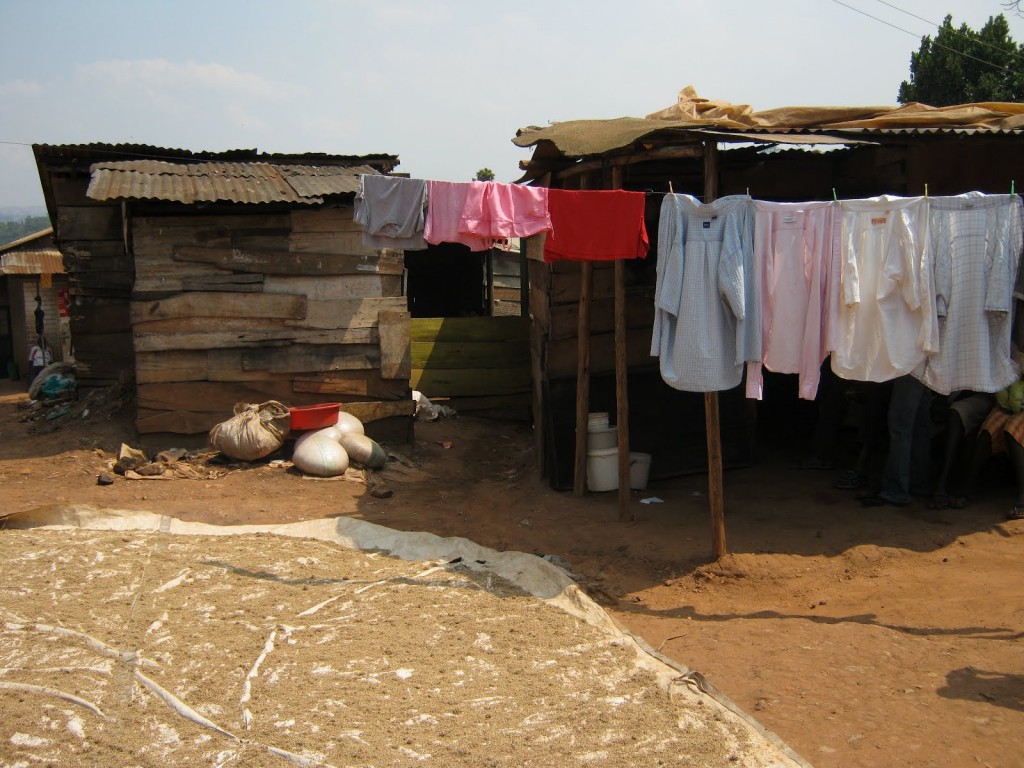 Jane Stillwater-In early July, I left for Uganda on a fact-finding tour sponsored by Global Exchange — and have learned a lot of really amazing stuff since.

Children of Uganda: They have NO safety net!