In this day of crime and punishment and black awareness of it, from the Trayvon Martin case, I can’t help but notice the solicitousness of the police in Los Angeles County when addressing black “victims”; and the wholesale neglect of victims of Latino descent.  And yes, I’m talking about the Kendric McDade case in Pasadena.

Absolutely not!  Anyone who observed the Trayvon Martin case and George Zimmerman should have asked how he was first categorized as “white” when he has an obviously “Latino” appearance — a definition (that although isn’t a race), is consistently used by police to describe perpetrators of Latino descent.

Indeed, Zimmerman is one of those South American blends (like me) — with a Peruvian mother and a white father.  With the name Zimmerman, I suppose some people could consider that a white name.  But, unlike me, Zimmerman had a clearly Latino appearance and yet, he was labeled first as white. 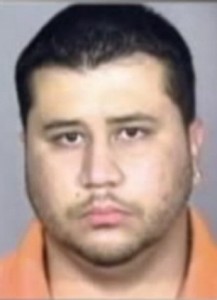 So, why would this happen?  The answer lies in the media and their efforts to fuel a long burning ember of racial animosity between Latinos and African Americas to make a story even more interesting.

By labeling this man white, it stirred up some good old fashioned images of the deep south and white racism; and that is exactly what black leaders needed to create the pandemonium to help the Martin family seek justice.   It didn’t help that Zimmerman made his own case against himself by offering up racial slurs during his interview with the police.  Clearly, this man was a racist.

When they concluded Zimmerman was Latino, they could add a new form of hate to that.  The blacks who have jumped on the immigration bandwagon, yelling “Go back to Mexico,”  to all Latinos who they hold responsible for their job loss, also came out to join against Zimmerman.

As a Latino, Zimmerman became more hideous, more evil, more insidious to many blacks for having murdered an innocent young black teenager; because, of the racial tensions between the two cultures.  That he was indeed a racist justified that hatred.  After all, here was one more Latino with what African Americans saw as a stereotypical attitude against blacks.

Even though Zimmerman isn’t an immigrant, he became the target of two issues with blacks:  uppity Latinos with racial intolerance for blacks, and black resentment over Latinos who many blacks see as taking their jobs.

As the debate over illegal immigration in the U.S. escalates, the scenario playing out among day laborers reflects a growing uneasiness among some blacks nationwide.

Many worry that the flood of illegal-immigrant workers crossing the border from Mexico is muscling low-skilled workers, many of them black, out of jobs in a number of industries — from the service sector to construction.

The showdowns are taking place on the streets of cities like Los Angeles, where African Americans have joined demonstrations against illegal immigration.

Some have teamed up with the Minuteman Project, a border-watch group that reports illegal crossings from Mexico into the United States, and whose members some have called vigilantes and racists.

Latino-black animosity isn’t a new phenomenon in race relations.  In many communities where blacks and Latinos live side by side they view one another with great suspicion.  There is a basic mistrust between many in the two very different cultures.

For years, Latino leaders have pointed the finger of blame at blacks when Latinos are robbed, beaten and even murdered. Blacks, in turn, have blamed Latinos for taking jobs, for colonizing neighborhoods, for gang violence.

In fact, even though hate-crime laws were originally created to combat crimes by whites against minority groups, the majority of L.A. County’s hate crimes against blacks in 2006 were suspected to have been committed by Latinos, and vice versa, according to the county Commission on Human Relations. 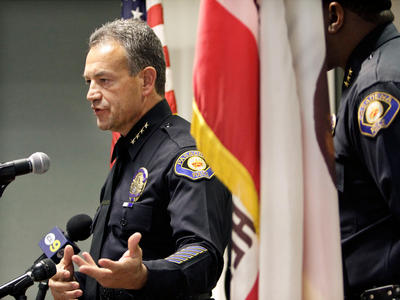 Pasadena Police have another Trayvon Martinesque killing on their hands.  A young black men, named Kendric McDade.  A teen who ran from the police after a report by a victim who has conveniently been labeled by both the black and white communities as an “illegal immigrant” — an easy way to dismiss a man’s word, value or worth in the U.S. today — reported that a black teenager had robbed him of his backpack and computer.

In short, Oscar Carrillo made a 911 call to report a robbery.  He had been robbed of his backpack containing his computer and  he reported the perpetrator was a “black man with a gun.”

In their investigation, the police noticed Kendrec Mcdade running, and a chase pursued.  Why a young man would run from the police if he were innocent, instead of answering questions, hasn’t been addressed.  But, his efforts to run from the police ended up getting him shot.  Supposedly because of the report that the perpetrator was armed and McDade reached for his waistband to hike up his pants.

Since Oscar Carillo gave a false report that the perpetrator had a gun, to ensure the police would respond sooner, he was arrested on suspicion of involuntary manslaughter for reporting the crime falsely.  The Pasadena Police Department did this as a way to offset the fact that a cop killed a black youth.  Indeed, Oscar Carillo knew for a fact that the man who robbed him did not have a gun.  But, he was not the person that ultimately shot Kendric McDade.

The result of this was that Mr. Carillo was held in detention for a brief time for giving a false report and then, released.  But during this detention, it was discovered that Oscar Carillo was in the country illegally.  And this has fueled an many resentments against Latinos  — who blacks have formed an anti-immigration stance on anyway.

So now, the victim has been held from deportation until the police figure things out.

None of this is new to Los Angeles.  The blame game between African Americans and Latinos has existed for sometime here.  It even goes as far back as 2007, when black activists marched into city hall to discuss gang violence between the two races; stating that Antonio Villaraigosa had failed to prevent violence by Latino gang members against blacks in South Los Angeles.

I’m guessing that African American gangs also shooting Latinos wasn’t considered racial extermination by this ‘unbiased’ woman.  The fact that gang violence was considered a one-way issue by this group isn’t completely amazing.  This has been a mindset in many African American communities for decades, ever since Latino families have been moving into predominantly African American enclaves.

On the same day, elsewhere in the city, Latino parents stormed out of a meeting of a Los Angeles Unified School District advisory council. The council had been fighting for months about whether to hold its meetings in Spanish or English — a dispute that got so abusive that district officials felt the need to bring in dispute-resolution experts and mental health counselors. On this particular Friday, the Latino parents walked out after a group of black parents voted to censure the panel’s Latino chairman.

These two events are certainly not isolated incidents, but they are the most recent examples of the long-running tensions between blacks and Latinos in Los Angeles.

Race not an Issue

I keep hearing people say that race is not an issue in these cases.

I’m calling bullshit on this one!  Race is not only THE issue, it is the reason Police  Lieutenant. Phlunte Riddle chose to address this crime with the Pasadena Community, when other murders never merit this much attention.

It is also the reason the Hutchinson Report aired a Townhall of the Air on Pacifica Network KPFK Radio 90.7 FM, entitled, “Is Kendric McDade Another Trayvon Martin?” The on-air town hall featured invited guests: Pasadena Police Chief Phillip Sanchez, Pasadena Mayor Bill Bogaard, Pasadena NAACP officials.  If this wasn’t about race, then why did this happen?

One thing that stands out with me is the fact that the Latino victim, who was robbed of his backpack and computer, has been vilified to satisfy the surge of black anger against Latinos, as the result of two innocent black kids who have been killed.

Or the attitude of many blacks who feel they have the right to scream that out to any Latino that displeases them.  We haven’t heard of retaliation crimes such as the one in Lancaster.

Palmdale Detectives have identified seven attackers associated with an assault that occurred near Cactus Middle School on March 14, 2012.

The 15-year-old Hispanic victim in this assault was walking home from school near the 3200 Block of East Avenue R-8, when a group of up to ten male Black juveniles approached him and challenged him to a fight.

The suspects surrounded the victim and began punching him while several other juveniles watched.

The victim continued to defend himself from the group of suspects until he fell to the ground. The suspects continued to assault him by punching and kicking him in the face and head. The victim was finally able to get his feet and escape the onslaught of the attackers.

After arriving home, the victim was treated at a local hospital for multiple kicks to his head resulting in swelling and shoe impressions left in his skin. The victim is also undergoing surgery to repair several of his teeth which were kicked out during the attack.

Note the date of the attack — March 30, 2012, seven days after Trayvon Martin was murdered (March 23rd, 2012) and sentiment was  high against Latinos.

Go Back to Mexico!

It’s something most of us Latinos and our family members hear on a weekly basis these days, from blacks.

Riding the bus to my medical appointment, a young Latino slides past a heavy set black woman and she grows irritated.  She shoots those words out as if this is socially acceptable, “Go back to Mexico!”  She doesn’t even know if the man is Salvadoran, Mexican, Peruvian or even an immigrant.  But the words ring out just like the words used to ring out against blacks. Her casual acceptance that this is okay, that she doesn’t care who this offends mimics the racial superiority of whites from years past.  It’s the ‘whites only’ attitude now used by many blacks towards Latinos they feel they have to compete with.

So the racial tensions grow.  How many innocent minority victims do we need to stop this?

I’m not condoning Zimmerman for murdering that innocent young man.  Zimmerman’s actions should have led to his arrest, just as the actions of the blacks who beat the Latino in Lancaster led to their arrest.

That there is disparity in whom is arrested and charged, is an issue every minority should be addressing, not just the blacks.  But on the same hand, this ‘Go back to Mexico’ mentality needs to stop.  If you want people to understand your plight, then you need to understand the plight of others.  I’m a bit fed up with hearing blacks feel as comfortable as the KKK in telling any Latino who displeases them, to Go back to Mexico!

Tell me that, and I’ll tell you to go back to Africa, so you can see how it feels!  That’s how it works.  Don’t like it?

To read more from Jennifer on this subject and others, visit her blog @ http://lawsonzepeda.blogspot.com/

Jennifer Lawson Zepeda- In this day of crime and punishment and black awareness of it, from the Trayvon Martin case, I can’t help but notice the solicitousness of the police in Los Angeles County when addressing black “victims”; and the wholesale neglect of victims of Latino descent.