The Ground Beneath Her Feet 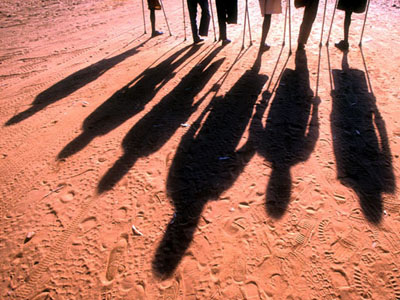 That was the day they were going to fit the girl with her artificial leg at the clinic.

The girl and her mother were already waiting outside when the doctor arrived, the girl sitting on a small plastic stool. The mother was peering anxiously down the street in the wrong direction, and the girl attracted her attention by tugging on her ao dai at the doctor’s approach. She turned, with a relieved smile.

“Good morning,” the doctor said carefully. It wasn’t easy for her to speak the language, because the tonal variations often proved too much for her to manage. “I am glad to see you.”

The girl’s name was Truong. She was seven years old, with a round face which fell naturally into a grin – a grin made even more engaging by the fact that she was in the stage of losing her upper front milk teeth. She was vivacious, friendly, and in love with the world – even though she had lost her left foot and most of the leg below the knee.

The doctor had done the emergency amputation herself, several months ago, just three days after arriving in the country. She still remembered the mangled mess of tattered flesh and splintered bone which had hung from the girl’s unconscious body, that night in the hospital with the big moths fluttering at the window. She had done what she could, clamping off the blood vessels in a desperate attempt to stop the bleeding, knowing that despite all her efforts the girl was almost certainly going to die.

Truong had stepped on an anti-personnel land mine. She’d been running through the fields with her family dog, when the mine had gone off under her left foot and hurled her through the air, her lower leg smashed. The dog, who hadn’t been harmed, had fetched help, otherwise Truong would have bled to death right there in the field.

The country was full of the mines, left over from the war, though the war was over a decade or more ago. They were vicious little things, flat plastic cans coloured to match the earth and leaf mould, and not even merciful enough to kill outright. They were far more sadistic than that.

The doctor had come to this country specifically because of the landmines. She’d heard of them, of course, with some disquiet but not a lot of interest. After all, they were only ever used in little bush wars on the opposite side of the planet. And then, one day, just after she’d finished her surgical residency, she’d – to please a friend, an anti-mine activist – gone along to an exhibition by an anti-landmine group in the city.

The exhibition had a lot of things that had dismayed and disturbed her – pictures of wounded kids and crippled farmers, dogs and buffaloes with missing legs, maps of the countries where mines had been planted with shading indicating just how much still needed to be cleared, the legacy of long-dead wars.  But the most disturbing part of the exhibit had been much more personal.

It was simply a stretch of raked ground, over which visitors were invited to walk. What they didn’t know, but soon found out, was that fake anti-personnel mines had been randomly planted under the dirt, ready to go off at the slightest pressure and shower their legs with puffs of talcum powder. The doctor had frozen, terrified, halfway through the stretch, suddenly wet with a cold sweat as she imagined the talcum powder replaced by high explosive and shrapnel.

The next day she had signed up with a UN agency as a volunteer to do mine-clearance work. They had accepted her with open joy, because they’d needed someone like her. As a surgeon, she was assigned to a trauma clinic, to repair the damage done by the mines, not to remove the mines themselves. But she was still an important part of the effort.

She was also throwing away a lucrative career as a surgeon in one of the top hospitals of her home city. Nobody had understood – not her parents, not her classmates from the medical college, not even the activist friend she had gone to the exhibition with. But it was not important that they understand. Two weeks later, she’d been on a long distance flight, with vaccines in her body and no clear idea of what awaited her in her mind.

And three days after that, there had been Truong. Looking at the girl now, the doctor still couldn’t quite make herself believe she’d survived. The morning after the surgery, it had seemed a miracle enough that she was still alive. And now, several months later, the stump had healed up and she was finally going to get her prosthesis.

As the doctor inspected and massaged the stump of her leg, Truong prattled on in her own language. The doctor could only understand a word here and there, and got only that the girl was talking about all the things she intended to do with her new leg.

“You will have to take great care of the stump,” the doctor told the mother, slowly and carefully. The instructions could have been given much more quickly and clearly by one of the nurses, and in any case would be repeated by them, but it was important to her that they would be understood. She felt personally responsible for Truong. One of the things she asked herself sometimes was that if it had been another, more experienced surgeon, whether the girl’s leg perhaps couldn’t have been saved. “You must wash the stump daily with soap and water, dry it and apply the elastic sock, and after that…”

As she spoke, fumbling for the words, the doctor looked up at the mother, wondering if the other woman herself thought someone older and more experienced might not have saved her daughter’s foot, and if she secretly distrusted the doctor, this big ugly foreign woman with the freckled pink skin and straggling brown hair. But the mother was only listening, nodding her head, and clutching her daughter’s hand tight, so tight that Truong winced and said something sharply.

Afterwards, when the false leg was fitted and Truong took her first few steps, the doctor looked up suddenly from the girl to find the mother’s eyes were fixed on her. She had a very strange expression in her eyes, and once again the doctor wondered if the woman shared her doubts about whether the girl’s leg could have been saved. But the woman, though thin and aged beyond her years, had a kind of grave tired dignity, and it was impossible to see through it to her real emotions.

Later, when the leg had been adjusted and Truong had achieved some control over it, the mother smiled, almost apologetically. “Thank you, doctor,” she said, slowly so the doctor could understand. “We, her father and I, we did not think she would be able to walk again.”

The doctor was embarrassed, and began going over the care of the prosthesis again. But the woman laid a hand on her arm.

“I know all that,” she said. “You told me already, doctor. Her father had said, it is enough if she lives. But when he found out she can walk, he could not stop crying.”

“Her father?” The doctor asked uncertainly. She had never seen the girl’s father. He had not come even the first time, the night of the mine, and the woman had not mentioned him earlier, not even once. “He cried?”

The woman nodded her head with slow gravity. “Her father, you are wondering why he did not come. Four years ago, when Truong was three, he stepped on a mine. It blew both his legs off at the thigh. Walking is like a miracle to him.”

Smiling again, gently, she took her daughter’s hand and led her out of the clinic.

B Purkayastha- She was vivacious, friendly, and in love with the world – even though she had lost her left foot and most of the leg below the knee.

Aftermath – The Birth of the United Workers’ Army