St. Patrick and the Giant Snake 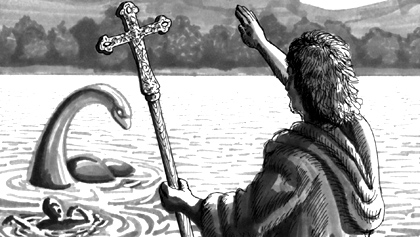 It was late 1947 and I guess that mum, (God Rest her), must have been pregnant once again. That was nothing unusual for it seemed to me, a seven year old, that she was always either just about to have a new baby, just had one, or she and the old man were thinking of having another. In any case, off we were sent – and I must say not reluctantly – ‘down the country’ to the village in the centre of Ireland to stay with Granddad and Granny Gorman for a week or ten days.

Winter was coming on and when the wind blew across the local bog with rain coming down like stair-rods, there was little to do especially during the dark evenings. In the summer it was the most wondrous place for a young boy and at such times, we, that is my brothers Ger and Jackie, would spend from dawn to dusk playing in the fields getting up to all sorts of mischief. We drank water from the bog-holes or little stream and ate anything that we considered edible. How on earth we did not poison ourselves, God only knows…

I suppose we survived on the principle that Granddad had taught us – ‘that anything a bird can eat, so also can humans’. Proving his theory at times took some great willpower as I, as the youngest, was always the taster. Anyway, we always had Granny Gorman’s doorstep sandwiches to fall back on.

Well, as I say, there was little of that this time of year and we spent most of the evenings sitting around the large peat open fire singing songs, reciting poetry and telling stories. Leastways, the older ones, especially Uncle Mick or Uncle Paddy told some of the most gruesome horror stories that I have ever heard and I would have been quite ashamed of myself if I had not been sitting in my favourite spot – the hob, right up against the fire under the chimneybreast. You see, some of Uncle Mick’s stories used to frighten me so much that I sometimes peed in my pants. Luckily, the heat from the fire usually dried me off before it was time for bed.

With the oil lamp flickering and throwing its dim light across the room and the fire crackling and spitting from the damp turf that was on it, it is now obvious why we as children could be frightened out of our wits with some of the ghost stories that were told.

“Hold your tongue now Mick” Granddad spoke aloud after Uncle Mick had finished a most horrible yarn, “sure I’ll tell the lads a more gentle tale”. He paused as he lit his pipe and began puffing the smoke towards the chimney. We of course sat as if transfixed in anticipation for most of Granddad’s stories told of beauty, love and magic with not a trace of horror…

“If you all stay as quite as mice, I’ll tell you about the Oillipheist” he began. “He was a bloody huge animal with a body like an enormous snake and with a head of a dragon that could breathe flame and smoke. Sure now, he must have been over fifty feet long and weighed at least a couple of tons”.

He paused and looked around as if someone was listening from outside the front door. ‘Oh Lord‘ I thought to myself ‘I better be careful because I think this might be a little bit of a horror story after all’. As usual, Granddad must have guessed what I was thinking, then added “There’s no need to be frightened Mick, sure ‘tis a lovely story”.

“Anyway” he continued, “Who can tell me when Saint Patrick came to Ireland?” Both Ger and Jackie came out with the reply “432” – whilst I did not have the slightest idea. “And what was he famous for besides the religious things he did?” Granddad again asked. “Snakes” Jackie shouted, “He got rid of all the snakes out of Ireland”. Personally I had never heard about that but Jackie was the one who knew all the gory bits about such things.

“Bebob now Jack, sure you’re dead right” Granddad congratulated Jackie. He puffed on his pipe then continued. “And like I said, when his holiness Patrick heard of this big fellow swimming around in the river Shannon, sure didn’t he say to himself ‘Arrah now, sure I’ll not leave that so-and-so to spoil everything’. He did nothing more but leave the church he was building in County Clare and head straight for the river just above the town of Limerick”.

Granddad relit his pipe and looked around the dim-lit room. He cocked his head towards the door and window as if listening for someone or something… I moved further into the alcove where I was sitting whilst Granny Gorman stoked the fire.

“Now sure wasn’t the old Oillipheist a clever and wise old bugger and realized what Patrick was going to do. He moved into the shallow water by the river’s edge and waited patiently for the good man to arrive”. Once again Granddad cocked his head towards the door and window. I was getting a little nervous…

“Now guess what happened next?” Granddad asked. I did not have the faintest idea but hoped beyond hope that St. Patrick would not arrive and be eaten. Again Granddad read my mind and continued “No, not that. He just waited and waited for you see it was a long walk for the holy man to get from Clare to Limerick. Anyway, now wasn’t there a famous bagpipe player in the town called Seaneen O’Rourke. When I say he was a famous player I mean it, but only when he was sober and sure didn’t he have the curse of the drink upon him. He had been on the poteen whiskey for the best part of a week and was as drunk as a lord. He insisted on playing his bagpipes but after some very deadly threats from his neighbours, he made his way down to the river. Lo and behold, sure now didn’t he choose the river bank exactly close to where the Oillipheist was waiting for Patrick”.

Jackie was getting impatient to hear the gruesome bit that was expected and called out “Go on Granddad, tell us what happened. Was he gobbled up by the snake?”

“Hold your whist now Jackie and I’ll tell you. O’Rourke began playing his pipes and it sounded like half-a-dozen cats being skinned. It was horrible and sounded more like a banshee screeching than music”. ‘Oh lord’ I said to myself, ‘here we go – I knew there were ghosts’.

However, Granddad continued, “His music was so bad that the Oillipheist had enough after five minutes. He did nothing more than slither up onto the bank and swallowed O’Rourke, his bagpipes and his bottle of poteen all in one big gulp”. He then slid back into the water.

“Seaneen O’Rourke was so drunk that he did not know where on earth he now was but on account of the drink he was not worried in the slightest” Granddad continued, picking up the pace of the story. “He took a couple of more swigs of his whiskey and began to play the pipes again as badly as before. Well now, let me tell you” Granddad paused “the poor animal could stand it no more; he slithered back up onto the river bank and threw-up O’Rourke and everything with him. At the precise same time, who do you think should arrive on the scene but Saint Patrick himself”? Granddad paused to light his pipe once more then continued his story.

“Begone from these shores ordered Patrick and waved his staff at the evil serpent, begone from these shores forever” Granddad used a deep voice to tell this part of the story as if he was imitating Saint Patrick. “With that” he added “the snake grew a set of wings and breathing smoke and flames from his mouth flew up into the clouds never to be seen in fair Ireland ever again”. That was it I thought, I managed to stay calm for most of the story which I now believed to be over…

Once again, and I never figured out how Granddad managed to do it, he read my mind and added “Not quite Mick, you see, he only flew away a few hundred miles and landed in a lake in Scotland, sure isn’t the lake called Lough Ness and the snake called the Lough Ness Monster”…

Mike brings us a “Down the Country” tale of St. Patrick and a snake.

Rebel Without a Pause