The Benefits of a Zombie Apocalypse 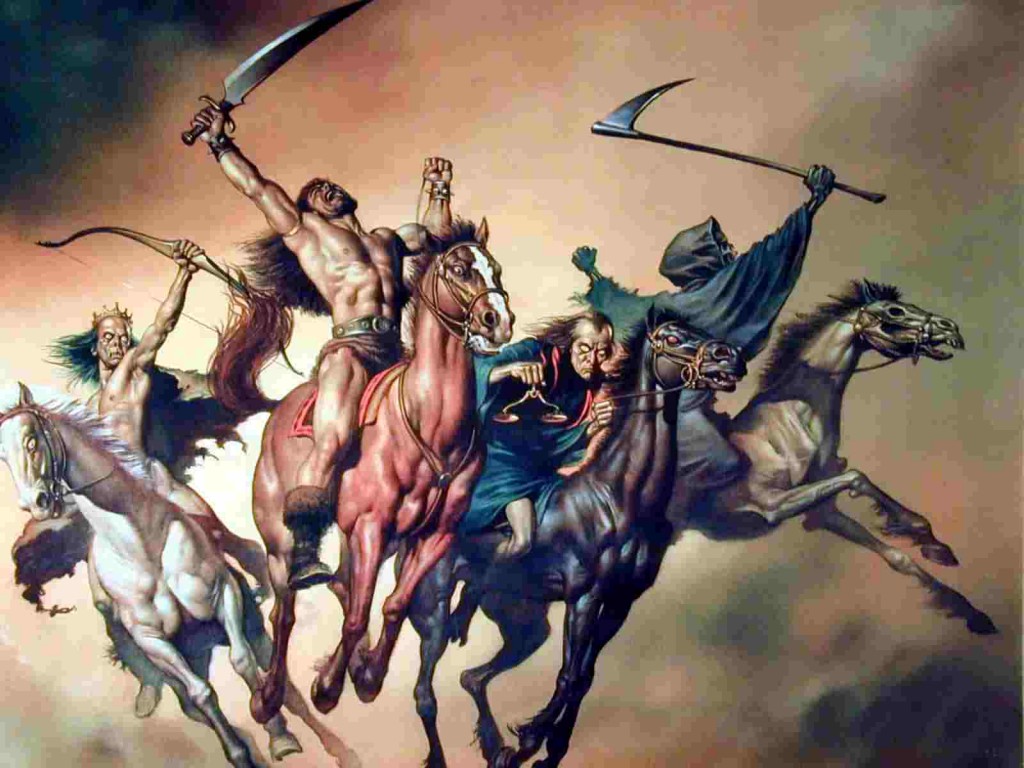 Yes folks, you read that right – not every aspect of an undead plague is doom and gloom.  Sure, lots of people will die and civilization as we know it will crumble (that’s something of a given) but few ponder the *positive* aspects of such an event should it occur.

Well, that’s what this piece is all about – exploring the world of possibilities that would open up in the event of such a plague being unleashed upon the small, fragile world of modern humans: a zombie apocalypse would – in the long run – contribute to the overall health of the biosphere, cull the weakest members of the human species and open up new frontiers for the survivors of the plague to explore and claim as their own.

As anyone who’s been paying attention the last few decades can tell you, this planet has experienced a population explosion – right now earth is approaching the 7 billion mark in terms of total homo sapiens inhabiting this world.  The phenomena that made this population explosion possible was the exploitation of fossil fuels in agriculture: particularly the use of farming machinery to replace livestock and petrochemical-based fertilizers – without these, it would be impossible to keep so many people fed at even subsistence levels.

Of course, with peak oil coming in the next decade or so, maintaining such a population will no longer be possible before we hit 2030 – at which point there will be a massive die-off and no chance whatsoever for anyone to have access to the goods that oil makes possible (particularly plastics, petrochemical-based medicines or gasoline).  But what if this could be headed off somehow: perhaps by an infectious disease that spreads rapidly through contact with bodily fluids – a contagion that *compels* those under its influence to infect as many hosts as possible? 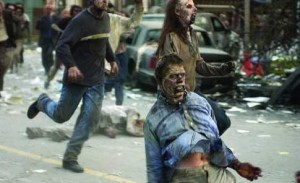 Enter the zombie plague – such a disease would be all but uncontrollable once released into the general public and capable of completely destroying civilizations if not contained in the early stages of an outbreak.  Within a matter of hours whole cities can be purged of sentient monkeys, and within days it can go global: ridding the world of over 90% of the homo sapien parasites living on earth!

The fewer people there are on the planet, the further the planet’s resources can be stretched without being strained – the demand for such goods as lumber will plummet (as no one will need to build a house for a long time – just clear out the dead and move into the neighbors place for shelter), gasoline will become readily available to anyone (just get a hose and start siphoning it from the victim’s cars or, if you got the equipment, pump it out from under your local gas station) and the need for oil refineries will disappear overnight (as there will be more than enough gas to last the survivors until they come up with alternative power sources).  Furthermore, the need for ridiculous levels of food production will vanish: fewer people means fewer mouths to feed – and supporting a small population with modern farming technology (such as tractors and harvesting combines) on a local scale would ensure that no one would ever need to go hungry again!

Since smaller populations mean less demand for natural resources, there’s less strain placed on the earth to maintain them – which in turn grants more resources to the planets thousands of species of non-human life forms that have been pushed to the edge of extinction by human activities: with the homo sapien cancer finally in remission, the biosphere will be allowed to recover on its own terms – free from the interference of mankind.

Of course, there will be zombies running around and that would make the activities described above more difficult than they otherwise would be, but if the survivors learn the appropriate combat skills to keep the walking dead at bay they will be able to support small communities with minimal risk to their own persons.  And besides, since zombies are rotting away from the moment they rise from the grave, this state of affairs should only last a couple years at most: at that point, most of the zombies infected in the initial outbreak will have decayed to the point where they pose little or no threat to the living (even the undead don’t “live” forever, you know…).  At any rate, walking corpses pose little threat to a healthy, stalwart population. 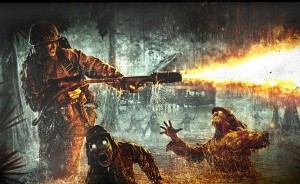 Which brings me to my next point…

Tell me, just how many of the 7 billion or so sentient monkeys running around today know how to fend for themselves outside the context of this artificial environment that was built for them by the powers that be?  How many people know how to kill and skin a rabbit, build a fire with primitive methods, find their way around in the woods without a map or defend themselves from a predator?  Few among modern men can claim such skills.

The reason for this?  The culture of convenience most people have been born into – modern man does not hunt or forage for his meals, he gets them at the supermarket; he does not build fires to keep himself warm at night, he turns up his thermostat when he gets “a little chilly;” he does not navigate rugged country, he travels paved roads; he does not fight a predator that has come to kill him, he hides in a closet and dials 911 for help whenever danger comes to his doorstep.  By and large, modern man is a pathetic lot.

(Note: by no means I’m  saying “don’t go to grocery stores” or “don’t use air conditioning” or any such thing – what I’m saying is that the modern man has lost the ability to survive *without* such things at his beck and call [although I do regard people who dial 911 whenever they see shadows move in the night as weaklings…].)

The zombie apocalypse will strip away all of the trappings modern man is accustomed to – no more grocery stores, satellite navigation, phones with over 500 apps or anything else that he takes for granted.  For the first time since the information age began, modern humans will be forced to stop watching TV and start living life!  The softest and weakest of the lot (particularly politicians, corporate executives, bankers and other members of society’s elite) will certainly wind up casualties of this mass extinction event: those who somehow manage not to get eaten by undead cannibals will not have the necessary skills to survive apart from the social order they built (they never acquired them and would have a very difficult time trying to learn them on the go due to the fact that they never did so much as a solid day’s work in their lives – they know nothing of discipline, persistence or physical stamina due to their pampered lifestyles).

Without the human vermin described above, the majority of the population will be left rudderless and adrift in this strange, new world – since the average person is used to other people handling crisis situations (thanks in large part to general society’s “911” conditioning), most people will follow blindly whatever dictates come to them from “official” sources and get themselves killed in places the TV tells them to seek refuge at.  Only those who are prepared for a major crisis and act as autonomous entities will make it out of the zombie apocalypse alive: and these are the ones that will inherit what’s left of the world – the “fittest” of the species.

Which now brings me to my third point… 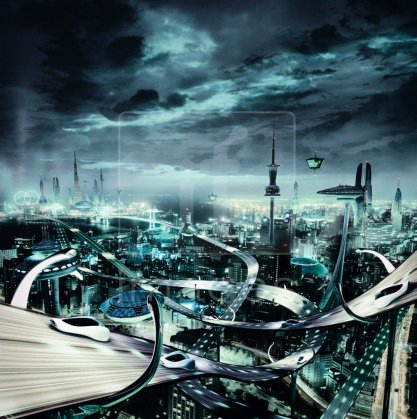 With the weaker elements culled and the globe depopulated all sorts of new opportunities will open up for the survivors – both physically and socially.

On the physical level, all those lands that were once claimed by state powers, corporate entities and other incorporeal beings will be vacant and ripe for the claiming!  Anyone with the manpower and weaponry can lay claim to prime real estate that once only belonged to the “upper crust” of the order, take over entire towns that were once subsidiaries of major business tycoons and strip state-backed military bases of the weapons once used to repress them to ward off the zombies and rival human groups.  Everything that was once the property of some other force would be open for anyone to come over and claim by sheer force of will!

On the social level, the destruction of the prevailing modes of government and commerce opens new niches to be filled by those with the ability to fill them – agro-industry would likely be replaced with localized farming controlled directly by those that work the land, mega stores would be replaced by specialty shops that cater primarily to essentials (Joe’s cobblers instead of Ross or Payless; Sue’s bakery instead of Little Debbie or Sara Lee in grocery stores; Mario’s tool shed instead of Home Depot or Lowe’s; etc…) and the demise of the banks will render all currency useless (meaning the barter system will come back in style).  Also, with states out of the way, communities would be 100% self-governing: the local residents will decide for themselves what general rules and guidelines they want their community to follow, as well as act in the capacity of their community’s own line of defense (no more “law” enforcement or standing armies – the individual enforces his own will and defends his own claims).

In addition to the rise of small communities as these, roving clans of survivalists will pop up to take advantage of the lack of order in the wake of a collapsed civilization – tribes of hardcore hunters and scavengers will arise to procure the material goods left behind by the deceased.  Traveling in packs, these folks will know who to survive off the land when away from the ruins of civilization as well as clear areas of the walking dead so that they might mine the debris for treasures they can use themselves or else trade with other communities of survivors: these are the kind of people that live by their own rules of conduct and won’t have a sedentary lifestyle imposed upon them – sure they face the dangers of the undead more than the others would, but they would be the equivalent of the modern man’s biker gangs in this new world and welcome the danger with open arms like the bad asses they are.

In summary, a zombie apocalypse isn’t the end of the world so much as it is the beginning of a new one – one that a lot more raw, primal and a lot less convoluted than the construct modern man has locked himself into.  The death of the old order creates chaos: and chaos is what makes the birth of a brand new mode of existence possible.

I don’t know about you guys, but I’m very much *hoping* for such an event to give us all a much-needed rebirth – who’s with me?

How to Exorcise Your Movie Set