Sharing A Tent In Freedom Plaza-Dispactches from D.C. 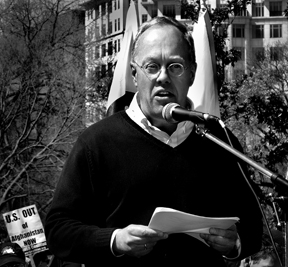 While he read an article which I’ve quoted in the past, I’ve never heard him speak. Most of you know that he’s one of my favorite authors. “Either you are a rebel, or a slave,” he said – and he is right. We each have the opportunity, here and now, to make a difference. What I’ve (re)learned here this week is that if we make that difference by serving those who are on the front lines, or by standing a watch ourselves, we no longer have a choice in the matter – we’ll either be a part of change, or we’ll stand by and watch things go to hell around us, with any number of excuses why we didn’t try to make this a better country or a better world.

They’ve asked us to double-up if we have a ‘private’ tent, as it’s going to rain today. I accepted that challenge, and was rewarded last night with the company of Tim, a member of Veterans For Peace and a survivor of the Vietnam conflict. “I wish you’d’ve been stuck with a beautiful girl,” I said as I shook his hand. “At my age, I don’t know what I’d do with one.” We laughed. He’s from New York. I have an idea we’ll become pretty good friends. That’s the thing about this place – while I’m certain there are more than a few cops in the crowd (there’s a rumor that the incident at the Air and Space Museum was actually started by a provocateur), most of us seem to know the genuine article.

For all of this, I’m wondering if we’ll actually be able to accomplish anything. The authorities have co-opted any real confrontation by giving us a permit through February, and they seem to be amenable to us camping here as long as we don’t leave the perimeter.

Perhaps this is what they wanted all along. It’s cheaper to let us use the Plaza than it is to house us in jail; as long as others keep feeding us (there appears to be plenty of free food and drink about), they don’t have to do that, either.

The real question is whether this will grow. I clearly remember being sixteen and wanting to join the protest against Vietnam in 1970, when it seemed the numbers filled the mall and surrounding streets (I don’t know the numbers, but they’re obviously far more than here).

The media seem to believe (again; from what I’ve heard and read from newspapers about the Plaza) that this is a party; that the people who are here don’t have anything better to do than cash their unemployment checks and camp out on the government’s dime. The single greatest thing anyone can do is to spread the word that this is not the case.

I still think about the sign that woman has – “You Killed My Son”. Damn anyone who says she ‘doesn’t have anything better to do.’

From where I sit, this will end one of three ways – either there really is mass apathy in America, and this crowd will gradually drift apart sometime between now and February; that there isn’t apathy in America, and this movement, along with the others, will grow – or there will be a spark either on the left or the right, which will start the kind of human conflict which usually causes real change.

As I mentioned a bit ago, somewhere, someone is thinking. That person could be a disgruntled Army general, who’s all but ready to drive across the Potomac with a few of his buddies to make an end-run around the Constitution; an unemployed steelworker who’s tired of beans in the homeless shelter, or a student who’s tired of unpaid student loans and no job.

Increasingly, I think there’s a high order likelihood that one of these people – or perhaps all of them – will act. When that happens, it’s anyone’s game.

The other day, some folks marched on a Senate office building and got themselves arrested. Me? If I’m going anywhere, it’ll be if some of these folks grow some passion and balls and march to Congress. Frankly, unless we’re dictating terms there, we won’t have a chance.

It’ll also take more of us. A whole lot more.

by W.D. Noble October 12th, 2011 Occupied Washington, D.C. Last night, I heard Chris Hedges speak. While he read an article which I’ve quoted in the past, I’ve never heard him speak. Most of you know that he’s one of my favorite authors. “Either you are a rebel, or a slave,” he said – and…

The Northwest Passage to Riches and War