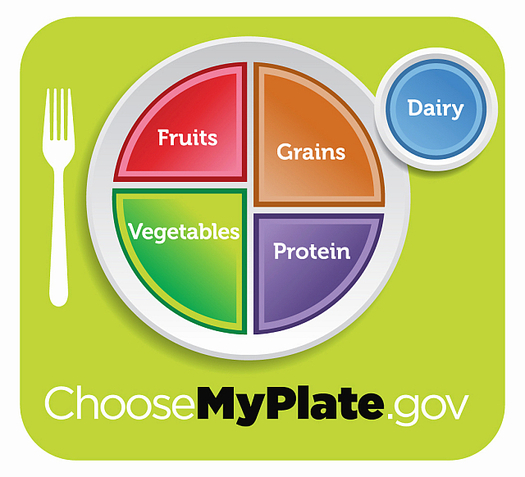 This week the United States Federal government introduced a new icon for those who are masticularly challenged.  Replacing the 20-something year old pyramid is a plate.  It looks a little like eating for dummies.

But this is nothing new. The U.S. government has been pumping out their recommendations as to how its people should be eating since its inception.  Early presidents like John Adams were known to publish papers on newly found agricultural products and their effectiveness in treating health problems.  The early government was involved with sending out agricultural researchers to find new plants, trees and food sources for the American people.  Once found and established either here or
with trade agreements, chefs were hired to create recipes to appeal to the American palate.

The U.S. Department of Agriculture (USDA) published its first dietary recommendations to the nation in 1894. Soon after that, in 1916, the first food guide, called Food For Young Children was published. Caroline Hunt, a nutritionist and the author, divided food into 5 groups: milk/meat, cereals, vegetables/fruits, fats/fatty foods, and sugars/sugary foods.

In 1941, President Franklin Roosevelt called a National Nutrition Conference which came up with Recommended Dietary Allowances (RDA’s) for Americans to follow. RDA’s specified caloric intake as well as essential nutrients. Also, the USDA
announced the “Basic Seven” in 1943, which was a special modification of the nutritional guidelines to help people deal with the shortage of food supplies during the war. It should be noted that this conference however was more concerned with making sure Americans got enough calories an altogether different issue from what it seems the government is concerned with today.

It seems that the federal government has decided to go with ‘eating for dummies’ as the highlight of the change most frequently mentioned is its ease.  Professor JOHN STANTON (Chairman, Department of Food Marketing, St. Joseph’s University): I
think the pyramid was just too complex. And can you think of a busy mother trying to put delicious, nutritious food on the table looking at a pyramid

At first it’s hard to imagine that the mums of the U.S. can’t keep in their heads the different components of nutrition.  In fact it’s almost insulting.  However maybe it’s true because the plate plan is being widely applauded.

It’s no secret what’s behind this newest nutritional recommendation.  Michelle Obama has been on almost every talk show bragging about her vegetable garden at the White House.  The garden supposedly feeds the Obama family as well as heads of state and special guests.  In fact you may be hard pressed to find an interview with the first Lady in which she doesn’t appear in the garden.  The President himself took a jab at her at the correspondents’ dinner stating she was snatching candy out of kids’ hands and mouths at the annual White House Easter egg hunt.

It’s not that Mrs. Obama’s push for fresh produce is a misplaced one.  Americans get far less fruits and vegetables than they should and obesity, especially childhood obesity is terrifyingly ridiculous in the U.S. just now.

However it is far easier to plant a vegetable garden on the grounds of the White House than it is to get actual fresh healthy food into the average American.  There are several unaddressed reasons for this.

First, the cost of produce has increased just like everything else.  At the same time as we all are painfully aware; the national median income has decreased.  Where it used to be far less expensive to feed families with a vegetable based diet, it has now become cheaper to subsist on starchy calories.  Things like rice, pasta etc. are far cheaper to buy and easier to stretch.  In fact frozen dinners are a lot of the time cheaper to buy than fresh produce, particularly in areas of the country where agriculture is not a predominant way of life.

Also contributing to the price increase of produce is the nuevo gourmet movement to use fresher local food.  While this certainly highlights vegetables and fruits, it also drives up the prices as restaurants and the trendy bourgeois can and will
pay higher prices for their food and in turn pass those prices on to customers.

Of course people can always grow their own vegetable garden; however government subsidies like food stamps do not pay for plants or seeds, whereas they do pay for Tombstone pizzas and Macaroni & Cheese.

While it seems like the federal government has good nutritional intentions for its people in suggesting how they eat it is
important to remember our government is run by lobbies. It should not escape attention that the agricultural community gains from these changes.  In fact, labels and ads are already changing to reflect this.  Marketing the Plate is going to be big business and will give agriculture a boost.  Not that this is necessarily a bad thing.  Zucchini and brussel sprout farmers probably
have not been giant money makers.

But why should we listen to the government when it comes to matters of healthy eating?  Particularly when they have been notoriously wrong in their recommendations. Public-health officials have long been eager to issue nutrition advice ungrounded in science, they tend to sweep away any conflicting evidence in regards to nutrition making recommendations that can be harmful to the public, environment and some people believe even contributing to obesity.

Take for example the current campaign to push corn-based sweeteners.  The party line being that sugar is sugar.  However, this is not exactly so.  Corn itself is difficult for the human body to digest.  It bonds more closely with our fat cells than sugar cane or even sugar from beets.   Extracting sugar from corn is an environmentally unfriendly process not to mention the fact that farming corn the way we currently do it is rough on the land, stripping nutrients from the soil leaving land that is unusable.  But, the corn growing industry is huge and has put a lot of money into Capitol Hill.

Then there is the issue of decreasing proteins and fats in our diet.  While saturated fats are clearly bad for us, our bodies need both fats and proteins to function correctly.  Fats are what form myelin, the protective sheath that covers communicating neurons. Myelin is composed of 30% protein and 70% fat. Without enough our brain ceases to function correctly, it is unable to transmit information.  Also it is unable to make repairs to itself when interruption occurs.  To a lesser extent this also affects other major organs like the heart.

Edward Ahrens, an expert in the chemistry of fatty substances at Rockefeller University, characterized past government guidelines as “simplistic and a promoter of false hopes” and complained that they treated the population as “a homogenous group of [laboratory] rats while ignoring the wide variation” in individual diet and blood chemistry. The Food and Nutrition Board of the National Academy of Sciences released its own dietary suggestions, which saw “no reason for the average healthy American to restrict consumption of cholesterol, or reduce fat intake,” and just encouraged people to keep their weight within a normal range.

In fact some clinical studies are concluding “it now seems that the U.S. dietary guidelines recommending fat restriction might have worsened rather than helped the obesity epidemic and, by so doing, possibly laid the groundwork for a future increase in CVD,” cardiovascular disease.

Like so many other guidelines issued by our federal government, the current plate fails to take into account individuality.  It
doesn’t separate men from women in its recommendations.  Nor does it separate children from adults.  Individuals with different metabolisms, health problems and daily activity levels are going to have different nutritional needs.  Instead of making
fancy graphics that charm parents into graphing out their family’s plates the USDA would do better to help make fresh food more accessible  and affordable to people.

Grainne Rhuad- This week the United States Federal government introduced a new icon for those who are masticularly challenged. Replacing the 20-something year old pyramid is a plate. It looks a little like eating for dummies.