Miracle in the Wilderness 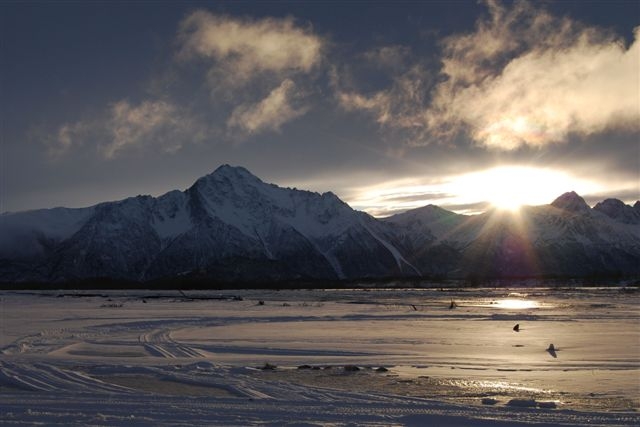 A seven year old doesn’t understand very much.  Seven year olds understand quickly not to put their tongues on the frozen monkey bars, that mud puddles are wonderful and cookie dough is better than baked cookies, but they don’t understand things like economics, the limits of their parents abilities to make everything right; or death.  I was seven years old when we received the news that grandmother had died.  That was to say, the grandmother I had never met because she lived in Idaho and had never come to visit us in Alaska.  The grandmother that made my mama cry when she received the news.

I couldn’t tell you the day this happened, how long it took to prepare for the trip to attend the funeral, or how long we stayed.  The memories are all fuzzy and run together.  It was winter, and dad fretted about driving through the Northwest Territory in hazardous conditions, but we made it to Idaho safely enough.  I remember a lot of sadness, dark rooms and grown ups standing around in groups, not very pleased to see children playing.  I remember that mama was much quieter than usual on the journey home, primarily crooning over my younger sister, who was a baby at the time and who she rocked continuously in her arms.

In Edmonton, we stopped at a dime store, and dad let us each choose a cheap toy to keep us occupied on the way home.  I chose a cardboard, put together castle with a set of plastic soldiers and horses.  I played cheerfully enough with them as we climbed into the thick, snowy masses of the Alaska range, with its tall, frightening peaks.  For a short while, my little cardboard village became my whole world, with its tiny houses, stair cases, stables and gates.  We were trying to get home before Christmas however.  Dad fretted about being on a very short schedule, and one problem after another kept popping up; a flat tire, an over-worked engine that needed some tuning, blizzard conditions that kept us waiting for the roads to clear.

Dad nearly always wore a serious face, but this time his face began to look grim.  Shrugging off advice, he began to press for more hours behind the wheel; hours that carried him  into a late evening storm. The visibility was near zero and a wind raged around and tugged at the car, but his determination had seized him.  Cresting a particularly steep hill, he began a very slippery descent down, when it happened.  The car slid out of control and hit the bridge at the bottom.  There was nothing more we could do.  We would have to wait for help.

The next morning was clear, but there was absolutely no traffic.  We had spent the night bundled under as many blankets and coats as we could find, while dad periodically started and cut off the engine to maintain a semblance of heat.  By morning however, our gas was running low and he began looking for a means of keeping a fire.  Gathering some of the twigs and branches poking out of the snow, he tried to light them, but they were too wet.  He needed paper.  We rifled through the glove box, hand bags, luggage, collecting whatever paper we could find, and adding them under the tee pee made from sticks.  The fire sputtered and popped, but still went out.  In another round, we added the blank pages of a notebook.  The fire smoldered but didn’t burst into flames.  A sacrifice had to be made.  Tears rolling down my cheeks, I surrendered my cardboard castle.  I sobbed as the brutalized remains of my little houses, gates, stairways and stable were added to the fuel, but the sticks burst into flames.  Dad could now add others, a twig at a time, feeding the fire gently so it wouldn’t get too wet.

“I’ll buy you another when we get home,” he promised and I nodded, but somehow I knew he’d never find another replacement for my cardboard castle.  With all the nobility of thought a child can muster, I told myself it didn’t matter; we were warm; or at least as warm as a fire and the shelter of a car could make us.  I had my plastic soldiers and horses.  It had to be enough.

Sometime during that frigid day, a snow plow came up over the hill and trundled down toward the bridge, pushing the evening’s snow flurries out of the way.  When the driver saw us, he stopped.  He piled as many of us into the truck as could fit into the cab, and put the rest in the back along with the luggage, blankets and coats.  We were carried to a log cabin home where we thawed out in front of a brightly blazing fireplace and were given soup and biscuits.  A wrecker was called and the car towed to a shop.  It took a few days to put it back into shape, then we were on the road again.

It was the quietest I ever remember the family being on a long drive.  Mama sighed once and said, “at least we’ll be home for Christmas.”

“There will be no Christmas,” dad answered vehemently.  “I’m out of money.  I emptied everything out of the bank to fix this car and buy gas.  We have nothing to spare.”

“Santa Claus will bring us something,” I ventured to say.

“Not this year,” he answered, and he was no longer just dad, but my father; stern, uncompromising, driving us to our feet no matter how often we fell down. 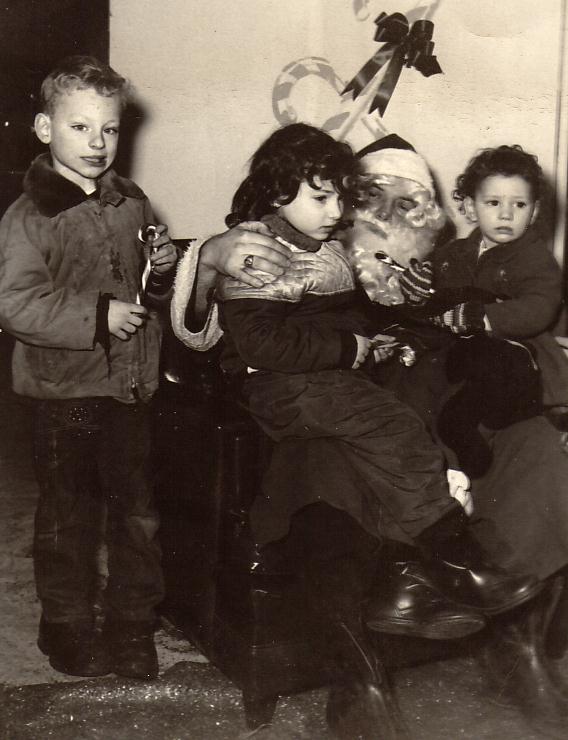 The rest of the trip wasn’t much fun at all.  We bought a loaf of bread and some pork and beans when the food basket donated to us by our kindly hosts ran out.  We were instructed to make it last until we got home.  We nibbled at our pork and bean sandwiches, making them last as long as possible and refraining from asking more until our stomachs truly grumbled with pain.

It was late evening when we finally made it to our little community.  Along the way, we’d seen houses lit with Christmas lights, brightly twinkling trees inside, warm and cheerful against a swirling landscape of snow and ice.  Our house looked small, dark and sad.  The neighbors had attended to it during our absence, feeding the animals, checking the furnace that had been kept at just high enough flame to keep everything from freezing.  We huddled just inside the door until dad turned up the furnace.  The blast of warm air was welcoming.  We were tired, hungry and cold, so miserable nobody turned on the lights right away.  We went into the living room as a solid mass, struggling along with our suitcases, and sitting down wearily in our chairs.

It was Christmas Eve.  Tomorrow, other children would be opening presents with shouts of joy.  They would be spoiling their appetites with candy and singing Christmas songs to their crackling radios.  They would be happy.  We should be happy.  We got home alive, but somehow, that didn’t seem to be a fantastic bargain to a seven year old.  My survival I had never really questioned, but I had some serious issues to bring up with Santa Claus. 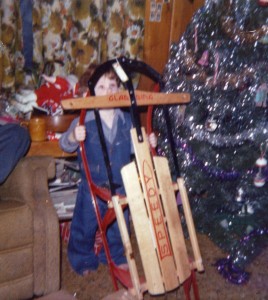 It’s a little amazing we didn’t notice anything different right away.  Maybe it was the cold, the dark, the general unhappiness, but it was several minutes before we noticed a stack of cardboard boxes at one end of the table.  Mama saw them first.  She was on her way to the kitchen to make some hot chocolate when she noticed these silent intruders that had not been there when we left.  “What’s this?”  She asked.

“I don’t know,” dad answered, equally puzzled.  Finding no notes or written explanations on the side of the boxes, he ventured to look inside one.  There he found home cooked dishes, wrapped carefully in tin foil, cookies, fudge and popcorn balls.  Inside another were cheerfully wrapped gifts, all with name tags.

They set these anonymous blessings one by one out onto the table.  Each item seemed to glow with a special, golden spirit.  “I guess there is a Santa Claus,” said mama, glancing at dad as though she had won something.

I was seven years old and Santa Claus was one of my understandings.  Of course he wouldn’t let us down.  He was a kindly man with a twinkle in his eye and a genuine love for children.  After all we’d been through, would he really wish to break our hearts further?

It was several years later before I began to admit to myself that the mysterious gifts were the generosity of our neighbors.  Santa Claus had long since been placed on the same imaginative shelf with soldiers, horses and castles.  Mud puddles had given way to jars of tadpoles, winter dreams twirled around frozen lakes in ice skates.  I poised the day between the harsh reality of our hazardous journey and magic.  I still do.  Our gifts didn’t arrive out of thin air, but the miracle did.  The miracle sheltered us from exposure, brought us safely home and laid before us an act of kindness.  The miracle was created by will power, by strength, by belief.  The magic was created by love.

Karla Fetrow: There will be no Christmas. I’m out of money. I emptied everything out of the bank to fix this car and buy gas. We have nothing to spare.