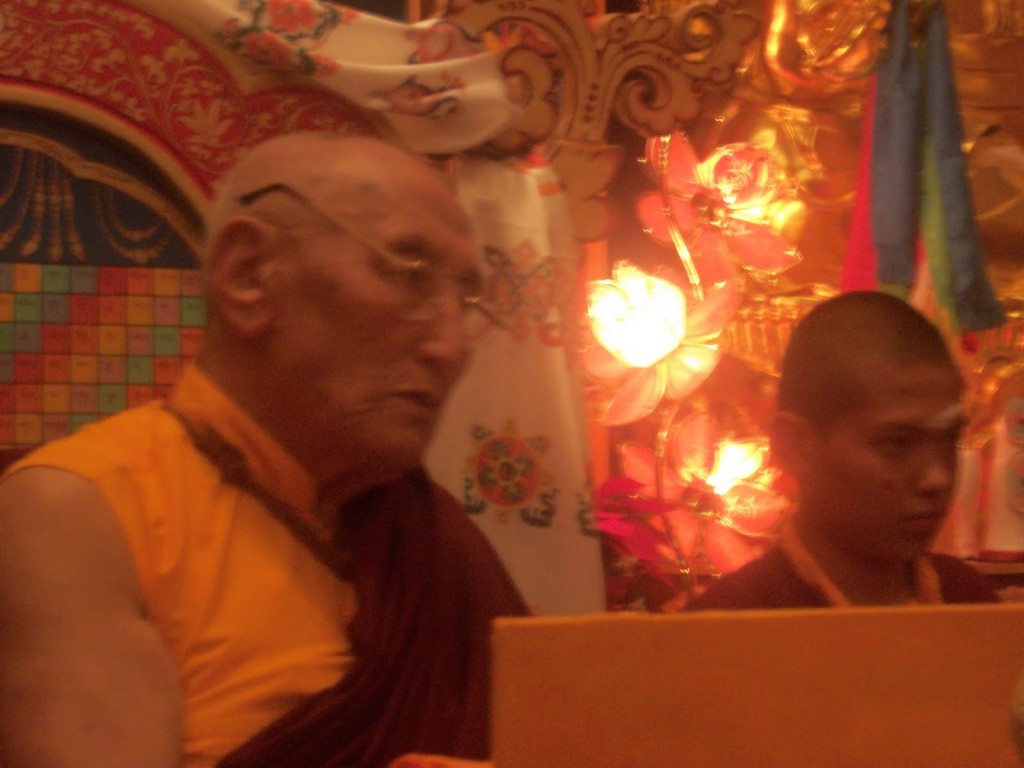 The Most Important Question There Is

On the day that you die (and everybody does finally die, you can count on that), will you be able to look back on your life and be proud?  You know that old saying, “Life is a competition and the winners are the ones who do the most good deeds”?  Well.  They’re not talking about how much money you’ve made or how many trophy husbands or wives that you’ve had or even how many times you have bombed Iraq or tried to set up Julian Assange.

And you will not even be allowed to count all those tax breaks you have given out to the rich.

In order to win the life-competition, you gotta be able to look yourself in the eye and say, “I helped those less fortunate than me.”  If you can’t do that, nothing else counts.  Every religion on earth worth its salt teaches us that — and they even sometimes actually practice what they preach.

I just met a man who I am totally positive will be able to look back on his life with absolutely no regrets.  His name is Yangthan Rinpoche.  He’s 80 years old.  He was born in Tibet and is one of the last of those Old Skool lamas that were trained there before the Communist Chinese overran Tibet in 1959.  You have NO idea what this man has gone through during his life — and yet he is still both hopeful and kind.  No one who has met him can imagine Yangthan Rinpoche even thinking about giving orders to fly deadly drones over happy wedding parties in Afghanistan. 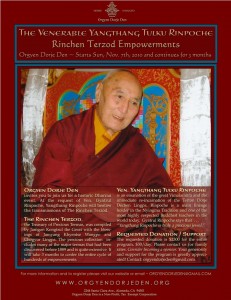 Here’s what Google says about this man:  “In 1959, when the Communist Chinese invaded Tibet, Yangthang Rinpoche fled Dhomang. He was later captured by the Chinese, and imprisoned for 22 years. He helped many fellow prisoners who could not bear the hardship to die peacefully by performing Phowa, transferring their consciousness to Pure Lands.  Though he witnessed and experienced much torture, he bears no resentment to his captors, only compassion. In fact, he became a spiritual adviser to some of the guards.”

Good grief and crap on a cracker!  How many of us could even survive 22 years of torture, let alone come out of that nightmare feeling all compassionate and forgiving?  Not me!  I’m still totally pissed off at one of my daughters just because I don’t like her.   Hey, at least she hasn’t pulled out any of my fingernails or forced me to live on stone soup for 22 years!

Anyway, Yangthang Rinpoche is currently conducting three whole months’ worth of Tibetan Buddhist liturgies out in Alameda, CA — of all places.  This series of liturgies, called wangs in Tibetan, will continue until February 15, 2011, are open to the public, cost $30 a day and entail receiving over 550 separate empowerments.  This is an amazing event, usually only performed every five or ten years in mountaintop monasteries in Bhutan or something.  http://www.orgyendorjeden.org/rinchen_terzod.html

But enough of the commercials.

I’ve been to several of these liturgies in the past week and what can I say?  Here’s a 80-year-old man who is not only able but willing to spend five or six hours a day for the next three months chanting a whole bunch of stuff which he believes with all his heart will bring peace to the world.

That’s what this great man has been doing with his life. 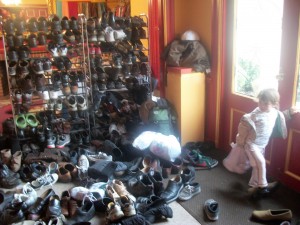 Speaking of great men, I always thought that Santa Claus was also a great man.  And, apparently, Santa Claus will be coming to Berkeley on December 22.  And not only that, but my three-year-old granddaughter Mena has become pretty much nutzo about Christmas tree lights lately.  So here’s a sort-of secular list of places in the San Francisco Bay Area where you can go to see Santa and/or get your twinkle-light fix taken care of:

— There used to be a Dickens Faire every year in San Francisco and then they stopped doing it.  And now they are doing it again!  Hurray.  The Dickens Faire is totally cool. http://www.dickensfair.com/

— Apparently they light up the Oakland Zoo every night in December.  http://sf.funcheap.com/123-zoolights-oakland/ and http://www.oaklandzoo.org/news/press-releases/zoolights/ We just gotta do this!

—  Sunol has a whole Christmas train full of lights: http://www.ncry.org/tol_10.htm

— Then there’s Ardenwood farm but I think that event is now over for the year.  Next year?

— And there’s always my daughter Ashley’s Christmas tree — plus she doesn’t even charge admission.

— Historic Dunsmuir House in Oakland goes all-out with their lights and decorations every year — no holds barred. http://www.dunsmuir.org/calendar_holiday09.html

—  And Santa will be at Frances Albrier Park on December 22, from 11 am to 1 pm in South Berkeley, 2800 Park Street.  “Tots will come meet and greet Santa before he zooms away on his sleigh! Visit Santa and receive a gift.  There will be snacks, fun, and holiday cheer for everyone!”

Jane Stillwater: Here’s an 80-year-old man who is not only able but willing to spend five or six hours a day chanting what he believes will bring peace to the world.

The Drunken Moose Chronicles of Talkeetna

The Rebirth of Railway Romance