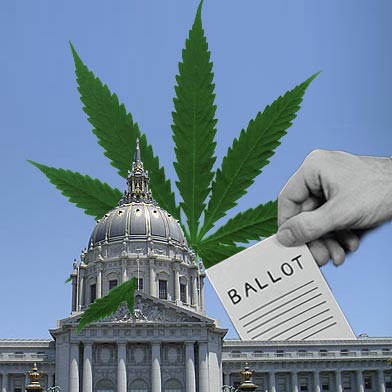 Proposition 19 as many of you know is the prop. that would have made the use, growth and possession of weed legal in California.

It obviously didn’t pass, which in truth is a bit of a surprise to most Californians.  It was hugely popular, people know that everyone is smoking pot and the tax revenue was highly touted.

However in reading the proposition there is much to be found that didn’t make its way to main stream news.  It was poorly written and although on the surface looks like it adds protection and rights, this proposition had it been made into law, really provided a lot of places where everyday folks can be penalized and face jail time for nothing.

First off, this prop. provided for individuals over 21 to grow plants on their own property, not rentals, a 5′ X 5′ foot patch of mary jane. To put this in perspective a typical 5’X5′ garden bed can manage 3 tomatoes with some inter-planting of onions and lettuce. As anyone who has ever grown weed knows this is not enough for a year’s supply for a household that say…has 2 or 3 adults using the product, not to mention friends that come over. Pot is a social thing. There would have been in place fees, citations and ultimate arrests for anyone going over the 5’X5′ limit. That’s where the revenue comes in.

Unlike tobacco; marijuana would not be sold in smoke shops, stores, etc. It would be relegated to specially licensed shops that the cities and townships could control in terms of business hours, signage and placement. There were huge spaces for wiggle room to slap a citation on such shops (generating more income) at the whim of law enforcement. In addition these co-ops would be difficult to run as their suppliers which are traditionally home-growers would be limited and corporate growers would charge more.

There was nothing in there about how to deal with work site cannabis use. Unlike alcohol, you cannot test for it and get immediate results. A positive on cannabis shows up weeks and sometimes months after use. Many contracts in our state depend on a drug free certification for their money. However with no way to reliably test if someone smoked cannabis in the morning or last week, they wouldn’t pass this certification and they would not be able to fire anyone as smoking cannabis would be considered a right. Also there is the safety issue; forklifts, heavy equipment, etc. simply shouldn’t be used when someone is high. But the job loss due to loss of contracts is most concerning in a state that is suffering a budget crisis.

There is also the driving issue. There was a provision for law enforcement to arrest someone driving under the influence of pot. However there are not yet any pot “Breathalyzers” and yes there are impairment tests, but a police officer was provided the provision to arrest if he/she suspected someone was impaired. What that boils down to is if someone has been hanging about with pot smokers and the cop on the scene feels like it, they can be arrested just for smelling like weed.

Another glaring disparity was that none of the citation provisions applied to large scale production. That means pot could and would go corporate because that is the only way to avoid all the fees. The taxes on large scale farming were less than for a home farmer as well.

Consider also the fact that this is would have been a state law not a federal law. The Feds could and probably would given that we now have an overabundance of Republicans in office, cut funding to California over this issue. California is in dire straits. We have tapped out the general fund, and the state has been borrowing from county and city governments as they please, (an issue which was also on the ballot). California cannot afford fiscally to lose federal funding for everything. Who’s going pick up the tab? Ryan Seacrest? I think not.

The interesting thing is that for all intents and purposes marijuana is legal in California. Californians can pay a fee to a doctor and get a prescription card that guarantees the right to use it. It also protects the workplace.  Because it is a health issue people cannot be fired, but employers have recourse because workers can be re-assigned for health issues. Also because it is a health issue, Drug and Alcohol agencies and Churches and the like have not been bothering with it. I think this would change if it became more like alcohol and they could then point the abuse finger at someone.

But you have to have a medical problem people out of state often say.   As I wrote in an earlier article, a medical issue is no problem. You can get approved for stress NOS (not otherwise specified) which applies to exactly everyone and things like tinnitus, fatigue and poor sexual function. Mostly anything you can sit in front of a medical marijuana Dr. and pitch works.

The landscape of California has changed. It’s sometimes weird but you cannot drive, walk or bike anywhere without smelling the sweet sensimilla. It is readily available; people can grow more for personal use without this prop. and you can be 18 not 21.

This whole thing reminds one of prohibition. You will notice that during prohibition alcohol was still readily available and small fortunes were made on illegal moonshine.
Funny thing though, when prohibition ended and alcohol was legal again somehow moonshine still was not made legal. People still get arrested for it. It is my fear that this is what this particular prop. aimed to do.

It would be nice to see this herb decriminalized. I also hear the argument that tobacco is readily available. Who do you know that grows their own tobacco? It’s not labor intensive on a small scale. Farmers used to grow it as a matter of course as a medicinal herb for pesticide, treating their livestock and evening enjoyment. This doesn’t happen anymore either, even though it is legal.

It is clear that the rest of the country was looking to California on this issue.  People seem to feel that if California with their shining example of Hollywood glamour does something it will spread its legitimacy to other areas of the country. But what happens in Hollyweird is not real. It is true that it is long past due for the prohibition on this plant to end. Since 1937 when the cannabis tax was enacted continuing with added criminalization it seems past time to make a turn.  But while we are considering change, let’s consider making good decisions and writing laws well.  We have often in our history felt the effects of poorly written but well intended laws that sounded good to people.  California can attest to the debacle of the three strikes law.

My suggestion is to get together and write a better proposal, putting the burden of taxes on big producers and not on the little guys/gals. Take out the abundant citations and loopholes for arrest. Nobody needs to wait on another state to do what they want in theirs, they just need to be determined and get busy.

Grainne Rhuad: Since 1937 when the cannabis tax was enacted continuing with added criminalization it seems past time to make a turn. But while we are considering change, let’s consider making good decisions and writing laws well.