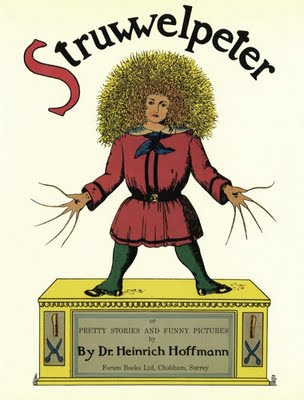 It was the in one of the most unexpected places that I was reminded of one of my childhood favorite books.  I was sitting in on a local production of the Grand Guignol.  A Victorian era tradition of shock and awe.  Guignol means “The Giant Puppet” and as the grand master of this particular production reminds us to begin with, we are all of us puppets of one sort or another.  The Guignol was and is somewhat of a Penny Dreadful brought to life.  It was a way to act out both the horrors of the era and the stifled sexuality.  Women were often attacked in these vignettes in one way or another.  The delights of the flesh were told in stories of the damned.  My companion asked me if I thought the traditional posters for Guginols were misogynistic.  After thinking about it a bit I said no.  On the surface they look that way but like so many other things in life in that time the things lusted after could only be talked about in disparaging terms.

In any case it was while watching this display of depravity that I remembered Der Struwwelpeter or Shockheaded Peter in its English translation.

The Theatrical version of Shockheaded Peter is the collective nightmare of the direction and design team of Phelim McDermott and Julian Crouch who also co-founded London’s Improbably Theatre.  Also deeply involved in this production were the underworld cabaret act, The Tiger Lilies who are known for their off key, off world frightening and educational accordion driven music.

The music performed by the trio Tiger Lilies and led by Martyn Jacques, who plays a mournful accordion and sings of cruel deaths in a sweet but strident countertenor, becomes itself, a character.   The songs draw the original stories into gloatingly gruesome lyrics, and the Kabuki-faced, androgynous Martyn Jacques delivers them with a relish that turns demonic whenever the word dead crops up. He does seem to love the word dead and will repeat it with relish.

Martyn Jacques is a virtuoso of the anticlimax. He overextends his songs’ grim conclusions to the point of absurdity. Yet the music, which captures the flavor of lurid Victorian street ballads whilst not cheapening them, lingers with you for days. I was humming the demise of the Bully Boys for several days. 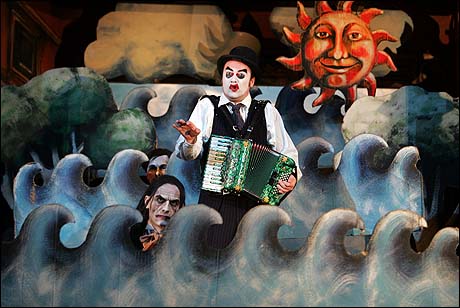 It reminded me also of Punch and Judy which incidentally the Tiger Lilies also revamped for our viewing pleasure.  Punch for those of you who don’t remember, is a delightfully nasty personage, the archetypal English clown figure, is unscrupulous, anarchistic and malevolent in all that he does, wittily and jovially murdering anyone who gets in his way, whether it be his own wife, the policeman, the doctor, the hangman or even the devil.

After revisiting the theatrics of Shockheaded Peter I simply had to have the books again, so I immediately ordered them up off the internet and waited with barely contained glee for them to arrive at my doorstep so I could dive in.

Shockheaded Peter was originally a book of stories that Dr. Heinrich Hoffmann (not the Nazi) wrote for his children as a gift.  At the behest of many of his colleagues and friends he published the work originally in 1845.  Mark Twain did an English translation in 1848 called Slovenly Peter.  Another one for girls followed called Slovenly Betsy and other Tales.  They became immensely popular as child rearing tools in the era before Dr. Spock came along and told everyone we had to talk gently at all times to our children.

Dr. Hoffman was an accidental psychiatrist.  In a day and time when people were only beginning to actively study the mind, he happened into a job at a lunatic asylum in Frankfurt Germany and worked extensively in revamping the system, planting gardens and focusing on harm reduction with his patients, many of whom were able to return home.  He was also most interested in children and instilling good behavior in them.

The stories contained in the books were short and to the point like “Little Suck-a-Thumb” in which a thumb sucker repeatedly warned that the scissor man will come with his scissors and remove his thumbs if he doesn’t stop, meets with the severance of his fingers, which does not in the least surprise his mother who had told him so. 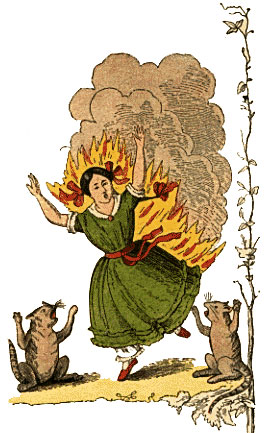 Or “The Dreadful Story of Harriet and the Matches” in which naughty Harriet defies both her mother and the sad warnings of her kittens about playing with matches and of course burns herself quite to death.

Now in this day and age of childrearing we have gotten to the point where we love to read stories to our children about nice things like “The Runaway Bunny” in which the over-involved mother rabbit goes to inhuman (and bunny) lengths to stay connected to her bunny who wants to runaway.  And we are all supposed to feel lovey and good about this enmeshment.   Another modern story book example of this is “I’ll love you Forever” in which a young mother promises to love her baby son forever and even creepily goes to such lengths and climbing a ladder into his dorm room to rock him in his sleep.  This is supposed to be okay, this obsessive overprotective weirdness.

But calling children to accountability for their actions, letting them know they will smell if they become slovenly or burn up if they play with matches or perhaps even be dipped in ink by the Tall Agrippa if they tease darker skinned people is somehow bad.   I don’t get it.

Children should know that there are consequences for their actions.  That their bully-ness will be met with punishment and not something soft like a loss of cell phones.  It seems to me that the more concerned we become with scaring them or hurting their tender little feelings the crueler they themselves become.  Can this all be blamed on parents?  Well, I think some of it certainly falls at their door.  But I also blame books and other entertainments.  The stories that we tell our children obviously have an effect on them. When we change the stories as Disney and other outlets have done to Grimm’s tales to make them have happy and nice outcomes we rob our children and ultimately our society of life lessons in choice and consequence.  Even the olde standard the Bible is edited about to be more pleasing to young people and soft hearted adults.  After all nobody wants to tell their kids that if they strive to become  followers of their favorite action hero Jesus, they may end up hanging upside down from a cross having their organs crushed slowly by gravity.  That’s not a nice outcome at all.

I think it clear that we need to preserve these tales with all our might and hats off to the teams that bring them to stage and airwaves.  Now if we could only bring back discipline we may be in better shape.

*To hear or watch Productions of Shockheaded Peter visit these sites:

Grainne Rhuad: It was the in one of the most unexpected places that I was reminded of one of my childhood favorite books. I immediately ordered them up off the internet and waited with barely contained glee for them to arrive at my doorstep so I could dive in.

Burt Campbell from Soap Was the Original Cosmo Kramer