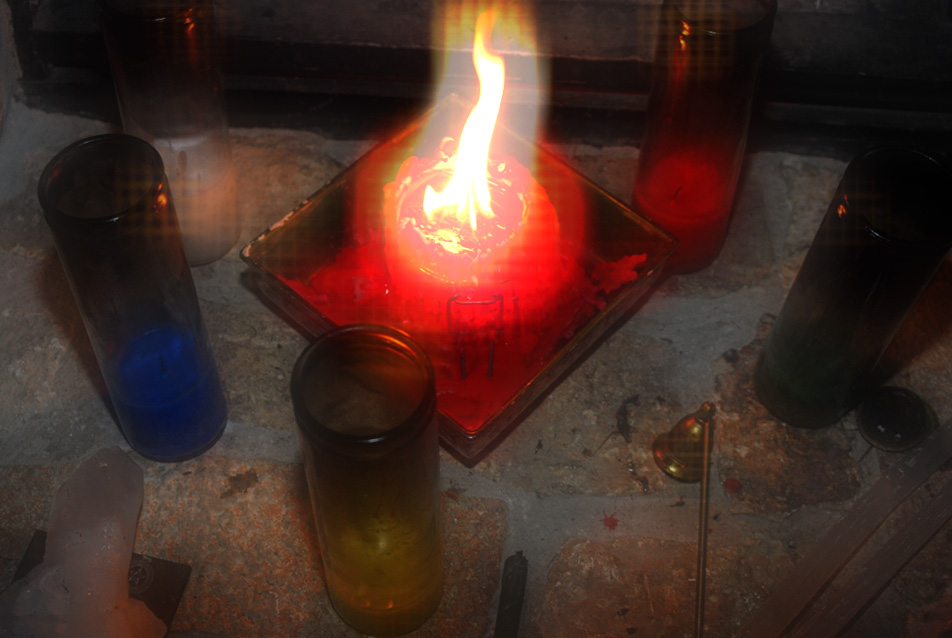 Whenever the news gets unbearable (as it often does), the following serves to remind me that we should take back our stories…

Two or three things I know for sure, and one of them is that to go on living I have to tell stories, that stories are the one sure way I know to touch the heart and change the world.

Come, gather closely, I am going to tell you a story — my story. Actually, it is only part of my story and this is no ordinary story but a story about story. So gather yourself, breathe softly… come listen, read…lean into this space, and be ready to receive the gift of story… an invitation…

It’s nighttime and the only glow in the room comes from the glass-encased candles bought from the corner “Botanica” — storefront shops found in Puerto Rican neighborhoods that sell herbs and “magic.” Variously colored candle wax poured into long glass receptacles with images of the saints and the Virgin Mary inscribed on the glass and promising anything from good luck to financial success. Though it is dark and cold, we, my two sisters and I, sit in rapt attention before the figure of my father, who is in the process of telling us a story. Our mother is somewhere in the darkness preparing the “Blackout Specials” we have come to love so much. However, the real star tonight is the story. For it is the story we crave tonight. It is story time in the Rosario household and this is sacred space.

How many of us have experienced the relief and serenity after expressing our pain and sharing the burden of a sorrow with another? Life is too difficult, the day is too long, to carry our grief alone or keep our joys to ourselves. How many of us have spent long periods in solitary loneliness? Then, like anyone who has been alone and finally gets a chance to speak, we have so much to say to one another.

I come from a long line of storytellers and I believe firmly in the power of the story to change, to educate, to bring us to wholeness. I believe this because it is in the telling of the story that we find healing. It is the basic unit of human communication, this telling of stories. Since the dawn of time, we have gathered together to tell each other stories — to share experiences, to ward off the darkness.

Tonight, my father is really into it and he’s telling us the story of “how the solar system was named.” He starts with Mercury, mentioning that it’s my planet, me being a Gemini, and tells the story of Mercury. He moves on to Venus and tells that story, and so on. They are his stories to be sure: part science, part classical Greek myth, sprinkled with Puerto Rican folklore, but it’s a great story and we laugh and giggle, and hold our breaths in anticipation.

There’s a television in the room, but it is turned off and no one cares, tonight is a “Blackout Special” called by our parents. In fact there are no lights on, all electricity has ceased to exist for us as we sit around the kitchen table, drinking the “Blackout Specials” (scoops of vanilla ice cream floating in orange soda). Tonight everything has been set aside. Beyond our the ramshackle tenement building we live in, modern life can be heard to be happening, but here at our humble kitchen table, we are into the story.

When we share our pain, fear, or the unmanageable aspects of our lives, we open up to the possibility of being more honest with ourselves. However, some people will tell only parts of their stories because they are looking only for validation. This is not the kind of sharing I am talking about. That kind of sharing is evident in the raunchy talk shows where fragmented people, suffering from lack of boundaries, go up in front of a national audience and humiliate themselves.

And we watch and pass judgment…

“Blackout Specials” was where I first learned the importance of the story. It became a family tradition, one we passed down to our own children and hope will pass it on to theirs. My father was a consummate storyteller. He could gather all the children on our Lower East Side block on a mid-summer’s day and have us sit fully engaged for what seemed like hours. As children, we loved those stories because as children we know intuitively that stories are who we are. It is the basic unit of our only human instinct: language. And as developing persons, we yearn story in the same way we yearn sustenance.

I remember when I first went back to school, in my late thirties, I was afraid of many things. Mostly I was afraid of making a fool of myself, and I felt out of place and awkward because I was much older than the other students. Because of this, I would not go to certain places at the university, one of them being the cafeteria. One day, as part of psych class assignment, I shared about this fear.

It so happens that one girl, who was overweight, was moved to share about her same fear of going to the cafeteria because she was afraid that people would look at her and judge her for being overweight. And as she shared, she began to cry. Then, one after another, other students began to share about their own fears. Others offered support and before we knew it, we became this story circle of sacred sharing. Eventually we all came to the same conclusions: that we were not alone in our fears (that it wasn’t something that was “wrong” with us), and that if we looked closely at our fears, they were sometimes a wee bit funny and irrational at some level.

We all went to the cafeteria together and laughed about it.

That’s the kind of sharing I am talking about. Of course, some things need to be kept more private and shared only with those we trust deeply. Nevertheless, sharing is important because it is in the telling and the unburdening that we find true healing.

Eventually, we would call our own “Blackout Specials.” The only rules were that everyone had to tell a story and everyone had to respect each other’s story. When the speaker of the story had the floor, no one could interrupt. The story could be anything: a joke, a story of a found object, an event, whatever. The important part was that we had a way to share; that we could sit and listen to each other, in sacred space — telling our stories to one another. The Blackout Specials make up some of the most memorable times of my youth. It is where I was allowed to sit in awe and wonder and learned that I too had a story. That my story was as important anyone else’s story and that I had to tell that story somehow.

Since the dawn of time when our ancestors huddled around the fire to ward off the cold and darkness, we have told stories. Unfortunately, today the ones telling the stories — the TV news and talk shows, Reality TV, the movies — don’t really give a fuck about respect or wholeness. We need to take back our stories and tell them to each other and pass them on to our children so that we will not lose this precious gift. As we talk, we unburden ourselves and learn from each other about closeness and vulnerability and what it means to be a human being.

Many years later, I’m walking down the street with my own son who was nine-years-old at the time. He too loved stories and when I would pick him up from school, we had a game we played. The game was that we had to tell the story of something new we learned that day. My son would run out of school and I will always remember the anticipation in his eyes as he would ask, “Well, Pops! What did you learn to day?!!” and I would share my story and he would share his.

In the year my father passed away, we requested that he lead a Blackout Special on Christmas Eve. My father was very sick at the time, but there we were, all the brothers and sisters with all his grandchildren, now all veterans of Blackout Specials themselves. We all took out turns, telling our stories. My son told the story of a scarf he and I found — he created a history for that scarf. We each sat and listened in the warm glow of Botanica candles.

Then came my father, the legendary storyteller — the creator of the Blackout Special himself — in all his glory, in the rarest of forms telling the greatest story ever. It’s is a moment we all will never forget.

And the “story of the story”? It wasn’t until many years later, when we became old enough to understand, that we realized how “Blackout Specials” came to be. You see, it was a matter of necessity. We were poor and sometimes my parents had to decide which bill to pay and sometimes the electric bill would go unpaid so that they could buy groceries. So my parents, in order to lessen our sadness, came up with the idea of the “Blackout Special.” On top of everything else, this taught us the most valuable lesson of lighting the candle instead of cursing the darkness. My parents put the power of the story in my heart.

May you be able to tell your story always…

And so it is with us here in the blogosphere: we tell our stories. Our stories of love and heartbreak, of our wishes and hopes. We tell of our gardens, of our victories and defeats, and in that way, we connect somehow in this world going so quickly into madness. We have no time to tell our stories anymore so we come here and cast our lines and we weave a web of stories.

And we listen, read, and tell…

By: Edward-Yemíl Rosario – Whenever the news gets unbearable, the following serves to remind me that we should take back our stories…