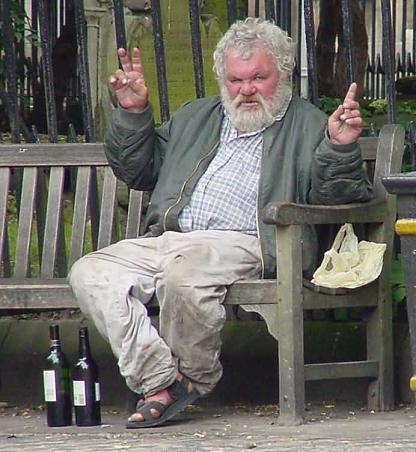 Drew, recently unemployed and in the twilight of his twenties,  realized that a rich IT consultant pales in comparison with a starving writer. Creativity enriches the mind. Laughter enriches the soul.  He, decided he could care less about both.  “I just want to get paid.   In all truth, I just want to write and make people think, laugh and escape, which is the essence of why we started scrawling on cave walls…”

I met Thomas two years ago moments after I stumbled into my third bar just south of the downtown square. Although I didn’t recognize the place, location or staff, I was waved in by the bouncer with a semi-friendly “Welcome back.” Unaffected, I found a quiet corner of which to sit and sulk, contemplating my life decisions that lead me to this point. I was handed my favorite scotch without asking, wondering if I could even pay when I noticed what appeared to be a homeless man sitting at the bar chatting it up with a semi-attractive bartender; although you can never be sure at that level of intoxication. I concentrated on the middle image of this guy as he floated around my blurred area of vision. He seemed extremely relaxed in a shirt that screamed derelict, striped and battered, lacking only an insignia of “Good Will” or perhaps “Department of Corrections” on the back.

I remember my cell ringing because I was digging in my pocket for it when this ghostly, malnourished figure plopped down across my table. I glanced up and recognized “homeless guy” from the bar smiling at me, then glanced down and saw what was probably the fifth booty call I placed, calling me back. I silenced the phone. To this day, I don’t know why.

A conversation ensued, for this I am sure. The actual words that were spoken, or probably slurred, I cannot dictate verbatim, however, if I were to dramatize it from the hazy memories I still try to assemble, it went something like this:

“I’ve read your work. It’s good.” He starts. “You’re talented.”
“I’m sorry?” I ask. “I don’t understand.”
“You left a play here last week. At this very same table, in fact. I read it.”
“Ya, thanks I guess. Playhouses don’t think so.” I hang my head, unwilling to make eye contact.
“Fuck Broadway. You’re talented man. Don’t quit.” He smiles even wider.
“Do I know you? I mean, besides for reading my, um… play?”
“You don’t remember? We took two girls back to my place a couple days ago? We listened to Ray Charles on vinyl? Ate some peyote pancakes?” He pauses for I suppose some sort of recollection from me. “You ended up passed out inside your girl and puked on her chest?” I feel like crying. “Really? Nothing?”

I can only imagine the roach infested crack house I have obviously drank or subconsciously erased from my memory. I don’t even care about the girl, although I should.

“I’m just kidding man.” He slaps my shoulder from across the booth, laughing.
“Thank God.” I whisper, peering into my plastic cup of scotch.
“It was her shoes, not her chest. Anyway, I’ve never read a screenplay about an incest love child that falls for the ghost of Brittany Murphy.”
“Well, um… I was aiming for something contemporary.” For a second, I perk up. He actually did read it. And I love talking about writing. Especially my writing. “I think the third act is a representation of how love is blind of all stigmas, like your age or if you’re alive. I’m especially proud of the scene where Brittany Murphy introduces the main character to Rapist Carl and his soliloquy on how love should never be refused. ”

There’s a slight pause. “I’m Thomas.” He reaches out his hand.
“Hi Thomas.” My head perks fractionally so that I can gauge the position of his hand. I meekly grasp it.

I look down and notice my drink is gone. I look up and see Thomas drinking the last of the cup I haven’t even touched.
“All in all, it was great, but the second act was genius.” Thomas adds after placing the empty cup down.
“You didn’t think the apology between Black Hitler and Anne Frank was too long?”
“Not at all.” I notice his smile is infectious.

And that’s when Thomas became my new best friend, someone who understood my vision, a talent once forgotten. For the better part of that night, we sat in silence. I would have scotch after scotch placed in front of me, and he would down each one. Randomly, Thomas would bring up subjects as boring and volatile as politics or religion, subjects I vehemently avoid, but it was near the end of the limited and sporadic conversation that a part of me, a strange section of my near-dead brain sobered. And a few vocal volleys and visual images were actually imprinted on me as if they were engraved. A dye, that as long as I live, will never cease to exist.

I recall that he tilted his head to the side, pursed his lips and raised one eyebrow. Then, words spilled out and graced my ears as if an angel were whispering into it.

“Do you do drugs?” He asked.
“Not really.” I replied. “I’ve always said I’m in a serious relationship with alcohol, and I refuse to cheat.” I pause, not really knowing what I want to divulge. “Well, I smoked weed a couple times. And once in college, I did whippets with a sandy-haired blond co-ed while she freebased NyQuil.” My mind immediately regressed to that day. “She said it was to increase the depth of her cognizant perception of intercourse while retarding the memories of her recent ex-boyfriend. I didn’t really know what she meant. I just wanted to get laid. I mean we all do. But I regretted it.”
“Did it work?” Thomas asked.
“No. I was too drunk. Ya know… whiskey.”

And there we sat. Two strangers in a vacant bar just talking. Years later, I heard the term “bromance” coined in a popular movie, and I thought back to that day. Thomas and I still keep in touch. And the play was never put into production. I was told there were complications involving a declining economy, lack of available theater techs and how our lead actor was arrested on a DUI whilst saying horrible things about Jews to his arresting officer. But it didn’t phase me. I wrote another five plays in succession not really hoping they would even enter the public eye. I simply did it for the love of words, the art. But I do have a favorite. It’s about this guy that only speaks in anagrams and has a penchant for negotiating with hookers, even to the dime or sometimes a rock of crack. I named him John to convey a universal message, however, my Great Uncle/Editor thinks that I’m underestimating the intelligence of my audience. The play opens with John phonebooking Candy when…

I’ll get back to you.

Drew White: And that’s when Thomas became my new best friend, someone who understood my vision, a talent once forgotten…