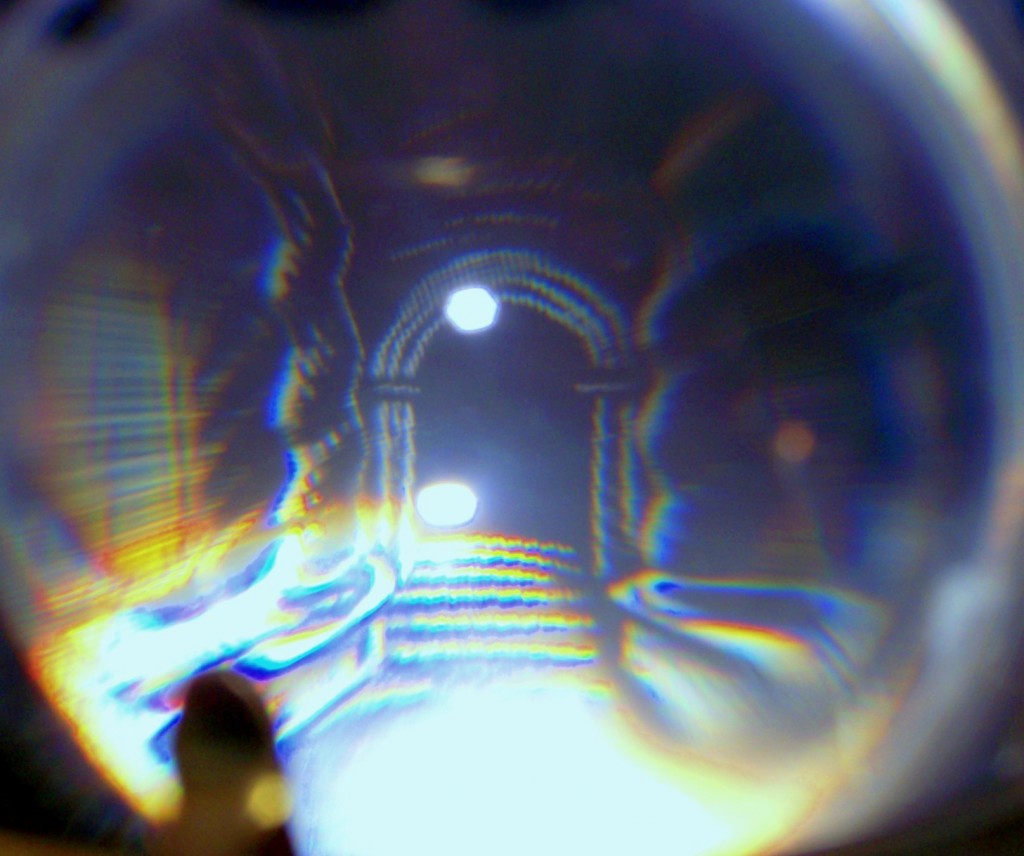 It was completely deserted.  Not even a security guard wandered the halls, or a janitor pushing his broom around.  Their footsteps rang on the tiled floor.  Their images rippled in the glassed in shops.  He touched the banister rail as they stepped onto the escalator.  On the underside of the rail, just as you neared the top, The brass had broken and corroded, leaving a ragged tear in the otherwise seamless metal.  He pricked his finger on it, and automatically stuck it in his mouth.  The drops of blood were warm and salty, just as in real life.  She had said, I’m as real as you are.  Maybe they both were dead, and this was his ascension.

Just as he reflected on this, he noticed a shop ahead of them with its lights beckoning brightly.  He hurried his footsteps, anxious to hear voices again, to see movement, to feel contact with warm, sweating bodies.  The shop was quite busy.  It’s customers were looking over packages on a shelf, wrapped like DVD offers.  “Is this what you’re looking for?”  She asked, while he hesitated, his eyes greedily taking in the mass of humanity on the inside, so very intent on evaluating their purchases.  He stepped back and looked up at the sign.  “Souls for the Living”.  His laughter was a short, sarcastic bark.  “You can’t sell souls.”

“Souls have become a lucrative commodity,” she mentioned casually.  “There are at least as many people who are willing to purchase souls as there are who wish to sell them.  There are some who have even set up a savings account.  It’s a tricky business as much of the supply and demand  is based on pure speculation and you can never be sure of the quality of your investment.  Still, as you can see, there are many who are willing to take the gamble.”

“I thought souls were something we were supposed to be born with automatically, like lungs, a heart and a brain.  You can’t package them and put them on the market.”

“Well then, if you agree you have a soul, wouldn’t you also agree there have been times when you have worried about its health, times when you’ve felt it was hungry, even lost?  Haven’t you ever wondered what would become of it if you truly abandoned it to someone else’s care?  It’s like sending an animal to the pound.  You don’t know what will become of it unless you go back and check on it.”

“I’m sure I haven’t either abandoned or sold my soul, so I don’t need to see if it’s been put up for adoption.”

“Ah, but what if you’ve lost it?  They sometimes take in lost souls too, you know.  Poor little things.  Would you like to check?”

“I haven’t lost my soul, either.”  The words came out more irritably than he had intended.  He tore his eyes determinedly away from the store front, thinking to himself, perhaps if I get far enough away from this, it will all end.  That’s it.  I need to distance myself from her.  He walked as rapidly as he could, but soon realized the floor he was on was completely unfamiliar, nor did he have any idea of how they had reached this secret part of the mall.  There seemed to be absolutely no elevators or escalators, only long halls that curved and split away from each other, sometimes rising imperceptibly in height, sometimes dipping gently to a lower level.

The shops that lit up here and there were all as strange as the first one he’d seen.  One advertised “War Manufacturers.”  In a display case directly in the window, were miniature modules with tiny, animated people all dressed in the various regalia of war.  Each module had a label; political, religious, industrial, imperialistic, and carried a book of instructions for assembly.  The customers in this dreadful shop were ominous to look at.  They wore long, dark coats, deep hats, and their faces were primarily hidden.  They picked up the modules with dispassionate fingers, studying seriously the diminutive combatants; some laying each other open with swords, some with knives, others with guns, bombs or machetes. They talked among themselves and appeared to barter with the proprietor, who seemed to be an affable enough fellow, rather brightly dressed and encouraging higher bids for his products.

A cubicle advertised “Lost Causes”.  It seemed to be a lost and found place.  While some people lined up to turn in an assortment of packages, shaking their heads sadly and shrugging their shoulders, others lined up to receive them.  Not all those in the reception line had their hopes fulfilled.  Sometimes, after the lady at the desk patiently scrutinized the list twice and even called the manager, she would sigh wistfully and spread her hands, indicating there was nothing she could do.  It seemed almost like lining up for a judge’s verdict.  Such intense joy there was when a package had been recovered, and the recipient walked away, face gleaming with new hope.  Such terrible despair in the faces of those who had waited patiently all day to receive and walked away empty handed. 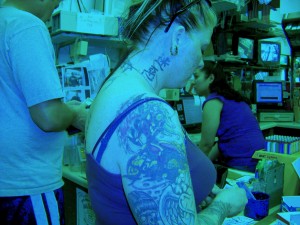 His attention however, became completely absorbed by a shop that announced from its banner, “Used Hearts.”  Underneath the banner, it read:

We take all used hearts and refurbish them with the best of today’s technology.
Today Only
Special discounts on partially mended broken hearts

He became conscious that he was very much alone.  There was nobody in the hallway, only the customers in the store.  Where do they go, he wondered.  Once they go inside.

She appeared, seemingly out of nowhere, once again enticing him to pay a visit to these strange locales.  “No,” he said.  “I want out of here.  Do you know the way?”

“I have something to show you,” she replied as an answer.

“And then, will this all be finished?”

He seemed to have no choice but to follow her.  The mall slowly disappeared as they entered a smooth, round corridor that also turned and dipped much as the hallway had done at the mall, but with no windows, no displays, no gaudy lights and no people.  At least, not at first.

The silence, at first, was overwhelming.  Although their curved walls had the texture and shine of painted metal, their footsteps were muffled, somehow absorbed in this material that gave no ring of its own.  “Were we lovers once, maybe in a past life, or for just one clear day when I saw you and you saw me?”

She stopped for a moment and looked sideways at him, sweeping back her hair from her neck, revealing a small birthmark.  “If we were, it must not have been very important if you don’t remember.”

She said nothing, but along the corridor walls, faint shadows appeared.  They rippled then slowly grouped together, forming barely discernible letters.  His eyes strained to read them.  Isolation.  Cruelty.  Denial.
“What does that mean?  Is that who I am?  Is that what you see in me?”

“You bought the tickets.  Why do you question your decision now?”

“I purchased nothing!”  He exclaimed.  “I made no decisions.  It was you who invaded my life, disrupted my sleep and led me into this nightmare.”  He grabbed her arm, squeezing it tightly until he felt the solid grip of bone under his hand.

“You’re hurting me,” she accused.

He released his grip and saw the slight bruising form around the muscles just above her elbow.  “I’m sorry.  I didn’t know you were so fragile.”

“We are all fragile.  Even you.  The smallest thing can hurt.”

A change had begun to occur in the corridor they had taken.  The unearthly silence had changed to a low, almost inaudible hum, accompanied by the vibration of machinery.  As they advanced, the sound grew steadily louder.  They entered a massive room that had no true up or down, only stairways climbing and dropping at all angles and tightly shut doors.  Along the staircases, workers traveled, carrying tool kits, stopping now and then to tinker with the bolts on a door and to listen to the sounds within.  Sometimes, quite dissatisfied with their tests, they opened a small panel to the side and tapped on what appeared to be a small keyboard.   When they were finished, the board slipped back and the panel disappeared, erasing the seams along the flawless metal.

“What’s behind those doors that those workers are so anxious to keep closed?”

“Our secrets.  The ones that bring pain, fear and destructive desires.  They must be guarded carefully, even from ourselves.”

She ignored the maze of staircases and continued along her journey.  The corridor now was unquestionably climbing a carefully graded but laborious ascent.   She stopped occasionally so they both could catch their breath.  “We’re almost there.”

The sound of machinery had grown much louder, along with a strange, rhythmic beat that seemed to come directly from underneath.  Once again, the corridor opened up to an enormous  theater.  It appeared to Luke to be an observation deck.  A walkway with a guardrail circled the outer edges of a an open dome that yawned deep below them.  Above him, the guardrail continued to wind, around and around, until it disappeared into darkness.  Across from him, at all levels, scattered here and there, other people were gripping the hand rail and staring intently into the vortex below them, just as she was doing.  After a moment’s hesitation, his curiosity overcame his hesitation, and he joined her. He staggered back gasping. 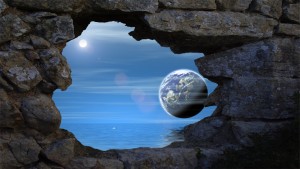 What he had seen below couldn’t be real, nor could it be the architecture of anyone’s nightmares.  Miles below him rotated a fractured, diminishing earth.  A network of metal columns, like spider legs, held it together, while in the center, another column was intently digging into the middle.  In fact, this mammoth crane had already dug through, and in the hole it was scraping away at, he could see the twinkling of stars.  He staggered back with revulsion.  “Get me out of here.  Send me back to the way I was before.  Release me.”

He pushed her roughly and she slipped over the rail.  He watched in horror as she tumbled down, down into the vortex with nothing to catch her fall.  “It’s over now.  It’s over,” he whispered feverishly to himself.  “She’s gone.  She can’t come back.”  But the scene remained the same, unperturbed by his violation.  “I’m not staying here anymore,” he announced to no one and everyone and there was no answer, no attempt to restrain him.

“I can find my way back,” he muttered. “We were climbing steadily up.  All I have to do is go back down.”  His footsteps hurried as he felt the sureness of his descent and at last reached the busy workers sealing doorways once again.  One door stood open.  There was no other exit.  He stepped through.

The room was dark and filled with disembodied, chattering voices.  Look who’s come back.  I told you he’d never amount to anything.  Always looking out for number one.  What do you have to say for yourself, boy?  He has the tickets.  Then he can fly. The floor dissolved beneath his feet and suddenly he was tumbling, falling into an endless void.  “It’s not my fault,” he cried out, but there was no answer beyond the cackling voices.  Three square, yellow tabs floated beside him.  Isolation.  Cruelty.  Denial.  “It’s not my fault,” he cried again, before the darkness completely enveloped him.

By: Karla Fetrow – Souls have become a lucrative commodity. There are as many people willing to purchase souls as there are to sell them.