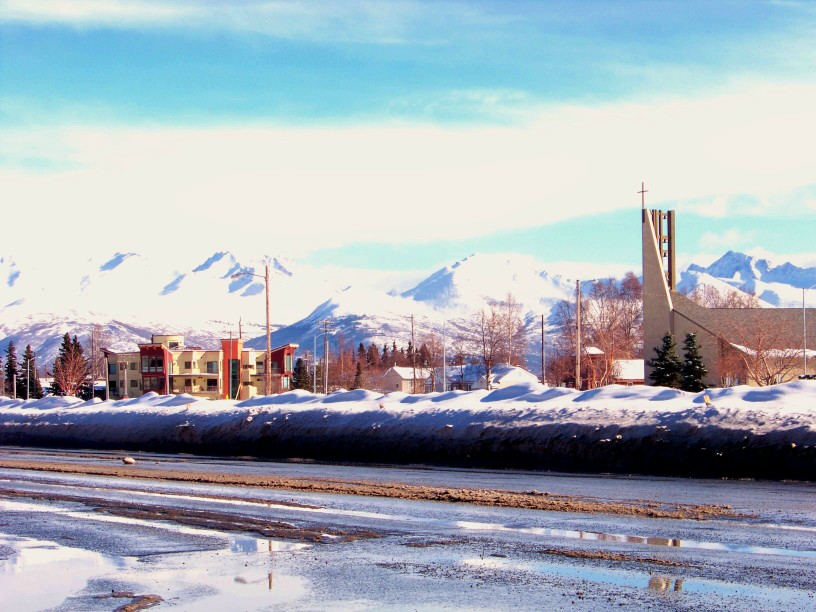 In American slang, break up means the parting of ways between two people; a melancholy time fraught with trauma, introspection and regrets.  In Alaskani, the word takes on a totally different meaning.  There is no true rendering of relationships in the Alaskan vocabulary.  Conscious of the statistics weighing out one woman for every four men, the guys usually assert, “I didn’t break up with my girlfriend.  I lost my place in line.”

Break-up is a season.  Alaskan seasons don’t count spring, and sometimes, not even the word, “summer”.  The seasonal shifts fall into the terms, “construction, winter and break-up.”  It is the messiest time of the year.  Unpaved streets that cars had traveled all winter with ease, are suddenly filled with slushing snow and dangerous potholes.  Car washes make a fortune as vehicles run in and out of them, returning three days later with the same accumulation of mud and grime that had recently scrubbed away.  Nobody cleans their carpets or lays down new ones until after break-up.  The mud boots come out and the Nike footwear and Timberline boots are saved for dryer weather. 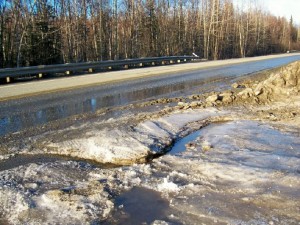 Break-up separates the sourdoughs from the chechackos.  Chechackos are another Alaskani word, with a definition similar to the Spanish slang word, “gringo”.  You aren’t an Alaskan until you learn to think like one.  There are a couple of official definitions for a sourdough.  If you’ve lived in Alaska for a minimum of twenty years, you are a sourdough.  If you’ve soured on Alaska, but don’t have the dough to get out, you are a sourdough.  According to one of the oldest standing tales, there are three requisites for becoming a sourdough if you want the quick fix title.  You must piss in the Yukon, sleep with an Eskimo and wrestle a Polar Bear.  After hearing the requisites, a young chechacko chose the more instant option.  When returning to the cabin of his host, his clothes tattered, his face and arms mauled, he said, “I pissed in the Yukon and slept with a Polar Bear.  Now, where’s that Eskimo I have to wrestle?”

Alaskan break up is always heralded first by a false spring.  This can occur any time from early February to late March.  For a week or two; sometimes three; it appears like break-up has finally arrived.  The chechacko celebrates, thinking the winter is over.  The locals know better.  No matter how early or late the first signs of snow meltage arrive, there is always one more cold spell before the real thing.  This year was no exception.  The winter was mild enough this year that the follow up of an early spring seemed natural.  While February bathed in warm weather, the unseasoned transplants declared happily break-up had arrived.  “Not so,” said the locals.  “We still have March to go through.”  Sure enough, not long into the second week of March, a massive storm front moved in, dumping an extra three feet of snow to the winter’s accumulation, than plummeting into a -5 degrees F. cold spell for the next six days.

The chechacko thinks cabin fever delivers its worst blows in January.  The Alaskani disagree.  Years of experience and environmental adjustment has already told their wary minds that January is the longest, coldest and darkest month of the Alaskan winter.  Bear-like, they hunker down, hibernate for long astonishing hours, and wait for the sun’s return.  The torment comes during break-up, which usually begins in March. 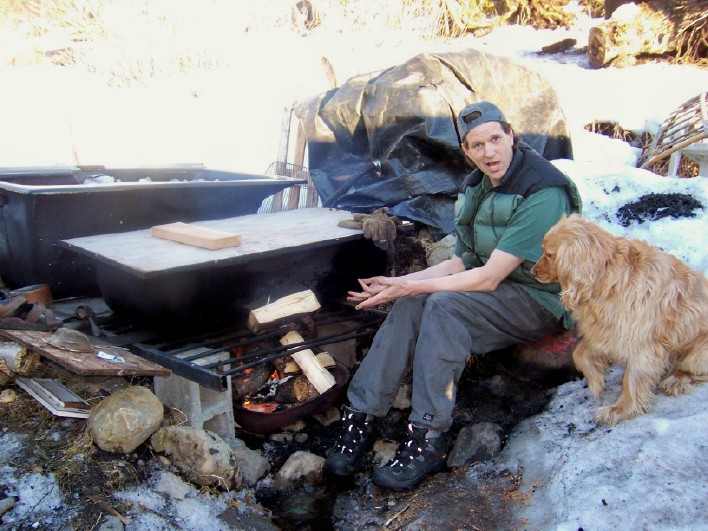 Cabin fever is the first symptom of a series of fevers that affect the Alaskan people.  Trailing directly behind cabin fever is fish fever.  When the first official day of true break-up shone benevolently down on a longscape eager to thaw,  and the bar-b-que grills, the cross country vehicles and camping gear were brought out and polished, the locals sniffed the air and smiled with satisfaction.  “I smell fish.”

Alaska is a tease and exhibits this characteristic most flagrantly during break-up.  After the initial sudden thaw when the snow begins to shrink and water runs freely through the streets, break up is a series of advances and retreats.  Some days are astonishingly warm, with temperatures that soar as high as sixty, but still blinding with the stark black and white graphics of a snow covered landscape.  Other days, the melt doesn’t begin until late afternoon and halts its progress in the dark hours of the night.  Sometimes, on a whimsy, a snow flurry arrives to cover the progress of earth’s brown exposure.  You can’t really do that much without sludging through slush and dangerous conditions.  At any time, there could be an avalanche if you’re thinking about your snow machine or ski’s.  The ice on the lakes has become too thin and untrustworthy for skating.  There is little you can do about yard work until the ground thaws.  You wait, inhaling glorious days of warm weather in a mud bath mixed with ice and snow.

Fishing fever begins as soon as the rivers are free from ice.  Patches of snow still cling to the ground.  The trees are still bare, but trudging through puddles and sludge doesn’t make much difference when you’re wearing hip boots.  The important thing is that you are out there, fishing.  It precedes all other gainful employment, such as yard cleaning, gardening or getting around to building that deck you’ve been putting off for the last three years.  Until you can say you’ve fished and have a few fat salmon in your smoker to prove it, there is no quenching the fever. 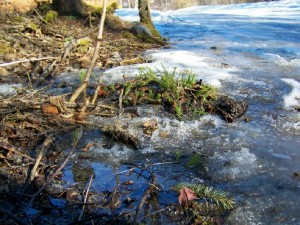 There aren’t many people who would recommend visiting Alaska during break-up and the accompanying feverish state of its inhabitants, but there is a remarkable occurance that accompanies the last sighing breath of break-up weather.   As fast as the snow melts, and patches of bare ground are exposed, plants begin to grow.   The tender young grasses and tightly rolled ferns cling close to the warming trunks of trees.  Thick green buds appear within days of full ground exposure.   In the secret,  slumbering hours of nights that are now no more than a few hours long, nature paints a new landscape.  She presents with the same staggering surprise of waking to the first snowfall, only instead of a wintry blanket, the earth is quite suddenly, and breathlessly green.  There are no year limits to the wonder of this miracle; whether you grew up with it as a child, whether you’re ninety years old; your heart stops for a moment.  You breathe a sigh that floats with the butterflies drifting unconsciously by your window.  The world that just yesterday was stark with naked trees and barren ground, is vibrant with rustling plants, flitting insects and opening flowers. This is the day all Alaskans wait for, the reason they grit their teeth when Jack Frost claws at their windows and creep under their doors.  They slumber through the frigid months when sunlight is only a dim memory, dreaming of that one special morning when they’ll awaken and the earth in triumphant fanfare, has spread out her bounty.  Break up is over and it’s summer. 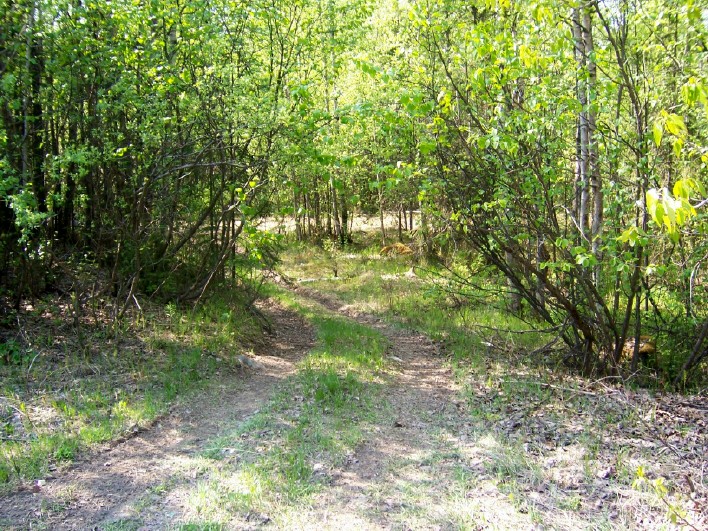 Karla Fetrow – Alaskani definitions explain the word, “chechacko” and give a whole new meaning to the word, “break-up”.

My Non-Fatal Vacation at SeaWorld