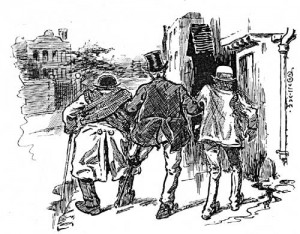 God was like a father to Son and Ghost and he was the one who came up with the schemes and took care of them when they fucked up. He had a palatial squat in Northern London, contacts and influence in Looting and a daughter to die for.

Son would do anything for God. He’d adopted Son from a woman who had been raped and didn’t want to keep the baby. Son was a sickly kid. He did all sorts of drugs and got into all the New Age shit. But he was such a sweet kid, generally. It’s true that when he threw a tantrum he could get into one hell of a rage, though. We thought he was prolly schizo. But he would’ve laid down his life for God – but not his daughter. Literally.

Ghost did stuff. Got stuff done. Even in prison for rape. Ghost met God the Chaplain, told him his life story: lynched grandfathers, raped white women, beatings, doing stuff, getting stuff done. When he got out they hooked up together and Ghost just comes and goes. By the way, he has the hots for God’s daughter.

They tried to join a photography club
Ghost negatived out, as always
God freaked out in the dark room
Son became polaroid.

God, Son and Ghost. The Plan

God spoke:
You to the back
You over there
I’ll do the rest
Son scattered
Ghost had an allergy

It didn’t quite work out that night
They are still good friends
Son sucks his thumb
Ghost’s set up as a dentist.

Twas a late autumn eve in the city
The All and the Everything were just, almost exactly
Where they should be…

God wanted to knock down a wall to extend his squat
Gave Ghost five quid
Ghost gave God a quote
Son overheard and remembered
“Suffer little camels to come to me through the eye of a needle.”
Son’s memory was fucked.

God provided tools and plaster
Ghost screwed a while, got plastered
Son wore rubber boots and a hard hat

Twas a late autumn eve in the city
The all and the everything were just, almost exactly
Where they should be…

We here at Subversify are happy to welcome Delbor Greebies who has entertained some of us for some time.  We especially enjoy that his artistic ramblings seem to get under the skin of all types of people both those you would expect and those you would not; we are told he even raised the ire of a nice Dutch woman!

He’s an English language facilitator working with professional French people who need to communicate with the rest of the world in order to make a living. If only they were all as talented at communication as Marcel Marceau… (He teaches English to French adults.)

He has an American wife.

He doesn’t usually speak about himself in the third person; this is an exercise in style.

He is but a lost soul wandering through the corridors of literary excellence in need of love and the occasional hug. But, being a Brit, he much prefers having the piss taken out of him. But not too much. And not too soon.

Time for a nice cup of tea.

By: Delbor Greebies
God was like a father to Son and Ghost and he was the one who came up with the schemes and took care of them when they fucked up.