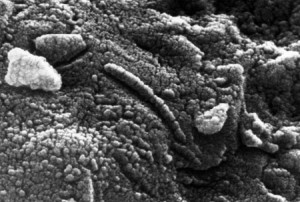 In the inside pages of the newspaper, recently,  I came across an article about fossilized Martian bacteria  found inside a meteorite, Allen Hills 84001, that was blasted out of Mars and arrived in Antarctica 13,00 years ago. These bacteria made headlines in 1996 after fossils were found in the meteorite. Scientists believed they were bacteria from Earth that contaminated the rock while it lay in the frozen wastes. . Now, it appears, they came from Mars.

This is such a very, very significant bit of news that I wasn’t surprised at all to find that it was buried inside the newspaper instead of plastered across the front page, where it belonged. It’s so very important that I should be astonished that it got reported at all.

This discovery, if those really are Martian bacteria (even if extinct) changes everything.

It challenges, directly, the standard religious stands regarding the centrality of the creation of humanity on this planet for a divine plan. If humans are the highest form of a god’s expression of creative ability, why make bacteria on another planet, especially one which is to all intents and purposes, now dead? If the bacteria and other life on Mars is now extinct, why did that, allegedly benevolent, god allow such life to die?

It asks of the Rapture-ists a further question: if life can exist on another planet, why should one believe in any theology which professes that the world would be ended in some religious Armageddon between good and evil?

It asks a question which I don’t think the Creationist crowd would like to confront: if there is no such thing as evolution, why would bacteria be formed on another planet?

It demands of ethicists a decision. If bacteria or other forms of life still exist on Mars, to whom does the planet belong? Do we, if and when we have the ability to send expeditions there, have any right to do anything to that planet? Can we act as the post-modern equivalent of the conquistadores in South America? Can we justify even the possibility that our intervention might irretrievably damage a fragile ecosystem?

It calls for questions about space exploration. If microorganisms are encountered on other planets or satellites, and these are sufficiently adaptable to be pathogenic to humans or other life-forms on this planet, what should be the procedure to be followed? How can we prevent that possibility? What should we do to prepare for epidemics caused by alien microbes? Can we launch space expeditions blindly, without taking into account what might happen afterwards?

It demands of ordinary people, of all of us, the realization that we are not alone in the cosmos. If bacteria can evolve on Mars, with its thin carbon dioxide atmosphere, its near-waterlessness and its intense cold, then life can evolve just about anywhere. And since the evidence is overwhelming that a far larger number of stars than we ever imagined have planets around them, it’s almost certain that a very large number of them will have life of some form. Given time and a suitable environment, then, other intelligent and civilised races will have evolved on other planets. We might be – in galactic terms, and this is just one galaxy among billions, each containing billions of stars – ants crawling on a pebble and thinking of it as the universe. What price our petty territorial squabbles and Eternal National Frontiers then?

No wonder this news didn’t make the headlines. Uncomfortable truths seldom do.

By: Bill the Butcher
This discovery, if those really are Martian bacteria (even if extinct) changes everything.