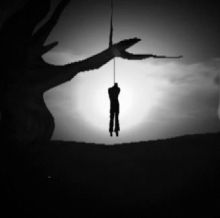 Being the Story of a Poorly-Reported Event in a Small Texas Town….

It’s just really tragic after all the horrors of the last 1,000 years we can’t leave behind something as primitive as government sponsored execution.
— Russ Feingold; U.S. Senator

A modest brick building in the small town of Huntsville, Texas (population 35,000) houses an horrific secret – the place where over four-hundred people have died in the past 33 years – and 247 since the current governor, Rick Perry, has taken office.

Last week, while the rest of the country was planning Thanksgiving festivities, Robert Lee Thompson was planning something else -what do to with his corpse, his modest property, and who to invite to the circus which had been planned to mark his passing.

You see, Robert Lee Thompson was about to become the latest in a series of new records in the State of Texas – by signing-off on the execution of Terry Hankins in early June of this year, Governor Perry set a macabre ‘record’ – Hankins became the 200th victim of Texas’ execution-mill since Perry took office; a record previously held by the previous occupant of that office, George W. Bush.

He fired a pistol over the head of a convenience-store clerk. Thompson’s partner in the holdup, Sammy Butler, was identified as the trigger-man who actually killed the clerk; Butler and Thompson were tried separately. Butler got life in prison; Thompson was sentenced to death.

Thompson, likely insane (in his statement to the police, he told them that ‘god’ had told him to ‘do something’ about Middle Eastern convenience-store clerks who were discriminating against blacks), was sentenced to death for the crime committed 13 years ago when Thompson was 21.

Two days before his execution, Thompson’s attorney pleaded with the Texas Board of Pardons and Paroles, stating that given Thompson’s mental-state the sentence was not fair, and asked that the sentence be commuted to life.

In a rare reversal of what has become policy for the Texas Department of Corrections, the Board voted 5-2 to commute Thompson’s sentence. Perry rejected the recommendation, in effect giving the greenlight to execute Thompson.

Perry, with his value-system firmly on the right-hand side of the radio-dial, has made it clear that he will not change his position on the death penalty (he’s also come out in favor of ‘boy scout values’, and secession).

Texas’ track-record of executing people is consistent – but it’s not without serious controversy. Perry signed off on the execution of a Mexican national rather than return him to Mexico to serve a life sentence (Mexico does not have the death penalty); in the case of Cameron Willingham, Perry fired three members of the Forensics Board when they raised the all-too-real potential that Willingham had been executed while innocent of the crime for which he’d received the death penalty.

(Thompson went to his death peacefully, declaring that ‘Allah would forgive’ him. His mother screamed, cried, and pounded the walls; demanding to be taken away before her son died. Thompson was pronounced dead at 6:19PM; less than ten minutes after receiving the first of three drugs in the lethal-injection process. In addition to the relatives of the victim and Thompson’s mother, there were two reporters. News of this event was a footnote, nationally.There are over 300 people on Texas’ death row. A disproportionate number are persons of color.)

There are no further executions scheduled through the end of the month. They tend to shut things down for Thanksgiving and Christmas.

By Astra Navigo Being the Story of a Poorly-Reported Event in a Small Texas Town…. It’s just really tragic after all the horrors of the last 1,000 years we can’t leave behind something as primitive as government sponsored execution. — Russ Feingold; U.S. Senator A modest brick building in the small town of Huntsville, Texas…

The Jackals Of War