A Summer Evening and a Big Flying Saucer… 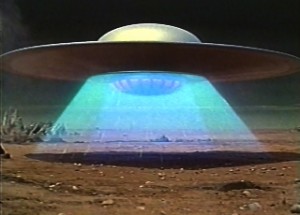 It was a dark and stormy night – somewhere in the world; here in Oregon, it was a perfect summer evening – around seventy-five degrees and not a cloud in the sky; the sort of thing which made me ruminate about Life Beyond the Stars when I was a boy, and which invariably drew me outside with a glass of wine and a cigar in my later years.

I was on the deck outside my office near the reflecting pool when I heard the sound – a sort of grinding noise with an odd ‘clank’ thrown in every now-and-again; it grew louder from up-above the house, and seemed to terminate somewhere in the south-east corner of things.

I pushed myself out of my steamer-chair (never liked doing that; especially when Whatever Interrupted Me had also interrupted my 43rd reading of a Hemingway novel).

I walked around the corner; my feet making light crunchy-sounds on the gravel-path. As the corner of the garage gave way to the vista beyond, I noticed it.

A saucer. Damned if it wasn’t a saucer — steaming and kind of leaning to one side (must have hit a gopher-hole with one of its legs). Trailing from one side was a wire, which I recognized as one of Comcast’s.

“Shit,” I said to myself. “They probably took out my Internet.”

I walked closer; glass of Temperanillo in one hand and a Hoyo De Monterey Double-Corona in the other. I heard a whir, and a walkway gradually lowered. Down the walkway waddled a little fellow who looked for all the world like that drunk asshole from “Little People; Big World.”

I took a big gulp of Abacela Temperanillo. “I’m either dead where I stand, or we’re going to have a nice, long talk about the Wizard of Oz,” I thought. “Might as well do this drunk.”

“You’re going to have to do better than that. Don’t you guys have a universal translator, or something?”

“Matt” (I’d already named him, absent knowing his real name) turned, looked up the ramp, and said something rapid-fire, like playing a tape-recorder backward. Another Munchkin waddled down the stairs.

They had a brief conversation, then the second Munchkin (who looked a lot like one of the members of the Lollipop Guild, come to think of it) turned to me and said, “I am the Studier. He is the Leader. I can speak your – talk – rather well.”

“Leave it to any organization, anywhere in the universe, to put an ignorant asshole in charge of things,” I thought. “Oh, well.”

I took a small sip, pursed my lips, and made a noisy ‘squirt’ on the lawn. “P-tooey,” I said. They looked at each other and nodded, vigorously. Progress was being made.

“P-tooey, we wish to meet leaders of this place.”

I laughed again — they thought my name was ‘P-Tooey’. Hell; might as well go with it….

“Wait a minute. What’s your name?”, I said, pointing to the ‘Studier.’

“K’Khan”, said the Studier, pointing to himself with what looked like a four-fingered hand.

“I’ll probably wake up in a minute. Might as well have fun with this one,” I thought.

“Hung-gree?”, said K’Khan. He managed to look puzzled, even to me.

“Yes. Hungry.” I pantomimed eating; something I figured everyone – even from out-system – would understand.

“Oh, well. I tried. You’d like wine. I think.” Then, I took a good look at the saucer, trailing my Comcast cable. I realized that Comcast would be here, even in the middle of the night, to re-run the damn thing to the house.

“Look. I’m sort of the unofficial Mayor of Hilltop, here – but I’m gathering that’s not what you’re looking for. You want the folks who run the whole damn place, right?”

“Tell you what. You have maps? How’d you get here?”

“Matt” was rather upset by this time, and began berating my new buddy K’Khan. I cut him off.

He turned and glowered at me. “Where I come from, you’d be just another asshole on Reality TV,” I thought.

“Yes. Go. As in ‘vamoose.’ Comcast is gonna be here in a few minutes; it’s getting dark, my cigar’s done, and my glass is empty. You know how to find major cities?”

“Explains the shiteatin’ clank in your transmission.” (I’d always wanted to use that line, ever since I’d heard my grandfather use it when I was five. But I digress.)

“Good. Steer South/Southeast from there. You’ll find a town full of a lot of self important people and a shitload o’ marble monuments. Plenty-plenty ‘leaders’ in that town.”

“Matt” and his sidekick had another rapid-fire conversation. “You come with us,” said “Matt”.

This, I hadn’t counted on. “Like hell,” I replied. “I have to answer the door when Comcast gets here. I’ll have hell to pay getting the divots out o’ my lawn tomorrow. I hope you’re gone before my neighbors get home.”

“Those who talk to you and give you news.”

“No, I won’t,” I said, still laughing. “Do names like ‘Rush Limbaugh’, ‘Glenn Beck’, and ‘Sean Hannity’ mean anything? ‘Ann Coulter’; ‘Gary Gatehouse’? Start with them, all right? What kind of weapons do you have in that thing? Can you blow Washington, D.C. away? I mean, for real?”

I turned for the house, still laughing. Over my shoulder, I said, “Have at it. I’ll hold you to it. Do not disappoint me.”

The ramp whined as it retracted. The wheezing and clanking began, and the ship climbed upward, then disappeared into the eastern sky.

Astra Navigo has Submitted for your approval, a bit of whimsy – a polemic against the concept of ‘bad aliens’ – regardless of their origin – and that the biggest disasters may well be blessings in disguise….