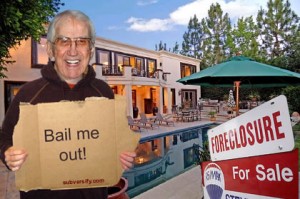 In 1991, Ice T uttered the now ironic words “I’ll never go broke, I got property.” In his song Ziploc on the critically acclaimed album OG. While Ice T himself hasn’t gone broke. A lot of other people depending on this advice have.

Beginning in the ‘90’s and continuing on to the present, young up and comers have made it a religion to buy anything and everything they can get their hands on. Particularly we see this in the world of celebrity. The Big Bling of the Rap industry, with their huge cars and paid for “merry men.” The outrageously trendy purchases of the Movie Stars and Models whose countenances American Youth strive to emulate. “Oh if I could only have a purse like Fergie…..My life would be full.” The over the top spending on vacations that we soak up while waiting for clerks to swipe our food. But above all of this Hollywood and her extended family-i.e.: Athletes, Musicians, and Socialites. Have in the past 20 years pumped a lot of cash into real estate. Buying up several manses across the country often more than one in the same city. See they heeded the Ice’s call. “I’ll never go broke I got property.”

Too bad for them it’s not working out that way. You probably weren’t surprised to learn about

José Canseco walking away from his house. But for God’s sake Ed Mc Mahon almost lost his home! Celebrities and their hangers on from record moguls to , well….The Donald are facing huge financial losses with the mortgage crisis.

The question that comes to mind is how on earth was anybody allowed to get into so much debt in the first place? Hip Hop producer Scott Storch is in it for 10 million dollars. Chad Wilson of the Bengals hasn’t bothered to pay his property taxes for four years and has racked up a debt of 13K. T-Boz formerly of TLC is in it for 530K. Guess it’s hard to make money without the L in your group. Heck even “reality” game show winners are losing their homes. Currently there are 3 extreme makeover homes on the market. And that Sweet Superintendent Lady who won a cool million on are you smarter than a 5th grader…Yep her too.

Okay, so it’s clear that these people both make a lot of money and have a lot of money. So why do they get to coast along for so many years not paying for anything? The average bloke doesn’t get that luxury. To illustrate, let’s look at a true life story of an everyday family.

The Mc Mackey family sold their house in 2005 for a profit, which they sat on while looking for the right home for them. They weren’t looking for anything fancy, just an average three bedroom in the school district their kids attended, so they wouldn’t have to travel as far, and close to work and shopping so they wouldn’t have to drive as much. When they found it, they made an offer. It being a seller’s market at the time, they didn’t get much in the way of negotiation. They were also disappointed to find they fell just below qualifying for a prime rate loan. At the advice of their realtor and mortgage broker they took an interest only second on the house. The reasoning was that they would be able to re-finance in a year when their rating came up one point.

Problem was no matter what, their rating never came up one point or the mortgage company in question-Countrywide, changed their system of rating, conveniently just as they were applying. Two years in the McMackeys knew they would not be able to keep up. The interest only loan about to expire, their new mortgage would be double what they were paying. They proactively contacted Countrywide and turned over all their financial information hoping to get a better rate and keep their home. They figured, since they were employed in a professional capacity and making enough money for the original payment, it shouldn’t be a problem. Apparently Countrywide thought differently. They got no help and their mortgage doubled. Obviously they couldn’t afford it and missed two payments equaling $5000.00 and were summarily served. Their house was foreclosed on and sold by the bank for much less than it was worth. Much less than they would have received if they would have helped the McMackeys stay in the house.

How is it that Mr. and Mrs. Everyday could lose their home over $5000.00 but celebrities and Sports Stars can rack up bills in the millions? This blatant entitlement and privilege that is extended to people who often have nothing to redeem themselves, other than their looks is at the epicenter of our financial and probable cultural collapse.

Mr. and Mrs. Everyday are paying the bills of people who pretend to have lives on camera. People who play games that they should be playing because they love it. People who make money off of convincing other famous people that they can’t do without their services. Ahhh, Trickledown economics, got to love it!

In any case it is clear that these people living in Neverland, which by the way is also in foreclosure, are starting to feel the crunch as well. As they should. But will it ultimately make a difference to the rest of us? Maybe. Maybe we’ll now start seeing the One campaign do spots for Foreclosed Americans, rather than Africans with AIDS. Because we all have been told “As goes California, so goes the rest of the Nation.”

Methinks they should have been listening to a different tune than that of Ice T. Something along the lines of Red Hot Chili Pepper’s “Tell Me Baby” which offers up the sage advice. “Save the fat ‘cause they will find a way to trim it.”

by Grainne Rhuad   In 1991, Ice T uttered the now ironic words “I’ll never go broke, I got property.” In his song Ziploc on the critically acclaimed album OG. While Ice T himself hasn’t gone broke. A lot of other people depending on this advice have.   Beginning in the ‘90’s and continuing on…

Gambling and the New Rules of Social Behavior