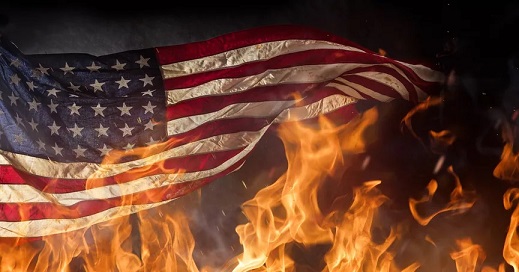 I have complicated views on the flag. I grew up in the 1980s, pressured to pledge allegiance to the flag of the United States “and the republic for which it stands” during school hours.

It was considered ignorant and disrespectful to not show respect for American patriotism after school hours and in all aspects of life, especially since it was implied that doing so meant you took issue with the military.

I never did pledge allegiance because at the time, I felt that my religion taught only God deserved allegiance. It would be impossible to be both a servant of God and a servant of a fallible nation, run by imperfect humans. When one had to make a choice, he chose the perfection of God over the corruptibility of the President.

Now we’re in a new age of liberal vs. conservative platitudes and we’re being “pressured” to avoid flags altogether because of the United States’ tarnished history of injustice.

How does it feel to progress over thirty years from a socially outcast nerd to an enlightened reformer? All surprisingly, without any effort whatsoever? All that’s changed is the fact that I no longer worship God or Country. By default, my natural instinct to avoid flags and patriotic promises is now perfectly in line with progressive behavior.

How does it feel? “Unsettling” is a fitting way to describe it. What’s truly bothersome about this cultural shift is that it seems to be coming from corporations, not people. Celebrities encourage us to “take a stand” by following pledges they’ve made and promises they’re delivering. Sports stars, politicians, billionaire capitalists – these are the ones making pledges.

All these years later, what I’ve learned about the United States is just one simple thing. They gave us something that we all take for granted. Freedom of speech.

It’s the price we pay for having an opinion on something. Boycotting companies and individuals, and accepting the consequences of your beliefs, is all fair game. It’s the only thing truly and classically American in a quickly evolving culture.

The truth of the matter is that nobody owes us anything. Trying to collect on the love we deserve from other people (or think we deserve) is a lost cause and lonely waste of time. That’s something I can say from experience. The world will never love you enough, so love yourself.

Does the United States deserve the censure that it’s getting? Sure, but what flag is blameless when you start to read the history and brutality of old world empires?

Boycotting is a wonderful way to express yourself and hold true to your personal values. Your choices and moral stances define who you are and what you contribute to the world.More power to you if your boycotting choices are based on your own personal truths and not borrowed from celebrities and politicians, who insist they understand your life better than you do.

So I say bravo to everyone exercising their freedom of belief – boycotting the Flag(s), boycotting Nike, and boycotting Colin Kaepernick, who is a multi-millionaire celebrity – a group of oblivious people that I boycott as a source of wisdom by default.

I have complicated views on the flag. I grew up in the 1980s, pressured to pledge allegiance to the flag of the United States “and the republic for which it stands” during school hours. It was considered ignorant and disrespectful to not show respect for American patriotism after school hours and in all aspects of…

Self-Care for Any Lifestyle: How to Flourish on a Budget

“Not Even Addiction is the Same”