When There is no Chance of Peace: The Russian/ American Stand-Off 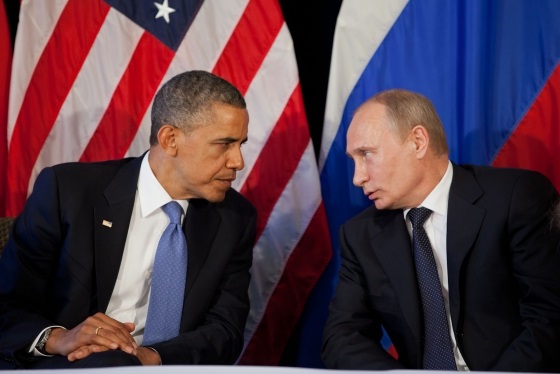 No two nations have been able to create as much opposition on a global scale as the conflict between the United States and Russia. Beginning as a political struggle between one-party Marxist theorists and capitalism with the power of democratic vote at the end of World War II, it escalated from a silent agreement to disagree to a not-so-silent nuclear arms build-up along Eastern/ Western European borders. Few countries chose neutrality. The non-aligned bloc consisted primarily of Yugoslavia, Egypt and India; countries that rejected the political structure of either communism or democracy.

Appropriately, the steady accumulation of nuclear arsenal led to a doctrine referred to as MAD; Mutually Assured Destruction. Each side advanced a technology of nuclear deterrents, in which the aggressor would be quickly attacked at the first sign of nuclear weapons deployment. Realizing that their wall of heavy-metal protection could easily result in their total annihilation, both countries engaged in a campaign strategy of psychological warfare, subversive activity and a tangled network of spy versus spy. Open Cold War conflicts were confined to the smaller, less-developed countries of the Mideast, Asia and in Latin America.

Sitting on the sidelines, menacing in its policies of non-communication, was the powerful country of China. While it was also communist, China had split from Russian ideology of Leninism/ Marxist interpretation to Maoism/Marxist doctrine. The split became exaggerated when China began seeking to replace the Lenin philosophy as the world’s interpretation of communism and when Russia began deviating from Stalinism.

During the upheaval of the 1950’s and 1960’s, China’s leader, Mao Zedong, proposed an aggressive, more militant attitude toward the Western countries, rejecting the ideas of Nikita Khrushchev that the capitalist and communist countries could co-exist. Zedong perceived the diplomacy of Khrushchev as the work of a communist revisionist and contrary to the ideals of Marxism. 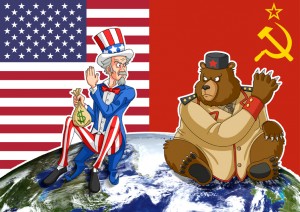 The sharp division in ideologies came to a head in 1962, during the Cuban missile crisis. With the failed Bay of Pigs invasion in 1961, an effort by the CIA para-military troops to remove the Communist leader, Fidel Castro reached an agreement with Russia. The Soviet Union would place missile bases to deter further US intervention. The agreement was stimulated, in part, by the recent presence of American Jupiter missiles staged in Italy and Turkey, with Moscow within range.

When US spy planes confirmed the Russian missile bases had been established in Cuba, the US established a military blockade and demanded that the weapons be dismantled. The world was held in tense captivity for thirteen days as the Cold War gained steam; each day counting down the minutes to a possible nuclear war. A series of rapid negotiations began between Russia and the US, ending with an agreement that Russia would withdraw its weaponry if the US would never again try to end Cuba’s government forcibly. Secretly, the US also dismantled its Jupiter missiles in Italy and Turkey, as the project was not then known to the public.

The event caused the US and Russia to create a special hotline, where communications could be set up quickly to reduce further tensions. Khrushchev announced this was a clear indication that peaceful resolution could be found. Zedong felt the Soviet leader was a traitor to their cause.

The hotline enabled more fruitful negotiations between American and Soviet leaders, including policies in arms control and the Vietnam conflict. The US, however, decided to drive the wedge in deeper between the two communist power houses. In 1972, US President Nixon paid his first visit into China.

When it Takes Three to Tangle 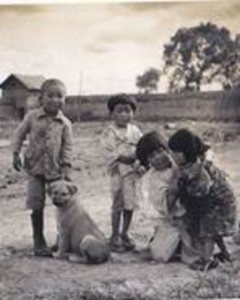 Nixon’s initial trip into China was motivated by the desire to make sure the two communist super powers never did form a common agreement with each other. The objectives stated; a peaceful settlement of the Taiwan crisis and a peaceful settlement of the Vietnam war; were never realized. Taiwan continues to face a military threat from the Republic of China, and the Vietnam War was settled by its own people with the aid of China as Nixon began with-drawing troops shortly after his initial visit. The trip, however, did create an unforeseeable new economic landscape. As relationships between the US and China thawed, China began opening its doors to foreign investors and gave permission to entrepreneurs to start business. At the same time, Russia, with a largely regional based economy, began to falter.

There are various reasons stated for the collapse of the Soviet Union. A large concentration of its economy had gone into the expansion of its military forces and technology. Many of its natural resources, such as mining, were under-developed. A new mood had taken over the Union; one of more liberal interpretations of government ideologies and policies and of independent nationalist movements. A series of conflicts riveted throughout the nation between 1988 and 1989. In 1990, the Communist Party for the Soviet Union gave up its seventy year old monopoly of political power and held its first competitive election involving all fifteen of its constituent republics. The CPSU lost in six of the voting republics.

Although perhaps not in the manner he intended, Nixon’s trips to China defused the Communist threat. The country that had once advocated active militarism against capitalists, was about to show the world how well it was able to perform in capitalistic ventures. The country that had appealed for peaceful co-existence, underwent a metamorphoses from a Stalinist state, to a series of independent nations exercising their power of vote.

China and Russia were never on the best terms throughout the Cold War period. Along with differences in interpretation of Marxism, there were territorial skirmishes and other policy disagreements. Analysts sometimes perceived China as the patient giant, waiting for an inevitable war to break out between the United States and Russia, and ready to swoop in among the pieces.

The Soviet Union was enormous in size. It covered one- sixth of the world’s land mass, making it nearly the same size as the entire continent of North America. It rivaled the United States in military strength and space technology. Russia was feared, but China entered public television screens with a different perspective.

For the first time in twenty years, America was able to see live footage in China. What they saw was a primarily rural people engaged in labor, living much as they had during the 1930’s. China was quickly absorbed into the commercial landscape. As China gained knowledge of American electronics, technology and fashions, manufactured products from Korea, Malaysia and Latin America were slowly eased out in preference for the lower costs involved in Chinese goods. It began taking active part in global enterprise. It began quietly and patiently building its economic empire. 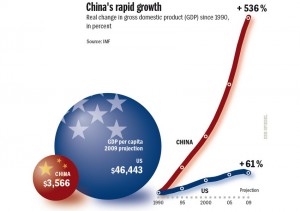 According to mathematicians, numbers don’t lie. The strength of a country is demonstrated in its Gross Domestic Product. Its successful governance is illustrated in its consistency in paying back debt, in generating profits, in its ability to lend money and invest in natural resources. Currently, China is considered the strongest economy in the world. Its investments in the United States alone amount to $14 billion. Its industry includes energy, mining, real estate and transportation, with a high concentration of its development projects scattered throughout Africa and the Mideast.

Deja Vu with a Twist

Even with the dissolution of the Soviet Union, Russia is still an imposing country. Its shrunken size still covers one-eighth of the world’s land mass. It shares borders with fourteen countries and maritime waters with the US and Japan. It rose out of its economic crash within ten years, running a strong surplus trade in oil revenues by the year 2000. During the global real estate crash, Russia never flinched. Russia had begun to rely more on barter than on the banks, which left a much lighter impact on producers. The domestic industries had benefitted from Russia’s economic slump as the prices of imported goods became too steep for the public to afford. Unemployment dropped and consumer demands for Russian goods and services began to rise.

According to the numbers, Russia is a self-sustaining nation, a strong bloc of influence with very little need of Western banks, Western technology or Western products. Trade agreements with Western countries have largely been matters of convenience and mutual benefit. They were engineered in the spirit of peaceful resolution.

Placing sanctions on Russia was like telling an independently wealthy contractor you’re not going to do business with him anymore. It may cause some discomfort. Amenities you had both grown to enjoy might be lost in your dissociation, but it’s not going to destroy either business. As the largest country in the world with a vast number of natural resources, its own advanced technologies and intellectual property, Russia has a lot to offer, particularly in energy, which is China’s number one investment.

We are staged for another Cold War, with the same three players, although this time the script is written differently. Russia and China are moving closer together, while the United States drops to the sideline and contemplates its waning political/economic clout. 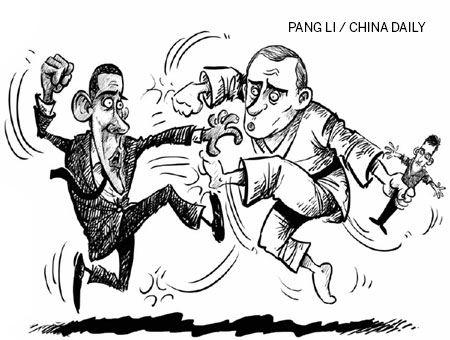 The United States is faced with a new dilemma. Like the Soviet Union, before its collapse, a large portion of its funding has gone into its military complex and very little into the infrastructure of its social system. Its union is fractured by civil disaccord and rumbles of dissolution. Its torn between ideologies.

Like Russia, it may go through a metamorphoses. It may take a closer look at its values, determining the aspects of common good and individual needs. It may concentrate more on developing its domestic products and rely less on imports. It may incorporate a system of barter, with less reliance on banking. It may realize that this particular monopoly game is over, and it’s time for a new round.

It could sit on the sidelines and wait for Russia and China to fail. It could anticipate a break-down in negotiations between these two super-powers and prepare to swoop up the pieces. It could remain doggedly uncommunicative with Russia or quarrel over the country’s every statement, in which case, there will be no peace. It will be a long, drawn-out and suppressive period of military activity, a stagnating society, a struggling economy and civil unrest.

Karla Fetrow: We are entering another Cold War, with the same three players, only this time the script has been changed.