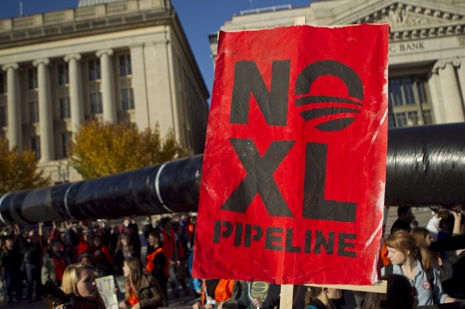 Texans have been suffering enough environmental damage.  A series of 22 small earthquakes; the last one a 2.7 murmur that occurred in early August, left residents uneasy about the supposed prosperity that gas fracking was to bring to Texan residents.  More than 134 quakes have occurred in mid-Texas, near the Barnett and Ford Eagle gas deposits; an unprecedented amount of activity in an area that is not generally prone to earthquakes.  It seems, however, the problem has only just begun for those seeking a clean, healthy environment for Texas growth.  Construction of the Trans Canada Keystone XL pipeline is scheduled to begin near Livingston, Texas, and the residents are saying no.

Trans Canada intends to build a 1,179 mile oil sands pipeline across the United States to oil refineries in Texas.  Some of the most recent resistance came from Nebraska when residents opposed the route of the pipeline through the ecologically sensitive Sand Hills region.  While the section has since been rerouted to cut through Oklahoma, Nebraska Governor, Dave Heineman urged that the pipeline be built quickly, stating it would create jobs and reduce American dependence on Mideast oil.

Opponents to the pipeline project say additional oil for the US is a misleading statement.  Once the oil has been refined at Texas plants, it will be shipped overseas.  Nor is the pipeline very popular with the Native Americans whose homes would be within a circumference of the refineries’ noxious fumes.  Stated Cherokee activist and Grand River Keeper Earl Hatley, who is co-founder of Clean Energy Future Oklahoma. “The pollution killing First Nations peoples [in Canada] and destruction of their culture by greedy multi-national oil barons is akin to the long ago practice of providing small pox blankets to our people here in America.” 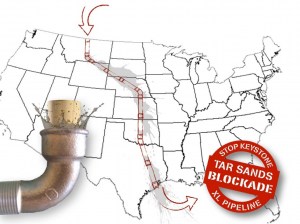 In 2010, Michigan joined the anti-tar sands protests after a rival pipeline project, Enbridge, experienced a rupture in their pipeline, sending over a million gallons of unrefined oil into the water ways of southwestern Michigan.  The damage exceeded 100 million dollars, according to EPA estimates.  State and federal officials commented it would take months to completely clean the damage and years of monitoring for potential air and groundwater pollution.  Enbridge was not concerned.  The company stated it would learn from the Michigan disaster and increase their safety procedures.

While environmental concerns are weighing heavily on the opponents of tar sand development, it’s not the only reason Texan citizens are riled up.  Twelve hundred people were arrested last year during a two week sit-in next to the White House in protest of the pipeline construction.  The protestors were comprised of environmentalist activists, tea party members, ranchers and Occupy members, all putting aside their differences to link arms in a civil disobedience demonstration against the proposed Keystone XL project.

An active participant in what has come to be known as the Tar Sands blockade, is land owner, Susan Scotts..  Her campaign began when Trans Canada chose a route that would cross the path private land held by ranchers, farmers and other land owning citizens.  Fearful of being sued, many of the land-owners signed the contract that would give the pipeline right of way across their holdings, but Susan Scotts refused.  This did not stop the powerful company from claiming eminent domain.

Scotts states Keystone XL has lied to her since day one.  “I worked 37 years for my farm,  and TransCanada believes it is entitled to a piece of my home.” Susan’s home was recently condemned.

The battle against pipeline construction began in earnest on August 17th, when organizers and protesters began setting up camps in the way of pipeline construction.  Typically,  the organized protest received little to no coverage by the mainstream media, despite a vast network of supporters for the tar sands blockade.  Targeting Livingston, Texas, protesters managed to hold up construction for an entire day, when on August 28th., they chained themselves to the axle of a semi-truck carrying 36 inch pipes for the intended pipeline.  According to blockade supporters, arresting the citizens involved removal of the truck’s bumper.

Even the construction crew demonstrated sympathy for the peaceful demonstrators, bringing them cups of water throughout the afternoon.  On August 29th., seven activists were arrested.

It was the mistreatment of landowners that has caused this unity between organizations and committees that generally don’t find common cause.  Julia Crawford, one of the land owners who had not signed a contract of consent for the pipeline, has taken her case to court, challenging the Trans Canada’s right to eminent domain.

Trans Canada applied for this right as a common carrier, a status usually given to the Texas Railroad Commission, which, in the eyes of many, is nothing more than a legal avenue for stealing private property through eminent domain.  In order to become a common carrier, all Trans Canada had to do was fill out a government form, known as a T-4 form,  and check a box marked, “common carrier”.

Said Houston businessman, Ray Torgerson, who supports the blockade,  “The fact that this corporation can check a box on a form and steal someone’s land is insulting,  “We are here to defend our homes and stand with landowners like Julia.”

Members of the Tar Sands Blockade acknowledge it will be a long battle, but they are optimistic.  Recent coverages of their efforts have appeared in the Washington Post, Truth-Out and Eco Watch.  They feel their campaign is necessary for environment reasons, the protection of indigenous communities, and the rights of citizens whose homes are in the way of the project.

They point out that President Obama has backed out on another of his many promises to promote green energy by hurrying the pipeline project along, despite an incomplete assessment of the environmental impact the oil sands refineries would entail, or the risks involved in the case of a pipeline spill.  Texas is getting tough, warning legislators and officials not to mess with it, while at the same time, it must cause a perverse delight that for once, citizens opposed to dirty sand oil can state, “blame Canada”.

Karla Fetrow- The Trans Canada Keystone XL pipeline is by no means popular among Texan citizens who state their property is being stolen.