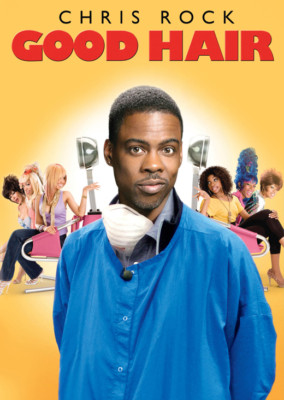 Most Stars seem to reach a certain age when they start having children and want to connect with their kids.  Madonna pushed out a couple of crappy tea party books for children, Ice Cube started making some family movies his kids could watch, Brad Pitt became the voice of a superhero.  But Chris Rock did a little something different.

He says he went on a quest, when his daughter came in and asked “Daddy, why don’t I have ‘Good Hair’.” To find out what he could about the Billion dollar industry of Black Hair Products.  The result is Good Hair.

The film kept my attention for several reasons.  Chris Rock mostly took off his comedian hat and donned a pretty nice investigative journalism one.  He visited a factory owned and operated by African Americans where relaxer or “creamy crack” is made.  He went to India to check out where the bulk of hair for extensions is harvested and visited Krishna’s temple to witness the tonsure ceremony in which the vanity of hair is given up; so the temple can sell it to the highest bidder and it can go on African American Heads.  Of course he visited a lot of Barber Shops and Beauty Salons, as well as pulling in some of his celebrity friends.

All this made me think about my own experiences with Black hair.  My daughter was born into a well mixed family.  She had an equal amount of cousins with “good hair” and “bad hair.”  Just for clarification “good hair” is manageable, brushable hair.  “bad hair” is considered nappy hair, hair that is curlier, harder to manage, doesn’t grow down and long but grows up and out.

When she was born her hair was so fine and so straight and she herself so light colored that her father actually gave me a look or two when he noted how light she was.  She grew into her color and into her hair.  She had inherited the fine texture of my hair and the incredible curl of her father’s hair.

Now, I actually thought I had a handle on managing black hair.  For years I had cut relaxed, braided and put extensions into her father’s hair.  Although he loved to play with his hair, I secretly loved the short tight cuts.  The thick curls as they just left the head smoothing and curling on his head.

However I was not at all prepared for the variance in hair.  The unique combination our daughter had been blessed with gave her the most curly mop of hair I have ever seen.  In sixth grade, when she was done with letting me brush it, it became unmanageable and I finally gave in and took her to the hairdresser, the only black hairdresser that didn’t work out of her kitchen in our community at the time.

I learned there was a lot I didn’t know about Black hair.  What I learned and paid for over the next ten years was a lot.  We went through relaxers and irons and braids.  Thankfully she never needed nor wanted a weave because I almost lost my breath when I learned how much they cost to get and keep up.

This film is a couple of years old, it débuted at the Sundance Film Festival in 2009.  So after I watched it I was interested in seeing what kind of response it had been getting.

I learned it was now shown in beauty schools to would be cosmologists.  I learned that Sodium Hydroxide which is the main chemical will eat through chicken skin almost immediately and decimate a soda can in three hours.  I learned that people were surprised Chris Rock could be un-funny.  But most interesting to me were the lines drawn around this issue.  A good portion of African American women were pissed off.

One of the reasons was fairly obvious.  Chris Rock had told some of their secrets.  While a growing industry around all nationalities getting hair weaves and extensions has pretty much let us all know that a lot of women’s hair wasn’t real, or strictly speaking; theirs.  This movie took a lot of the feminine mystery away.  No matter whom we are we all like our level of mystery.  That “how does she/he do it?” feeling.

But one of the things the women reacted to the strongest was some unflattering truths that the film revealed.  For example, at one salon in a working class neighborhood, the “Weavologist” quoted a weave from her at starting around $1000.00.  That’s out the door; not including maintenance like cuts, bi-monthly washing and setting and any emergencies that arise like say, you got it wet.  She had even set up lay-away plans for her client’s hair requirements. Reverend Al Sharpton responded to the cost of weaves in his interview by saying women were neglecting needs in favor of wanting to look a certain way and needed to put their budget in perspective.  Several men stated there had been women that they knew they couldn’t afford due to their hair.

Bloggers, reporters and everyday people took to their computers to dispel this idea right away.  They were affronted at the Reverend Al Sharpton’s statements that women he had known had skipped house payments in favor of European-like hair.  Indeed, the idea of their hair being European at all really pissed them off.  Perhaps it should, as it almost certainly was Asian hair anyway.

The point I think the detractors were trying to make but I think were too angry to connect was this was a man, investigating a mostly woman’s world.  They maybe weren’t ready for what the men interviewed would say and take away from it.  I think it’s telling.

Men for the most part weren’t mystified as to why they couldn’t touch their partner’s hair or even why the women in their lives submitted to all this fuss.  They really got it; it was about them feeling good, powerful and attractive.  This is something we all want in our own ways.  What they seemed to be most frustrated about was the way it separated them in their relationships.  This was a line they could not cross.  There is no negotiation about hair in most of the African American community.  A lot of the men I think would have been just as happy if their partners went natural.

Natural is what my daughter ultimately decided on in her adult life.  She gets people from children to old women who want to touch her hair.  It is something she has had to get used to.  I can remember her coming home from school some days tired out from all the attention lavished on her hair by her white friends.  She would lay her head in my lap, but we all knew she did not want it played with.  She is older and much more giving now and smiles a lot as children run their hands through her unique soft curly auburn hair;  Hair that curls around your fingers like a living thing and very often comes away with you a little bit.

Another of the nastier things said about Chris Rock was that he needed to have his girls hanging out with more African Americans, less Hollywood white folk. Strange but my daughter grew up until her teen years with only one African friend, she never once thought her hair wasn’t “Good Hair.”   Also I think this completely misses the mark of what he set out to do.

Ultimately this film is a love letter to his daughters.  He shows his strong commitment as a father of female children wanting to find out all he can so he can help guide them through the choices they will make that will make them feel beautiful, powerful, and glorious.  We should all want such good things from our fathers, husbands and partners.