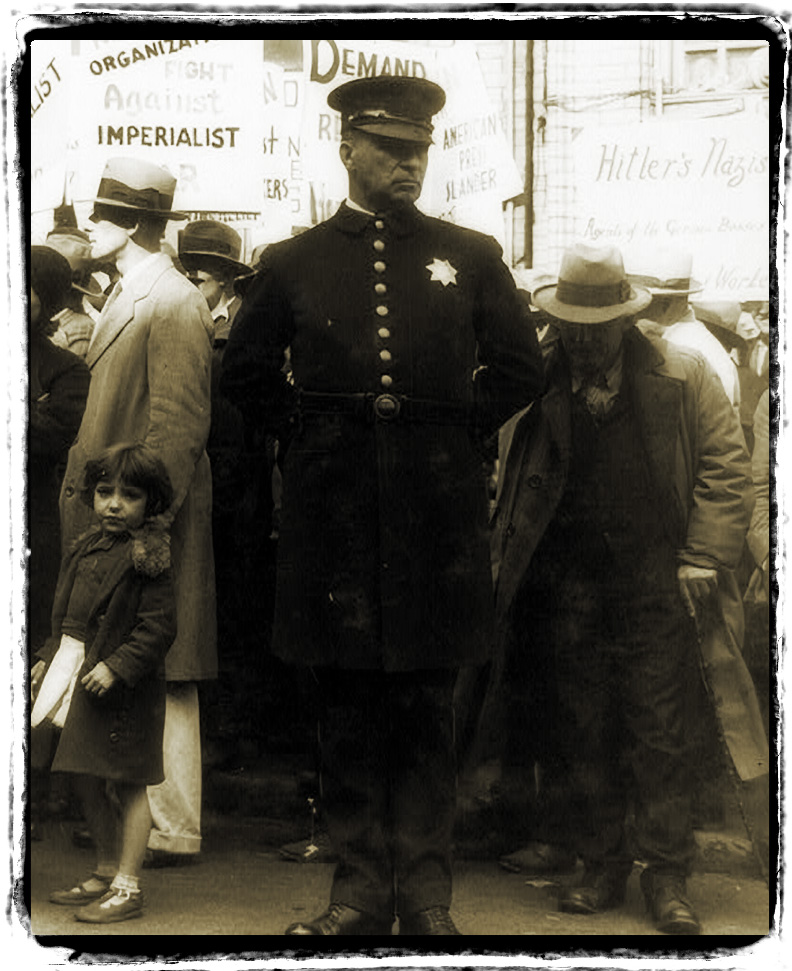 In my estimation, nobody sells socialism better than conservatives and their shamed cousins, The Randroids/ Lonneytarians, and the Teabaggers (the oft rightfully maligned racist stepchild of American politics). For example, by labeling “socialist” every policy that actually does people any good, they are actually making a convincing case that socialism must be a good thing.

Personally, I believe in mixed economies. The empirical proof shows that the market is a miserable failure when it comes to health and education, for example. And unfettered capitalism is a huge failure (see here and here. It’s also not good for long-term research and development. While I am no fan of the “market,” and am painfully aware there’s no such thing as a “free” market, I’m also not going to throw it under the bus. In my world, the market would be reasonably regulated and not seen as a cure-all for social ills. The following has been glommed from the Democratic Socialists of America (click here)…
* * *

Democratic socialists believe that both the economy and society should be run democratically — to meet public needs, not to make profits for a few. To achieve a more just society, many structures of our government and economy must be radically transformed through greater economic and social democracy so that ordinary Americans can participate in the many decisions that affect our lives.

Q Doesn’t socialism mean that the government will own and run everything?

Democratic socialists do not want to create an all-powerful government bureaucracy. But we do not want big corporate bureaucracies to control our society either. Rather, we believe that social and economic decisions should be made by those whom they most affect.

Today, corporate executives who answer only to themselves and a few wealthy stockholders make basic economic decisions affecting millions of people. Resources are used to make money for capitalists rather than to meet human needs. We believe that the workers and consumers who are affected by economic institutions should own and control them.

Social ownership could take many forms, such as worker-owned cooperatives or publicly owned enterprises managed by workers and consumer representatives. Democratic socialists favor as much decentralization as possible. While the large concentrations of capital in industries such as energy and steel may necessitate some form of state ownership, many consumer-goods industries might be best run as cooperatives. Democratic socialists have long rejected the belief that the whole economy should be centrally planned.

While we believe that democratic planning can shape major social investments like mass transit, housing, and energy, market mechanisms are needed to determine the demand for many consumer goods.

Q Hasn’t socialism been discredited by the collapse of Communism in the USSR and Eastern Europe?

Socialists have been among the harshest critics of authoritarian Communist states. Just because their bureaucratic elites called them “socialist” did not make it so; they also called their regimes “democratic.” Democratic socialists always opposed the ruling party-states of those societies, just as we oppose the ruling classes of capitalist societies. We applaud the democratic revolutions that have transformed the former Communist bloc. However, the improvement of people’s lives requires real democracy without ethnic rivalries and/or new forms of authoritarianism. Democratic socialists will continue to play a key role in that struggle throughout the world.

Moreover, the fall of Communism should not blind us to injustices at home. We cannot allow all radicalism to be dismissed as “Communist.” That suppression of dissent and diversity undermines America’s ability to live up to its promise of equality of opportunity, not to mention the freedoms of speech and assembly.

Q Private corporations seem to be a permanent fixture in the US, so why work towards socialism?

In the short term we can’t eliminate private corporations, but we can bring them under greater democratic control. The government could use regulations and tax incentives to encourage companies to act in the public interest and outlaw destructive activities such as exporting jobs to low-wage countries and polluting our environment. Public pressure can also have a critical role to play in the struggle to hold corporations accountable. Most of all, socialists look to unions make private business more accountable.

Q Won’t socialism be impractical because people will lose their incentive to work?

We don’t agree with the capitalist assumption that starvation or greed are the only reasons people work. People enjoy their work if it is meaningful and enhances their lives. They work out of a sense of responsibility to their community and society. Although a long-term goal of socialism is to eliminate all but the most enjoyable kinds of labor, we recognize that unappealing jobs will long remain. These tasks would be spread among as many people as possible rather than distributed on the basis of class, race, ethnicity, or gender, as they are under capitalism. And this undesirable work should be among the best, not the least, rewarded work within the economy. For now, the burden should be placed on the employer to make work desirable by raising wages, offering benefits and improving the work environment. In short, we believe that a combination of social, economic, and moral incentives will motivate people to work.

Q Why are there no models of democratic socialism?

Although no country has fully instituted democratic socialism, the socialist parties and labor movements of other countries have won many victories for their people. We can learn from the comprehensive welfare state maintained by the Swedes, from Canada’s national health care system, France’s nationwide childcare program, and Nicaragua’s literacy programs. Lastly, we can learn from efforts initiated right here in the US, such as the community health centers created by the government in the 1960s. They provided high quality family care, with community involvement in decision-making.

For over half a century, a number of nations in Western Europe and Scandinavia have enjoyed both tremendous prosperity and relative economic equality thanks to the policies pursued by social democratic parties. These nations used their relative wealth to insure a high standard of living for their citizens — high wages, health care and subsidized education. Most importantly, social democratic parties supported strong labor movements that became central players in economic decision-making. But with the globalization of capitalism, the old social democratic model becomes ever harder to maintain. Stiff competition from low-wage labor markets in developing countries and the constant fear that industry will move to avoid taxes and strong labor regulations has diminished (but not eliminated) the ability of nations to launch ambitious economic reform on their own. Social democratic reform must now happen at the international level. Multinational corporations must be brought under democratic controls, and workers’ organizing efforts must reach across borders.

Now, more than ever, socialism is an international movement. As socialists have always known, the welfare of working people in Finland or California depends largely on standards in Italy or Indonesia. As a result, we must work towards reforms that can withstand the power of multinationals and global banks, and we must fight for a world order that is not controlled by bankers and bosses.

Q Aren’t you a party that’s in competition with the Democratic Party for votes and support?

No, we are not a separate party. Like our friends and allies in the feminist, labor, civil rights, religious, and community organizing movements, many of us have been active in the Democratic Party. We work with those movements to strengthen the party’s left wing, represented by the Congressional Progressive Caucus. The process and structure of American elections seriously hurts third party efforts. Winner-take-all elections instead of proportional representation, rigorous party qualification requirements that vary from state to state, a presidential instead of a parliamentary system, and the two-party monopoly on political power have doomed third party efforts. We hope that at some point in the future, in coalition with our allies, an alternative national party will be viable. For now, we will continue to support progressives who have a real chance at winning elections, which usually means left-wing Democrats.

Q If I am going to devote time to politics, why shouldn’t I focus on something more immediate?

Although capitalism will be with us for a long time, reforms we win now—raising the minimum wage, securing a national health plan, and demanding passage of right-to-strike legislation—can bring us closer to socialism. Many democratic socialists actively work in the single-issue organizations that advocate for those reforms. We are visible in the reproductive freedom movement, the fight for student aid, gay, lesbian, bisexual and transgendered organizations, anti-racist groups, and the labor movement. It is precisely our socialist vision that informs and inspires our day-to-day activism for social justice. As socialists we bring a sense of the interdependence of all struggles for justice. No single-issue organization can truly challenge the capitalist system or adequately secure its particular demands. In fact, unless we are all collectively working to win a world without oppression, each fight for reforms will be disconnected, maybe even self-defeating.

Q What can young people do to move the US towards socialism?

Since the Civil Rights movement of the 1950s, young people have played a critical role in American politics. They have been a tremendous force for both political and cultural change in this country: in limiting the US’s options in the war in Vietnam, in forcing corporations to divest from the racist South African regime, in reforming universities, and in bringing issues of sexual orientation and gender discrimination to public attention. Though none of these struggles were fought by young people alone, they all featured youth as leaders in multi-generational progressive coalitions. Young people are needed in today’s struggles as well: for universal health care and stronger unions, against welfare cuts and predatory multinational corporations. Schools, colleges and universities are important to American political culture. They are the places where ideas are formulated and policy discussed and developed. Being an active part of that discussion is a critical job for young socialists. We have to work hard to change people’s misconceptions about socialism, to broaden political debate, and to overcome many students’ lack of interest in engaging in political action. Off-campus, too, in our daily cultural lives, young people can be turning the tide against racism, sexism and homophobia, as well as the conservative myth of the virtue of “free” markets.

Q If so many people misunderstand socialism, why continue to use the word?

First, we call ourselves socialists because we are proud of what we are. Second, no matter what we call ourselves, conservatives will use it against us. Anti-socialism has been repeatedly used to attack reforms that shift power to working class people and away from corporate capital. In 1993, national health insurance was attacked as “socialized medicine” and defeated. Liberals are routinely denounced as socialists in order to discredit reform. Until we face, and beat, the stigma attached to the “S word,” politics in America will continue to be stifled and our options limited. We also call ourselves socialists because we are proud of the traditions upon which we are based, of the heritage of the Socialist Party of Eugene Debs and Norman Thomas, and of other struggles for change that have made America more democratic and just. Finally, we call ourselves socialists to remind everyone that we have a vision of a better world.
* * *
My name is Eddie and I’m recovery from civilization… 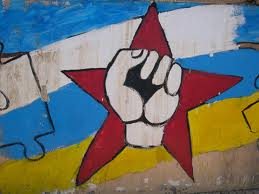 Edward SantoPrieto: While we believe that democratic planning can shape major social investments like mass transit, housing, and energy, market mechanisms are needed