The clouds rained up yesterday.  I pointed that out as we were driving down the highway, “look, the clouds are upside down”.  It was kind of marvelous to see, these splayed vapor trails curving upwards, instead of down.  They were sprinkling the heavens.  “Technically,” the mean little scientist said, “It’s not the heavens, just the mirrored surface of the atmosphere.”  We get blue because of that distinction; blue sky, blue ocean.  It was his habit to remove the romance from facts.

It rained up.  Somewhere it had to rain down.  It wasn’t our business to know where, but the tornadoes are raging in Alabama and the water spouts twirl in Hawaii, and we’re all wondering why it’s going up and what’s going to happen when it comes down.

We decided to camp out on a ledge that swept out from a grassy plateau, giving us a full view of the bay.  The sun paused thoughtfully in the sky, as though debating whether to pass under the distant mountain peaks or climb over.  It blushed with embarrassment, sending its ruddy colors streaming over the inlet.  It seemed like a good time to practice Tai Chi.  The thing about Tai Chi is, you can’t just go through the motions.  You have to breathe them in.  You have to be the same intake and withdrawal of energy as the waves lapping at the shore.  You breathe and you make little invisible sun balls that you push out with your hands.  These negative things that bring you down.   They roll up in balls and go somewhere, maybe wherever the rain is falling.  It seemed almost wicked, this big clear sky pushing aside all the bad things and dropping them down somewhere else.

When the tide goes out, a chill wind springs up.  It scoops up the hot day, the borderline tempers, the racket that had somehow followed us in from the city and sweeps them into the sea.  We decided it was time to make a campfire.  “A proper one,” I insisted.  “Make a fire pit first.  The grass is dry.”

The grass is dry and waving, left over from winter.  Tiny green shoots are pushing up from underneath.  We found some rocks; some wonderful rocks actually; to line our pit, quartz heavily sprinkled with mica, lava stones both grey and red, but the mean little scientist was already decorating it with sticks and shells.  “You can’t build your fire pit here,” he said.  “I’m practicing my zen.”

“You didn’t join us for Tai Chi,” I observed, allowing him his zen.

“I’m doing my own breathing.”

“I think you need to decorate your rock garden better,” said Anna.  I agreed.  We added a few of our favorite stones and some dried up flowers.

“You ruined it,” said the scientist.

It wasn’t a proper rock garden.  The decorations of sticks and stones were asymmetrical in places, in others, haphazard.  I rearranged it and the scientist groaned.  “You’re killing me.”

It didn’t matter what any of us thought.  The dogs romped through it, spoiling the design.  “We’ll have to be satisfied with a zen fire.”

The fire was perfect, a zen marvel.  While the sun bled along the sharp points of the mountains, and the wind rustled, the fire snapped and sent fairy like embers scattering in the air.  Our eyes drew into the flames, breathing in, breathing out, whispering stories that we all knew along the edges of our consciousness.  The chill crept deeper while the fog gathered, rolling like a carpet, waiting for the tide to come back.  The young mother had wrapped her baby tightly, but her own shoulders were shivering.  “I have a nice Indian blanket you can use,” I offered.

She shook her head.  “I’ll just put on my coat.  I never could stand to wrap in a blanket.”

“I always wrapped up with my children in a blanket when they were babies,” I said.  “There was just something very warm and comfortable about it.”

“Now, see here,” said the mean little scientist, who was my son, grown now and not at all little.   “That’s where you went wrong.  It wasn’t enough that I was brown, you had to advertise it.”

I had to see him then, the child who had become a man.  I hadn’t really gone wrong.  He stood proud as a warrior, solid as a wall.  He liked pretty girls  and pretty girls liked him.  He was the dude.  He played nice.  The guys all buddy shook his hand and respected him.    Slipping between the long hours of summer, I had not noticed the time moving by.  One summer became all summers, and the shouts and cries of childish discovery all the triumphs of those endless days.  The radio played a song and I was sixteen… twenty-seven…. a mother just noticing her son had grown.  Still, I laughed.  “I’m sorry.  We all make mistakes.”

It was the first soft sigh of summer, the first evening that wasn’t evening.  A fur-like twilight settled for an hour or so before the sun returned, twinkling, did you miss me?  Oh, did you miss me?  The hours blend together at times like this and you don’t remember if it’s been one day or three.

We slept while the sky turned pale and the tide came in again, bringing back a dimpled morning.  The toddler worked on the Zen garden.  When he was done, there was something right about it.  What the dogs had scattered, the wind had brushed, and the child piled rock after rock close together.  It was order within disorder, balance in aimless purpose.  “Someone will add to the garden when we’re gone,” I said.  Everyone agreed.

It was the last time we were in agreement.  There was a war between us, a silent one that was not so much about what we wanted to do together, but our individual desires.  There were those who wished to stay at that wind-swept plateau, and those who wished to push on.  The afternoon grew drunk with quarrels and the evening fumed with bitterness.

“I spent the last of my money on groceries,” said one.

“You are so mean,” said the sister of the Irish girl who was taking it all out on the scientist.

We were all so mean, leaving the spot finally where our tempers had boiled, nobody feeling a sense of real victory.  Stretched out like an opening hand, was the silvery road, so we traveled.  The sea gulls laughed.  The rivers danced and played and the ocean muttered, “it was so long ago, long ago, long ago.”  Our hearts gentled.

Funny about zen.  It’s a letting go, a non-resistance, a surrender to what can’t be changed, an awareness of what is changing.  I had struggled to make the day mine, to shape it to my will, but it became a day of its own choosing.  It climbed from meaningless to its own meaning.  We visited my brother before returning home.  He had created a Zen garden.  “It’s the stones,” said his wife.  “I go down to the beach and I can’t stop gathering stones.  I need them.”  She saw things in the stones, rivers running through valleys, cats crouching in the bushes, smiling faces.  She piled them up for walkways and monuments, symbols within symbols.

The workers had come while I was gone, hauling away the old automobiles that had sat rusting in the back lot of the property.  They hadn’t charged me for their labor.  All they wanted was the steel.  That’s how it was these days.  At one time, you had to pay to have your old, broken down cars hauled off.  There was no profit in owning a junk yard.  Times have changed.  The recycled steel is valuable.  Perhaps, I could have held out and even gotten a price for all things metal, dead and dying, but that’s not the way it works anymore.  We give services for services, as money has so little value.

The cars were gone.  In their place was a smooth, raked patch of clean earth.  I began to dream happily again about strawberries, lilac bushes and lilies.  A young boy was busily cleaning the debris within the narrow cultivated strip and the freshly scraped landscape, moving a pot with a bravely struggling shrub here, another one there.  “Come,” he said.  “Look what I’ve done for you.”  I followed. 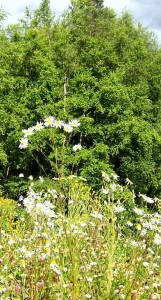 I followed him to the tip where the strawberries and perennials ended and the picnic area spread out, broader now with no hindering metal structures blocking the march of the long, rolling grass.  Stone piled upon stone, and in between their crevices, budding young plants peaked coyly out.  Some logs had been rolled together, marking its dimensions.  The strawberries sighed and stretched their tendrils.  The May Day tree bloomed, wafting its fragrance and the sun twinkled merrily.  I had struggled to make the day mine, but when I let go, it had become everyone’s.

Somewhere it rained down and rivers flooded.  Back in the city, tempers mounted as desire and will outsourced each other.  They all wanted the day to be their own.  They wanted the rain to stop or the sun to quit beating at their door.  They wanted what they wanted; their designed order, their great perfection, while our summer turned sweet and golden.  The rains fell gently and the flowers opened.  I opened with them, welcoming this gift of unknown tomorrow.  My brother suspected, the youth realized and the mean little scientist knew all along, we live in a Zen garden.

Karla Fetrow- Zen is a letting go, a non-resistance, a surrender to what can’t be changed, an awareness of what is changing. I had struggled to make the day mine

The Day of Judgement