The Reanimator: The Return of Voodoo Economics 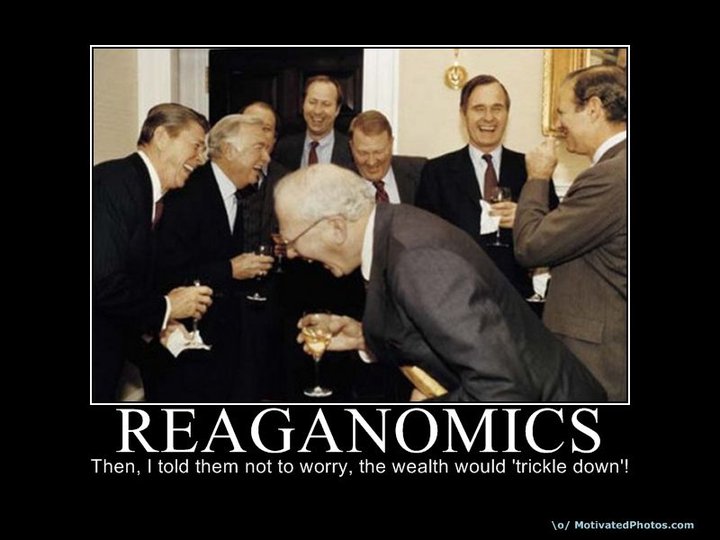 What we might call, by way of eminence, the Dismal Science.

Spurred by the results of the recent mid term elections and what looks like a return to the Reagan Kool Aid, I called my friend who works on Wall St. My friend is a dyed-in-the-wool conservative who majored in economics. His wife, bless her soul, doesn’t like me too much believing that my views should be enough to keep me locked up for life (or at the very least, excommunicated).

Anyway, I’m not very bright when it comes to economics and finances, I believe my ex-wife is correct in her observation that I should never be allowed to handle my own finances, let alone talk about them. Whenever I have a question on economics, I usually call my Wall St. friend. Since the last Financial Meltdown, he hasn’t been returning my calls, but I was able to reach him recently and he agreed to talk to me on condition that I would never tell his wife and if I didn’t interrupt him with my “radical” views. I agreed and even offered to buy him lunch considering the radical state of market makes my “radicalness” look tame in comparison.

We met at a popular Wall St eatery and when we sat down, I immediately blurted out, “Laffer Curve! Tell me all about it!” That prompted a hush over the mid afternoon crowd — nervous glances from others in the restaurant. My friend begged me to lower my voice, “Eddie, things are pretty much volatile around here these days, please don’t start a stampede.”

I promised to be quiet and he began to tell me about this mysterious, all-powerful talisman — the Laffer Curve.

Now, keep in kind my friend, though a conservative, believes supply-side economics to be the biggest con ever perpetrated on the American public. He’s an “old school” conservative: conservatives that concerned themselves mostly about such things as deficits, inflation, and excessive spending; republicans who didn’t care much about cutting taxes and were quite willing (like Hoover and Ford) to raise taxes in order to balance the budget.

I always scoff at the quaint notion of such conservatives but my friend assures me that such men existed, but that they have become an endangered species (extinct?) as the GOP has essentially been hijacked by a cult.

“All sects have their founding myths,” my friend assured me, and the cult in question can trace its roots to a Holy Trio (like in Christianity!) that met in Washington, DC in late 1974. That trio consisted of Arthur Laffer, an economic consultant, Jude Wanniski, a high-strung Wall St. Journal editorial writer, and, yes, Dick Cheney, who was then Ford’s chief of staff.

Wanniski had no formal training in economics, but he had taken Laffer as his mentor. In retrospect, his choice of tutelage was curious. Laffer had been an economics professor at the University of Chicago since 1967. In 1970, a colleague brought him to Washington to serve as a staffer in the Office of Management and Budget (OMB). There he quickly distinguished himself by making a wildly unconventional calculation about the size of the 1971 Gross Domestic Product. President Nixon, always the opportunist, jumped on Laffer’s calculations because it was far more optimistic than other estimates and suggested an economic boom under his watch. Later, it was discovered that Laffer had used only four variables to arrive at his figure. My friend tells me that most economists used hundreds if not thousands of variables — inputs.

When his calculations turned out to be horribly wrong, he became the laughingstock of Washington. He left government in disgrace facing the disdain of his academic colleagues. Still, he stayed in touch with Wanniski, the two having met in Washington, and continued to tutor him in economics.

At this point, I gave my friend a patented Eddie ::blank stare::

My friend shrugged as if to say that no one can ever understand the underpinnings of human motivation and continued his story.

In 1972, Wanniski had an epiphany that led him to believe Laffer was a brilliant economist who had developed a blinding new insight that would turn the economic establishment on its head. Wanniski and Laffer believed that it was possible to simultaneously expand the economy and hold down inflation by cutting taxes, especially taxes for the wealthy. Respectable economists (even conservative ones) considered this laughable. Nevertheless, Wanniski was convinced of its truth. He promoted the doctrine through his high perch on the respected (and uber-conservative) Wall St. Journal Editorial Page and in articles in the equally conservative Public Interest (published by the Godfather of the Conservative Movement, Irving Kristol). Both were highly influential media outlets.

Still, Wanniski’s new doctrine, later to be called supply-side economics, failed to catch on beyond a few loyal devotees.

Then came that fateful Holy Night. Wanniski and Laffer were working hard with little success to explain the “new” theory to Cheney. At this point, Laffer pulled out a cocktail napkin and drew a parabola-shaped curve on it. The premise of the curve was simple. If the government sets a tax rate of zero, there’s no revenue. And if the government sets the tax rate of 100 percent, the government will also receive zero tax revenue, since there will be no incentive for anyone to earn any income. Between these two points — zero taxes and zero revenue, 100 percent taxes and zero revenue — Laffer drew an arc (the “Laffer Curve”). The arc suggested that at higher levels of taxation, reducing the rate would produce more revenue for the government.

At this point, Cheney could have raised several questions. First, he could have noted that the Laffer Curve was not… ummm … correct? Yes, a zero tax rate would obviously produce zero revenue, but the assumption that a 100 percent tax rate would produce zero revenue was categorically false. I mean, c’mon, I tell my friend, Cheney had to be familiar with communist Soviet Union, with its 100 percent tax rate.

My friend sighed, paused a moment, and patiently trudged on. While he assured me he’s no socialist, the soviet revenue scheme may not have been the model of efficiency, but it still managed to collect enough revenue to maintain an enormous military, enslave half of Europe, fund ambitious projects like Sputnik, and so on. Secondly, Cheney could’ve pointed out that even if the Laffer Curve was correct in theory, there was no evidence that the U.S. income tax was on the downward slope of the curve. My confused look prompted my friend to explain: that is there was no proof that rates were then high enough that tax cuts would produce higher revenue.

But Cheney didn’t do either of these things. Perhaps, in looking back, like most conservatives he liked theories that confirmed his ideological stances. You can almost picture Donald Rumsfeld drawing a Laffer Curve showing that only a small number of troops would be needed to occupy Iraq.

Whatever the case, Cheney saw the light and became an immediate convert. For Cheney the Laffer Curve provided an easy to understand frame for the messianic power of tax cuts. The significance of that Holy Night wasn’t that Cheney was converted, its importance was in the creation of a powerful symbol with which to spread the gospel of supply-side economics. The mantra was irresistible:

The Laffer Curve swept through the republican ranks like wildfire. Irving Kristol would write later, in almost religious terms, of the conversion of Ronald Reagan. And in that way, the totally untested and totally ideological notion that cutting taxes for the rich is always a good idea came to life. Call it an economic Immaculate conception.

That is how what Bush the Elder presciently termed “Voodoo Economics” came to being and it would go on to dominate U.S. economic policy for the next 20 years.

So, my friends, the next time one of the zombies start blurting crap about the “Laffer Curve” please know it was something that was literally pulled out of a failed economics professor’s hairy anus.

There’s more to this story, but this is already too long, but I love stories — especially myths. More to come…

Edward-Yemil Rosario: At a recent lunch I blurted out, “Laffer Curve! Tell me all about it!” That prompted a hush over the mid afternoon crowd — nervous glances from others in the restaurant. My friend begged me to lower my voice, “Eddie, things are pretty much volatile around here these days, please don’t start a stampede.”