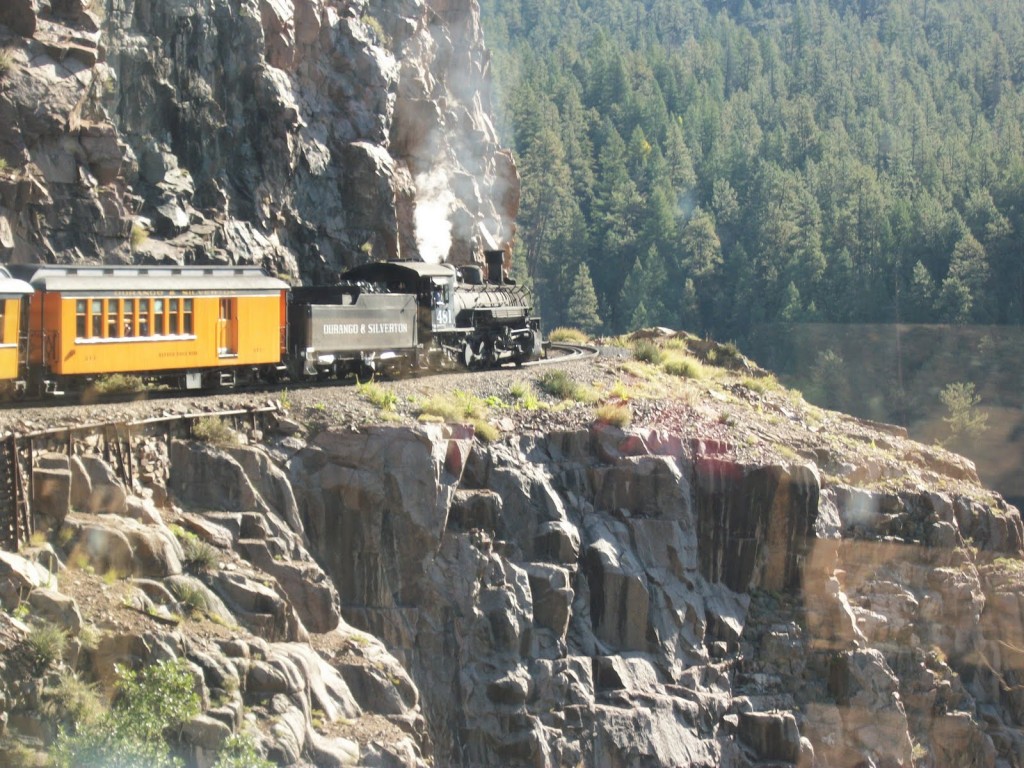 I just had the honor of riding the Durango-Silverton stream train.  Wow!  And just before the train pulled into to Silverton, I got into a discussion with a former mailman, another railroad buff.  “My father worked in the post office,” I told him, “back in the old days when everyone still sent out Christmas cards.  During the whole month of December, Pop was always at work — but it’s not like that any more since they invented the internet.”

“I myself was forced to quit the post office early,” said my new railroad enthusiast friend, “because of knee injures from walking my route for so many years.”  Yeah but — why didn’t you just get your knees treated?  Doesn’t the Post Office still have workers comp programs to deal with that kind of stuff?  Apparently not.

“No, it’s not like that any more.  In the past few years, the Post Office has been throwing people off workers comp left and right.  If you are injured on the job and you work for the postal service, you are basically [screwed].”  That fits the pattern of how too much of America’s money is getting vacuumed away into the pockets of oligarchs, out-sourcers, corporatists and supporters of unnecessary foreign wars instead of being used to take care of much more urgent business here at home.

Maybe it’s my imagination, but doesn’t it seem like every single cent that the federal government saves by cutting down on services to us taxpayers goes straight into the pockets of weapons manufacturers, corporate welfare queens, advocates of “globalization” and Wall Street?  The next time you get a letter in your mailbox, think about how many injured and maimed postmen are being sacrificed on the altar of greed.

But I digress.  Let’s get back to talking about steam trains. 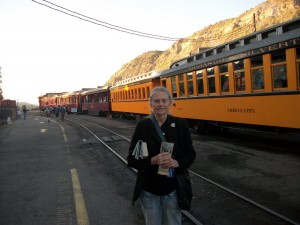 The Durango-Silverton train is rated as one of the top ten steam trains in the world — and that’s an obviously well-deserved rating.  Not only is it totally fun to be riding on a genuine old-fashioned steam train, but this small-gauge railway meanders through some of the most beautiful scenery on the planet.  Pristine wilderness.  Clear air that smells like honeysuckle and pine trees.  Sparkling streams.  The whole Deep Nature enchilada.

Riding this train also reminded me of James Howard Kunstler, a well-known author who writes about stuff that will probably comprise America’s future once our current “cheap oil fiesta” is over.  And here’s what Kunstler says about trains:

“People are talking about building a high-speed railway these days but that’s not going to happen — if for no other reason than that we can no longer afford to lay the required new track.  However, what we do need to consider is our current rail system in the face of increasing oil scarcity.  As we face the increasing destability of America’s suburban living arrangement, we HAVE to come up with better public transit.”

“When we bailed out General Motors, we should have told them that one of the conditions of the bailout is that they’ve got to build rolling stock too.  Dick Cheney even tried to eliminate Amtrak.  We are in the twilight of Happy Motoring right now and nobody realizes this.  We’ve got to stop pretending that we can keep running America the way that we have up until now.  We’ve got to stop being crybabies, put our shoulders to the wheel and do what needs to get done.” 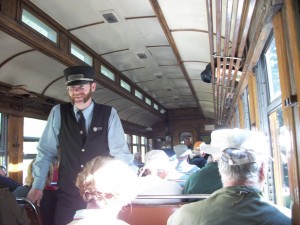 I’m all in favor of bringing back the railroads!

And then when I finally did get to Silverton after three and a half hours of railroad heaven, the big steam engine pulled into a delightfully authentic old-time mining town that sported three (3) different ice cream parlors.  I owed it to myself to sample each one.  And the one with the sign in front of it that read “chocolate-covered insects” got my vote.

But then, just before I was about to hit the road to Grand Junction on the Million-Dollar Highway, someone told me that I had missed a fourth ice cream parlor in Silverton.  Wait!  Stop!  I gotta go back! 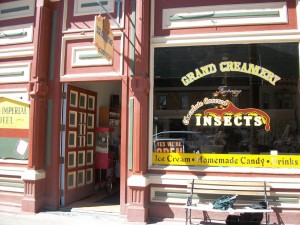 PS:  I don’t really usually live on ice cream all that much but sampling the ice cream parlors of The West has been a rare vacation treat for me, despite the fact that, in real life, I live only seven miles away from the legendary Fenton’s yet rarely go there.

However, I just read where New York City’s mayor Michael Bloomberg is currently trying to ban sodas and other unhealthy soft drinks —  ones that are well-known to cause obesity and diabetes — from squatting on the list of real foods that you are allowed to buy with food stamps.

That makes good sense to me.  Why should our government be paying for junk food of the worst type?  But apparently it’s not that obvious to others.  It seems that Mayor Bloomberg is meeting with a whole lot of opposition from soda manufacturers’ lobbyists — and the FDA appears to be supporting the soda manufacturers on this one.  Say what?

PPS:  The high, narrow, winding, cliff-hanger road between Silverton and Ouray is called the Million Dollar Highway because, according to the local legend, it cost a million dollars a mile to blast it out of the Colorado Rockies back in the day.

PPPS:  While riding this wonderful train, I also got to sing my favorite U. Utah Phillips song.  “Railroading on the Great Divide…nothing around me but Rockies and sky!”

PPPPS:  Here’s the rest of what James Howard Kunstler had to say about the future — during a talk he recently gave at Books, Inc. in Berkeley:

“Tonight I want to catch you up on what’s been happening since I first wrote ‘The Long Emergency’.  We are now witnessing a progression of fiascoes in our culture.  Here in America, we can’t even generate a consensus as to what is happening to us now — let alone act on it.  Delusional thinking is everywhere, not just in the Sarah Palin class.

“There are three forces at work here in America now.  First there’s the financial fiasco — banking, government spending, the financial market and investment schemes — which may put us out of business even before the oil crisis, which is always going on in the background.”  Oil is the second force at work.

And the third force at work on creating chaos in our future, according to Kunstler, is climate change.  “Climate change is effecting our food production.  We now have the lowest grain storage in recent history.  And repercussions from this shortage will generate geo-political anger and resentment.

“Oil, financial problems and climate change all have their effects, but when these forces enter the political realm, they transmogrify into rants on unrelated topics like Jesus, Nascar, etc.  And then we end up with issues that are nuts.”

Kunstler then gave climate-change issues a closer look.  “In the last two years of the Aspen environmental forum, all they want to talk about are nifty alternative ways that you can run cars.”  No one there seems to be trying to wrap their brains around a possible car-less world, which Kunstler seems to think is going to have to happen next, whether we want it to or not.  “And if you can’t count on these people, experts in their fields, then who can you count on?  One man I talked to there simply wants to convert the whole American car fleet over to electricity.”  That’s not going to solve this problem because electricity mainly also depends on cheap oil.  We have to prepare ourselves for a car-less world — and we have to do it ASAP.

Another big problem right now in America, according to Kunstler, is the disappearance of capital.  “Car loans, jobs, incomes, etc. are going way down, and as a result, motoring becomes more of an elite activity.  When you can’t even afford to keep your beater running — there’s going to be major resentment here too.”

Kunstler then reviewed the sorry state of our highway infrastructure and the need to get our railroad passenger rolling stock both geared up and repaired — as a more efficient form of public transportation.  “We currently have an elaborate road hierarchy that is stuplifying, but even with stimulus packages, our roads are going to hell very rapidly.  That infrastructure deterioration is going to be another major problem [regarding the use of cars].  And nobody in the higher-ups is even realizing this.”

The bottom line of Kunstler’s talk was even more scary.  “We’ve got to stop pretending that we can keep running America the way that we have so far.  We can’t.  For instance, techno-grandiosity causes us to think that we are going to be able to run high-speed rail systems.  That’s not going to happen either.  We’re also too broke to do that.  And in five or ten years the airlines will be done as well.  We are in the twilight of Happy Motoring and nobody even realizes this.  We just keep saying, ‘Give us some magic so that we can keep doing what we are doing.’  But now is not the time for crybabies and nuts.  We need to do what we need to do.  But will we?  No.  There’s a remarkable increase of delusional thinking instead.”

Kunstler than signed copies of his latest book, The Witch of Hebron, which is a sequel to his other books on the subject of “What Happens Next” — including World Made By Hand and The Long Emergency.

Jane Stillwater: Not only is it totally fun to be riding on a genuine old-fashioned steam train, but this small-gauge railway meanders through some of the most beautiful scenery on the planet.

The Rise and Fall of the Alaskan Republican Vanguard