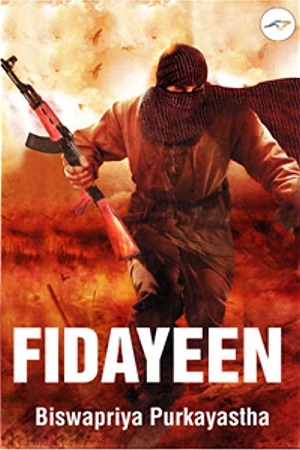 If there was a paradise on earth, it was here, it was here…. But blood plants and the snows of Kashmir, violence hangs heavy on the air, and five different people struggle against the tides of fate: Sabira and Nausheen, a pair of ordinary Kashmiri women, hoping against hope for future to come. Raja Bhattacharya, the army officer striving, to do his duty under impossible circumstances, where whatever he chooses will bring death and destruction. Abu Hassan, the Fidayeen suicide attacker, pledged to give his life for a cause in which kashmir and the fate of its people are only a stage. Their lives and those of others, will be changed forever in the course of a single day, in a war in which everyone is a victim and there is no such things as a victory.

A Subversive Review of Fidayeen

A Review of Fidayeen (Biswapriya Purkayastha)

In a time when the public is being denied access to alternative points of view and any “news” that goes against the grain of either liberal or conservative dogma, Fidayeen, a contemporary war novel by Bill Purkayastha, is a refreshing change of pace.

It may be an eye-opening and even mind-blowing experience for Americans – raised in a culture of guns, games and perpetual war – to consider the uncomfortable truth that in the eastern hemisphere, their “mainstream” has an altogether different view of terrorism, “evil” and the justification of war.

Fidayeen could well be called an anti-war novel, in the sense that it objectively analyzes multiple points of view from a large cast of fictional characters, most of which are armed and fighting for a cause, as well as a few bystanders who are unfortunate as to be caught in the crossfire.

We don’t merely observe war and strategy taking place in the rebellious Indian state of Kashmir – we actually delve into the thoughts, beliefs and even the unique memories of each character. Soldiers, commanders, obedient and disobedient officers, and innocent civilians guilty of only inhabiting a house at the wrong time, share their stories with us.

As the reader, we’re bombarded by imagery both horrific and peaceful, just like the mind of a shell shocked soldier must fluctuate on a daily basis. The fact that Fidayeen doesn’t make clear to us who the real “hero” of the story is, is a testament to the writer’s artistic vision. It’s hard to define or even explain who you “ought” to be rooting for, when every character feels like they have an obligation, and everyone feels like they are – ironically – fighting against “terrorists.” Or infidels, or guerillas, or monsters of some other flavor.

The pacing of Fidayeen is remarkable. Much carnage and yet little “change” takes place in the story, since the action literally encompasses just one day in the lives of these people. The first half of the book establishes characters, motivations, and exposition, while the second half contains the most dramatic narrative. While the action picks up eventually, much of the first half of the book is introspective and educational.

The readers discover that not all Muslims, even the extremists, believe in a literal heaven or “Jannah”. What they believe in, like everyone else does regardless of their region of the world, is that they’re doing the “right thing”. Some characters, such as Fidayeen attacker Abu Hassan, are driven by revenge and don’t care about a literal holy land. The mission matters, not the location. And of course, war makes the world a better place. It has to…after all, why else is everyone fighting?

Bill Purkayastha’s voice as a writer comes to life the most when he describes in caustic detail the beautiful and ugly faces of his characters, which seem to go along well with their perspective of events, and their general attitude about the world.

It’s not surprising that most of these soldiers and leaders are hard to relate to. They’re bitter, they’re jaded, and like real people in the real world, they’re oblivious as to how they should be behaving in order to be likable on an international stage.

This concept of East meets West incongruity is apparent in the character of Loveleen, a fading female journalist, who only sees a “story” in these people’s tattered lives. It’s disheartening to think that most Americans will really only relate to her – only seeing Middle Eastern wars as something the United States must “win” or “govern”, in order to bring peace to the world.

Perhaps some readers would relate to bystanders like Sabira and Nausheen, women who are merely trying to survive the Hell that men have created. But the writer’s writer appreciates meeting more impenetrable characters like Mushtaq, a reluctant rebel soldier, or the world-weary Raja. How does a writer get inside the heads of rebels, “terrorists”, and righteous murderers without simplifying the story for “All Ages”? (Including those high-brow white intellectuals who forget that brown people have feelings and perspectives too and are not just varying degrees of “Evil”)

One of the most admirable features of Bill Purkayastha’s writing is that he doesn’t manipulate his characters to feel or say anything untrue, besides some occasional choppy exposition. They don’t change just because they should – just like most soldiers never do abandon their posts. Just like most people never do reevaluate their prejudices and predispositions about “those people”. They go on believing what they want to believe.

It’s all just another day in the life of someone you will never meet. But at least now, you’re privy to how they think. The most surprising aspect may well be that these people across the world think like you do. We’re shared in our species, our empathies and our powers of direct observation. But somehow, because of nationalistic fervor and commercial war, we insist on forgetting that concepts of “good” and “evil” are manufactured by the governments who rule over our lives.

To see things from an outsider’s perspective is truly a gift, as amazing or as worthless as you yourself choose it to be.

Fidayeen is not an easy book to read, especially when you’re struggling with the depths of depression. There’s not much in the way of redemption or hope, which will be disturbing to many readers. After all, the West was so adept at creating “heroes” and “villains” for the Civil War and World Wars I and II, blissfully ignorant of just how much rape and bloodshed actually took place in the name of morality.

There are a few tender moments, however, which bring the book its humanity, even when things seem to spiral into pessimistic oblivion. The final scenes of confrontation are quite lovely and poetic, whether the author is describing violence and the serenity of letting go, or the tenderness shared between violent and non-violent beings. Great dialog and plotting.

There are dozens of characters to meet and the writer takes such joy in describing each unique perspective that he doesn’t exactly create an easy, linear plot to follow. Just when you get attached to one person, you jump in perspective to someone else and have to relearn and reacquaint yourself with everything that’s happened so far.

Following multiple narratives, in third person, in 24 hours, is an austere literary technique that makes emotional, action-driven writing difficult to pull off. Showing and not telling is challenging when you’re actually telling a story encompassing approximately 100 years (of history, life experience, and memories) and not 24 hours.

Bill Purkayastha is a fantastic writer, just as acerbic as he is highly detailed to an almost meditative degree. While I don’t think Fidayeen gave us Bill’s most imaginative writing, it did a great job of reporting stories that you will never see anywhere else, outside of an international library. It’s not only a book you should read, because it’s truthful, historical and painfully honest about all the taboos of war – it’s a book you MUST read, because right now millions perhaps and billions of people would prefer you not read it and stick to the “real news”. The real news as reported by someone exactly like “Loveleen”, who has carefully prepared an infotainment meal that will reinforce your views and not challenge them.

Fidayeen could well be called an anti-war novel, in the sense that it objectively analyzes multiple points of view from a large cast of fictional characters, most of which are armed and…

Tips for the Newly Homeless

The Hogs of Cold Harbor